Earlier today we ran a review of what was effectively the album launch gig for Wire’s latest album, Changes Becomes Us. We’re complementing that review now with a more detailed look at the album itself.

Wire made their vinyl debut in July 1977, contributing two tracks to the seminal live album ‘The Roxy London WC2’. On a compilation that eschewed slick production in its haste to showcase the new rock n roll, Wire sat uneasily alongside the speed rush of Slaughter and the Dogs, Eater, X-Ray Spex and Buzzcocks, playing the album’s one slow song, the ponderously ironic ‘Lowdown’. But that was an early indication of their refusal to leap on any bandwagon, no matter how inviting. During their lengthy career, they have only ever taken one of the original punk tenets to heart – change.

Invited to play their third John Peel session in 1979, instead of filling their allotted 15 minutes with singles or choice album cuts, they played one improvised piece that lasted 15 minutes. They have always strived to experiment, to explore fresh territory, creating a sonic landscape that has often been imitated. (They have been cited as an influence by everyone from R.E.M. to My Bloody Valentine to Black Flag).

Thirty-six years on from the long-vanished, spit-festooned mosh-pit of The Roxy, Wire have just released their 13th studio album, ‘Change Become Us’. Not strictly a ‘new release’, the bulk of the material is upgrades to earlier releases. Long-time fans will recognise the core of many songs that appeared as raw recordings on the live album ‘Document and Eyewitness’, dating from 1979/1980. But the key word here is reinvention. Although Wire have traditionally refused to rely on playing fans’ favourites (every gig they’ve ever played has been punctuated by ignored requests for their punk anthem ‘12XU’) they have always been prepared to dip into their rich back-catalogue to rework old songs, approaching them from new angles.

The opener, ‘Doubles & Trebles’, first saw light as ‘Ally in Exile’ on ‘Document’. Like all the 13 songs on this album, treated with clean, contemporary production, it has evolved into a lush, multi-dimensional version of the rawer template. The same modernization can be said for ‘Keep Exhaling’ (‘Relationships’), ‘Time Lock Fog’ (‘5/10’) and ‘Stealth of a Stork’ (‘Witness to the Fact’); the latter sounding as if it should start with “1-2-3-go!” like ‘Surgeon’s Girl’ on their first album. ‘Eels Sang’, another which created a discordant racket that got the leather-jacket audiences scratching their dyed heads back in the day, is here played out as a juddery Talking Heads-style funk thrash, while the lyrics are as far removed from a band that originated in the 1977 maelstrom as its possible to be: “Miss Soul a poignant red, Bach wrote songs in Asia Minor, Handy lion switch sale of panther!”

There are familiar staples here, luscious pop melodies melding with ambient soundscapes, as well as more upbeat post-punk outbursts. They have always been masters of catchy song writing (their 1979 single ‘Map Reference’ contains more hooks in 3 minutes 41 seconds than most bands manage in a career). ‘Re-invent Your Second Wheel’ has such lush melodies you half-expect the Cocteau Twins’ Liz Frazer to pop up on the chorus, which Graham Lewis punctuates with cryptic initials. There are also mood pieces like ‘B/W Silence’, where a delicate rhythm is held together by flourishing keyboards. ‘Adore Your Island’ introduces choppy power chords before launching into a breakneck chorus.

‘Love Bends’ begins as a curiously uncharacteristic love song, only to conclude with a more sinister observation: “Love bends the girls, strikes them down from behind, give you night vision, make you stop the cute kind”.

‘& Much Besides’ takes the listener into ambient territory, reminiscent of Coin Newman’s solo material, such as his underwater soundtrack ‘Provisionally Entitled the Singing Fish’.

‘Change Becomes Us’ closes with ‘Attractive Space’, a floating melody that builds to a furious outro with Colin Newman shouting “Percent percent”, in much same way as he did with “How many, how many?” in ‘Pink Flag’ all those years ago. This is the essence of a fine album by a brilliant and important band. Wire may hint at the past, but they have always looked ahead; with a punk heart and an experimental head.

You can stream the album from Wire’s official website which can be found here. Wire are also on Facebook here.

All words by Mark Fleming. More of Marks work on Louder Than War can be found in his author’s archive. 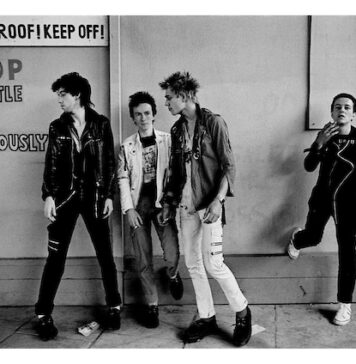