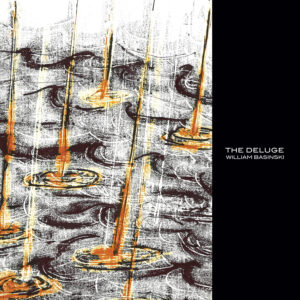 Louder Than War have long been fans of the superb On The Wire presented by the legendary Steve Barker.

“Cascade and The Deluge are variations on the latest tape-loop and delay composition from the inimitable William Basinski. Cascade is the CD/Digital variant, and The Deluge is the vinyl LP companion – pressed on exquisite 180 gram white colored vinyl.

“In Cascade, a single ancient lilting piano tape loop repeats endlessly carrying one along in its tessellating current. In The Deluge, the same loop is processed through a series of feedback loops of different lengths, creating a spiraling crescendo of overtones that eventually fades away to silence. In the denouement, a series of limpid piano loops leads to an urgent orchestral theme that builds and gradually dies.

“William Basinski is a classically trained musician and composer who has been working in experimental media for over 30 years in NYC and most recently, California. Employing obsolete technology and analogue tape loops, his haunting and melancholy soundscapes explore the temporal nature of life and resound with the reverberations of memory and the mystery of time. His epic 4-disc masterwork, The Disintegration Loops received international critical acclaim and was one of Pitchfork’s Top Albums of the Decade. Installations and films made in collaboration with artist-filmmaker, James Elaine have been presented in festivals and museums internationally, and his concerts are presented to sold-out crowds around the world. Basinski was chosen by Music Director, Antony Hegarty to create music for the Robert Wilson opera, The Life and Death of Marina Abramovic which had its world premiere at the Manchester International Festival in July 2011 and toured Europe in 2012 and North America in 2013. Orchestral transcriptions of The Disintegration Loops by Maxim Moston have been performed at The Metropolitan Museum of Art, Queen Elizabeth Hall and La Batie Festival in Geneva, Switzerland. Basinski is currently touring the world in support of his latest works, Cascade and The Deluge.”

On the Wire is broadcast every Saturday at midnight through til 2am.

Links for listening again via BBC’s radio player can be found at otwradio.blogspot.co.uk, or the shows Mixcloud.