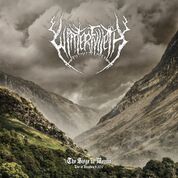 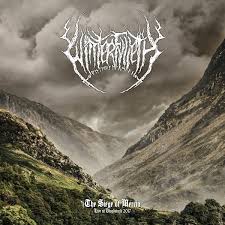 Winterfylleth: The Siege Of Mercia: Live At Bloodstock 2017 (Candlelight/Spinefarm Records)

CD and DVD | Vinyl and Digital

Genre-defining atmospheric black metal musicians Winterfylleth are in stunning form, as captured on this CD and DVD set, live at the Bloodstock Festival in 2017, performing on the main stage, in their tenth anniversary year.

Winterfylleth returned to the Bloodstock Festival main stage on the 12 August 2017 to play a blistering set of the band’s classic material. The following year, the band would put out the highly acclaimed The Hallowing Of Heirdom, a traditional folk-influenced acoustic album. So, the Bloodstock performance feels a pivotal moment in the band’s journey and is well represented on this CD recording and accompanying video of the set on DVD.

Playing to a big crowd, in the sunshine and with a back drop of cloudy blue skies, the band open up with the intense rush of The Solitary One Waits for Grace (The Wayfarer Pt.1), with its dynamic and dense wall of sound, permeated by Chris Naughton’s emotionally-charged growled vocals. A song pause sets off, on the accompanying DVD of the performance, an impressive sea of clenched fists and devil horns. The beautifully sung harmony vocals that close the song show how much Winterfylleth can effortlessly create a range of moods and musical themes within the one song.

The Swart Raven live really shows off the symphonic breadth of their sound. Beginning with a single guitar picking out the main musical phrase, Simon Lucas’ blast beats hammer in and drive the sound towards a massive ringing crescendo of distorted yet wonderfully melodic sound. The pace then suddenly changes in a flicker to a more doom metal like elegance, before the blast beats hit again. The band in another section swing the music, giving it an almost jazz underpinning. Later the sole guitar returns with a beautiful folk refrain, with Chris’s voice chorally soaring, to be joined by the voices of guitarist Dan Capp and bassist Nick Wallwork, before raging again into the blast beats. Literally an extreme metal musical masterpiece.

At this point it’s worth mentioning the striking audio quality of the recording, which was mixed and mastered from the original desk recordings, by metal producer extraordinaire and Conan bassist Chris Fielding. The expansive and nuanced mix gives full weight to the majesty of Winterfylleth’s music. This reviewer was lucky enough to witness this Bloodstock performance, and the quality of the sound on the recording, both on the CD and DVD, puts you right in the centre of what the audience heard and experienced on that day.

Whisper of the Elements commences with some swirling feedback, and then launches into some frenetic black metal rhythms, before being punctuated by Dan’s lovely ascending guitar motif. A gentle mid-song guitar passage has a shimmering psychedelic feel, reminiscent of the west coast guitar sound of the classic Welsh band Man. On the ensemble instrumental parts, the bands evident feeling for and immersion in the music, is strikingly apparent on the DVD, as the cameras switch from one band member to another.

A Valley Thick With Oaks and Defending the Realm finish off the set, with Chris describing how 10 years ago Bloodstock took a chance on a then very young band. Defending the Realm from 2008’s debut album The Ghost of Heritage, concludes with Chris, Dan and Nick melding their voices together in a heartfelt vocal coda, supported by some powerful guitar riffs. The crowd gives a big cheer at the end of a superb set.

Winterfylleth represent all that is best, and risk taking musically, about extreme metal, with a musical ambition that will ensure that they continue to surprise their fans, as they take them on what is proving to be a fascinating musical journey.

Watch the video for The Swart Raven as performed at Bloodstock here: