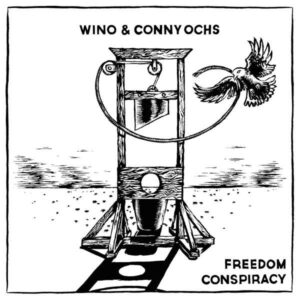 Freedom Conspiracy is the second collaboration between Scott ‘Wino’ Weinrich and Conny Ochs. Wino, to many, will need no introduction; he is a legendary guitarist and vocalist who has created some of the greatest music ever with Saint Vitus, The Obsessed and Spirit Caravan. He was also a part of the sadly short lived Shrinebuilder project. Conny Ochs, by contrast, is a young singer/songwriter from Germany who by his own admission, deals primarily with the dark folk genre. The pair of Wino and Ochs released one previous album together, 2012’s Heavy Kingdom. Their friendship began around 2008 and they have written and performed sporadically since then. Freedom Conspiracy is another acoustic-based release for Wino after his collaborations with Steve Von Til and Scot Kelly on Songs of Townes Van Zandt.

Freedom Conspiracy comprises 13 songs that are largely acoustic. There are flourishes of piano, electric guitar and minimal percussion throughout the album however these only add to the stripped back, raw feel of the album.

Many of the songs are despairing and deal with the harsh realities of life, loss and addiction. Crystal Madonna sees Wino leading the singing with a weary and forlorn tone. The content is an utter lament to addiction and can easily draw comparisons to Cash’s latter day American output. Timeless Spirit’s dark piano undertones along with Wino and Ochs singing in harmony make for a stark darkness that helps create a euphorically dark ambience; it’s one of the ‘heaviest’ things here.

One of the many standout tracks of the album is Shards. The track sees a single drum thud throughout the track as Ochs opens up proceedings before Wino complements with guitar and voice as the pair sing together in blistering austerity. The slide guitar drawl along with the drum makes for another slice of despairing country folk. More slide guitar is employed in album opener Drain too. All of the shrewd additions of musical layers, i.e. slide guitar and piano etc, ensure that the album moves at a pace that both satisfies and allows for introspection.

Dirt Floor and Timeout Blackout are two more highpoints of an exceptionally good album. There is a great gospel tinge in Dirt Floor’s short and sweet southern blues. The more musically uplifting Dirt Floor provides a great foil for many of the harrowing tales here. Timeout Blackout sees the marriage of Ochs and Wino’s voices weave perfectly in harmony. This could be said of all the tracks on Freedom Conspiracy as all are built around the pair’s fragile and sensitive vocal delivery. Another fine example of this is on Forever Gone, probably Wino’s finest vocal contribution across the piece. During the album, only Heavy Heart sees a full band utilised. My initial thought was that it didn’t fit with the album, but it breaks it up superbly and allows for a slight change of pace.

Whilst being largely desolate and gloomy in its content and delivery, Freedom Conspiracy is completely compelling. These are two songwriters wearing their hearts on their sleeves and playing from the heart. It’s hard to switch off once you are under its spell.