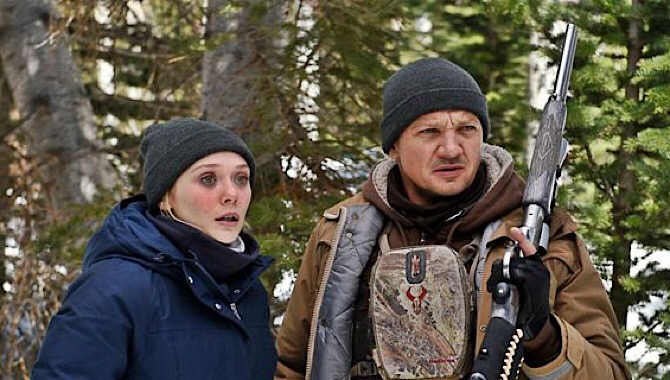 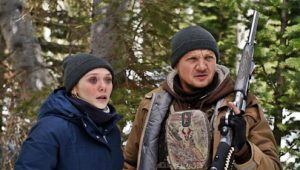 Lee Ashworth finds that life can be short, nasty and brutish in Wind River.

In Taylor Sheridan’s follow up to the highly successful Hell or High Water, a hunter on the frozen winter wastes of Wyoming turns his skills to aiding an FBI agent on the trail of a murderer.

The film grips in the rapidly moving opening scenes. The drama itself encircles the viewer like a sudden mountain storm. Before you know it, it’s a white-out, you’re in the middle of nowhere and you’re knee deep in snow. We follow Cory Lambert (Jeremy Renner) through frosty exchanges with his wife Wilma (Julia Jones), paternal tenderness towards his son (Teo Briones) and a hunt for a rogue lion that transforms into a far more disturbing predator.

The pace, coupled with some deft exposition at the outset, are matched with equally impressive cinematography courtesy of Ben Richardson. In one sense, the almost unblemished snowscape could be anywhere and yet, aided by discussions about the scale of several journeys made by the characters during the course of the drama, we are given the sense of an America that is sparsely populated and retains the remoteness of a contemporary frontier. The sheriff jokes of driving fifty miles by car to reach a place only five miles away as the crow flies and Cory comments that the nearest inhabited house is also five miles away. We are in the big country and things are different here.

Wind River is the Native American tribal reservation through which Cory steers his snowmobile, tracking a lion believed to have savaged some local livestock. Instead of a big cat, he finds the dead body of 18 year old Natalie Hansen (Kelsey Asbille). A fish-out-of-water scenario then ensues with the arrival of FBI agent Jane Banner, played by Elizabeth Olsen, ill-equipped for the hazardous conditions. It is here that several narrative possibilities emerge, all suggesting cliches of one form or another. For the first time, the viewer is released from the grip as the drama momentarily slows.

Wind River teetered on being many other kinds of film throughout its one hour and forty-seven minutes, from 70s style lone wolf vigilante, to odd couple romance and vengeful action thriller. There were fleeting moments when I wondered just which of those films it is trying to be. But ultimately it is a compliment that it never collapses into anything that could be described as truly derivative. Like the lion and the killer, it wrong-foots the audience, toying with our expectations.

Watching this now in 2017, it’s hard to avoid the outraged response that this is Trump’s America: a land of hopelessness and a lack of resources for those far beyond the urban metropolis. There is little for those left behind except the increasingly bristly, Hobbsian fight to the bottom that ensues. But then to regard this as one of the first films in a popular milieu to be set against the backdrop of Trump’s office is to forget that the making of the film, of course, predates it and whereas he provides no solutions to such ills, his election victory is the result rather than the cause of this malaise. In that respect, Wyoming could be many other places.

The back story that emerges reveals that Cory’s own teenage daughter simply disappeared one night, after a party that got out of hand, and was never seen again. This plot line haunts the film, present yet unspoken in all the exchanges between Cory and Wilma… in fact, between Cory and everyone he encounters. Jeremy Renner carries the part with a tender conviction, an Everyman who can fix everything apart from his daughter’s absence and presumed death.

At times, the dialogue is clunky and fails to do justice to the superb plot. It dips into the cadences of pulpy action speak once or twice too often and jars in the process. Despite avoiding the potential and obvious cliches involving the lions in the narrative, it is perhaps significant that their fate is left unresolved. But Cory’s own pain appears to be the only justification for the retributive conclusion.

Ultimately, I found myself leaving the cinema, questioning the perspective with which I was being asked to empathise. An eye for an eye? A tooth for a tooth? This kind of retributive justice fits too neatly into a right-wing, conservative America to be comfortable viewing. We are informed, on-screen, that there are no official records kept of Native American women who have gone missing. Whereas it is certainly innovative to reveal nothing about Cory and Wilma’s daughter in terms of her identity given that in many ways, she is arguably the main character, maybe it is time that stories such as this are told from the female perspective.

Wind River is a compelling watch. The beautifully austere soundtrack by Nick Cave and Warren Ellis only elevates the experience and the sense of loss.