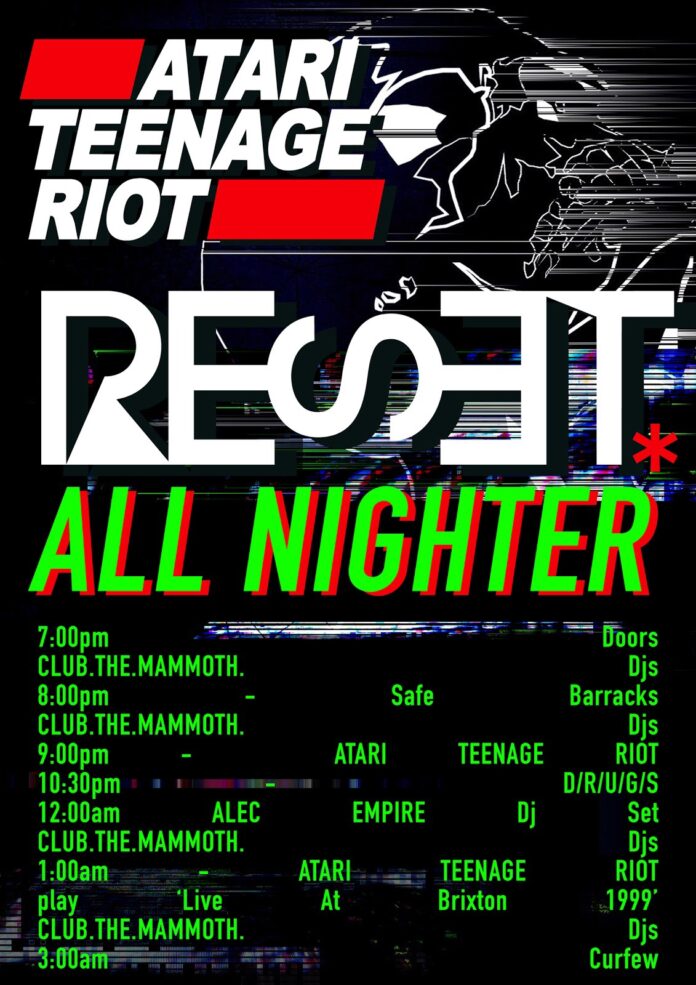 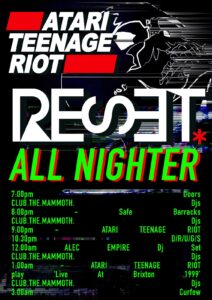 Win a copy of Atari Teenage Riot’s brand new albumReset and 2 Tickets to see the band perform not just one but two exclusive sets at special All Nighter show at The Garage London on Friday 20th March 2015!

Digital Hardcore legends Atari Teenage Riot are playing 2 exclusive sets at their London Show on Friday 20th March 2015! One at 9pm featuring tracks from their with their new album ‘Reset’ and another at 1am where they will be playing their ‘Live at Brixton 1999’ album in full!

As if Alec Empire is not going to business enough doing all that he is also DJing in between sets which also see supports slots from D/R/U/G/S and Safe Barracks.

This is your exclusive opportunity to Win a copy of the new album ‘Reset’ as well as 2 tickets to this once in a lifetime live show show on Friday 20th March 2015 at The Garage in London.

What city are Atari Teenage Riot from?

RESET is Atari Teenage Riot’s sixth album. As with any artist their new record cannot escape the shadows cast by its predecessors but, as its title states, this new release is unequivocally set in the now. RESET revises the agenda for a new age with a timely blast of confrontation.

Atari Teenage Riot still embrace the disruptive effect of seemingly chaotic rhythms and arbitrary noise but also hit home with nerve shredding hooks and bone crunching riffs that characterise the essence of Atari Teenage Riot and thrust the future of visceral mind-searing music firmly into the next era.

More musically diverse than ever, the songs are united by the sense of unease and apprehension surrounding the increasing control governments, and their cohorts in multinational corporations, exert over the common man in their pursuit of wealth and power. Media manipulation is the twenty first century weapon of choice and the resources dedicated to monitoring everything from social trends to an individual’s every activity are truly staggering.

Surprisingly the album is ultimately uplifting and despite the threats we all face the only solution is celebrated too. Atari Teenage Riot reminds everyone that the power to change lies within each of us and it’s not only a right but also a responsibility