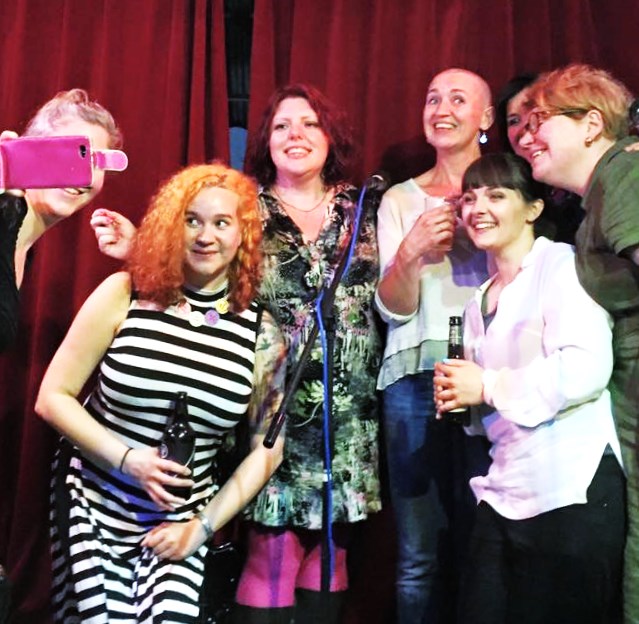 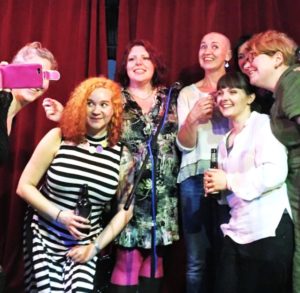 Feminists with a sense of humour! Female bands from London and Southampton form mutual admiration society whilst playing a fun gig.  Ged Babey sings along to a song about his metaphorical vagina.

When I took the mickey out of the Art House – “its very knit-your-own-museli, green-party-boho-chic, rad-fem arty-farty micro-brewery hippy meets hipster heaven”- they ended up using it as an advertising slogan -proving they can laugh at themselves as well as being Southamptons foremost haven for hip hippies, pinko commie Corbynistas and the LBGT community.  When I heard Mansplaining by the Wimmins Institute, I knew there was only one venue they should play in the jewel of the South.

Support band the Tupelo Twins are an on/off group who’ve existed for ten years yet never seemed to have recorded anything. It’s way past time they did as they are hilarious.( They also perform some ‘serious’ songs in a close harmony style -like a rad-fem Andrews Sisters.)  There are three twins confusingly and they do conform to the feminista sista stereotype of being Millie Tant-ish, shaven-headed and duffle-coat wearing women, spelled with two I’s.  But there second song was entitled ‘I’m a Feminist but I have a Sense of Humour’ which summed up their approach – a sort of sweary Victoria Wood with ukelele x3.

The laugh out loud highlight of their set is a bawdy anthem where we are all invited to “come inside my eight miles wide vagina”. The men in the audience and instructed to sing along too after an explanation that the Tupelo vag is not literally eight miles wide but ‘a metaphor’. (It’s actually a cover version – here is the original )

Another life-affirming song for dark times is one written by Grant Sharkey ( local hero and one man protest band & surrealist who happens to be dating a Tupelo Twin) It is probably called Who Fucked It Up and is the funniest state of the nation address you’ll hear.  I hope they get it recorded soon as it has that jarring clash of well-mannered female enunciation turning foul-mouthed and manic.

The Tupelo Twins were a revelation and it was great to see all of headliners the Wimmins Institute sat in the audience literally pissing themselves laughing and cheering during their set….

Due to an administrative cock up the WI didn’t have a drumkit but luckily the Art House had a variety of ethnic percussion instruments on hand, so they improvised giving the set a ramshackle feel but making them sound even more like the Raincoats.  Slick professionalism isn’t really the Wimmins Institute thing, a cheerful amateurism and joyful pisstakery is.  Men are usually the butt of there jokes and they do have a Dawn French, Victoria Wood and Celia Imrie form a jolly hockey sticks punk band vibe – which will either immediately put you right off them or have you cheering Hurrah! and clapping your hands with glee.

The set was made up of most of Bad Ass Lady Power Picnic LP…. plus an encore of the Pirate song – which they usually keep for when they play at kids parties – the message is Grrls can be pirates too and have lots of piratey fun.  The Wimmins Institute poke their collective tongue out at the patriachy which attempts to oppress them and then run round behind it and give it a wedgie – metaphorically of course .  Mansplaining, I won’t explain, what with being a man and all, so here is the video

Nandos too is classic if just for the line “Did you think that you could fuck me because you bought me half a chicken?” So here’s the video for that.

A fun night at a great venue thanks to two bands who seemed to really hit it off, which bodes well for a return visit at some point in the future.

All words by Ged Babey. Photo of both bands having a group selfie nicked from Facebook and probably taken by Bik from the Art House