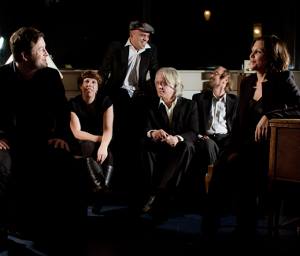 Last month we reviewed the new album by The Delines giving it a pretty impressive 8.5 / 10. The band are now touring, last night playing the Night & Day Club in Manchester. After the show Willy Vlautin spoke with us.

Colfax is their new record, an album written by author and musician Willy Vlautin.  Based out of Texas and Portland, Oregon, the band is fronted by vocalist Amy Boone (whom Willy wrote a collection of songs for, which turned into this offering), and members of The Decemberists, Richmond Fontaine and other friends.  The words and stories told within, tinged with a sense of nostalgia.  Tales of a life peppered with struggle, and often, resignation.

Opening track I Won’t Slip Up refers to the main character’s husband working the late shift, and her own fragmentation as a person, and her feelings of isolation.

“I get so tired of people worrying about me…
Forty five hours a week my boss double checks me
He counts the till in front of everyone before I leave.”

A sense of a life lived via circumstance, misfortune and the human fighting spirit that persists despite the challenges and setbacks.  A woman who uses music to get her though the tough times.

Not unfamiliar themes to songwriter Willy Vlautin who has written four novels, including Northline which depicts its main character and her own struggles, and how she uses song lyrics from her favourite artist to guide her on.  Willy explains how he was able to write this album, using a different approach to that which he used when writing songs for his band Richmond Fontaine, since 1994.

“I always wanted to be in a band with a singer I believed in.  For so many years I wrote songs for my own voice, what I feel comfortable with.  But now I can write songs for someone who can do a lot more.  I couldn’t sing The Oil Rigs at Night but I know she could.  So it’s really liberating for me.”  Willy explains.

The Delines has given Willy’s own writing an outlet that isn’t necessarily restricted by vocal repertoire that he has often used as his benchmark in his songwriting in the past:

“I just don’t have that sorta confidence. So I would have never written that song, but when writing for Amy it’s like the handcuffs are off. ‘Cause she can sing big, classic sorta tunes whereas I don’t think I can. So it’s just fun as hell to write for The Delines.”

The themes within this record aren’t always easy listening — yet Amy’s vocals deliver the subject matter in a totally believable, completely endearing and often sentimental way, that leaves you feeling as though you have been taken on an audio-visual journey that literally uses song to bring you into the world of someone whom you have never met, but you feel as though you know, have empathy for and are really rooting for.

Willy explains how there is much cross-over between his novel writing and the connections between his own psyche and his songwriting, being very centred on the complicated and messy situations that thread through a life really and fully lived:

“I’m so entrenched in those ideas…  I’d written a novel in the third person from the viewpoint of the woman.  For Amy, I took the sex part out of it.  When I write fiction about women, I tend to write them as my sister, or my mother.  I don’t want to fall in love with them.”  Willy says.

His songwriting takes a similar mindset to that of his novel-writing, as he explains:

“My heart is the same in both song and novel, what interests me, scares me, troubles me, they’re the same. My characters all seem to live on the same street and usually my songs could be the soundtracks to the stories. But early on as a songwriter I became a narrative writer, it just made more sense to me, it was easier to get my point across that way.”

Colfax could be the soundtrack to many films already made, set in the midwest, road-trips and dusty never-ending roads.  Parallels between Jack Kerouac’s novel, On The Road and pedal steel from Tucker Jackson adds to this fragility.  But there is something so compelling and beautiful, which sets this album apart — and that is author, Willy Vlautin.  A genuine intuition for his characters and a wisdom, that can only come through pain and overcoming struggle, that reflects within his work.  Final track 82nd Street brings us back to the transient nature of the main character, perhaps a metaphor for her own journey and the more hopeful future she is now headed towards:

“Past the girl still on the streets, going home undone and used up,
already beginning to rust…
The sun is coming up
I ain’t done in, I’m just getting up”

“Characters that are resilient, kind of beat-up.  That’s a subject I’m really fascinated with.”

Willy Vlautin has written four novels:  The Motel Life, Northline, Lean on Pete, and published this year, The Free.  It is this fuel for the fire, which Willy has drawn on in his own fictional works, and songwriting — both in his band Richmond Fontaine, and latterly, with The Delines.

“I wrote a bunch of songs thinking of Amy in terms of…not so much in terms of being a woman, but in terms of struggling and being resilient.”  Willy says.

“In writing Colfax I wanted a late night groove record. I wanted to mix country, soul and atmosphere and marry it to lyrics that were intense and dark, but not bleak. I wanted to make a working class, beat-up, but tough, woman’s record. I wanted Amy’s voice to be the main thing ’cause she’s so damn good and cool. I wanted the record to be the kind you could put on late at night…”  He continues.

“I was so nervous that she wouldn’t want to be a part of it, but luckily, she liked it.” Willy recalls.

And thankfully for us, she was keen to take on this project too, because the world definitely needs these songs, and the stories told with a tender and gracious resilience.  Resignation happens, but it never stays for long.  And this record is a testament to the certainty that nothing is ever hopeless forever.

You can find The Delines online here: thedelines.com.They are also on Facebook and Bandcamp: thedelines.bandcamp.com.

All words by Melz Durston. This is Melz’s first piece of writing for Louder Than War.