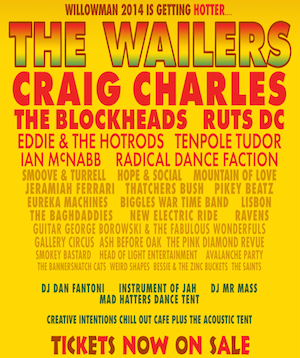 Tickets are now available for a limited period at £65 (which includes four nights camping) online:

The Blockheads, Tenpole Tudor and Eddie and the Hot Rods will all be making an appearance at the four-day festival near Thirsk, which is set to take place June 19 – 22.

Now in its fifth year, The Willowman Festival has gained a national reputation for offering an eclectic line up of both new and established artists, while keeping ticket prices affordable.

This latest line-up news is bound to stir a lot of interest and also coincides with the announcement of the full bill (see below) which is topped by reggae legends The Wailers.

The appearance of The Wailers is expected to draw the biggest crowd yet to the family friendly festival at Hillside Rural Activities Park in Knayton.

Punk, new wave and reggae fans have long enjoyed an affinity dating back to the late 70s. In recognition of this, Bob Marley penned the classic Punky Reggae Party, which name-checked classic punk bands of the time, including The Clash and The Damned.

Together with Ian Dury, The Blockheads enjoyed chart success with What a Waste, Hit Me With Your Rhythm Stick and Reasons to be Cheerful Part 3. Ian died in 2000 but the band continue to delight audiences across the globe with their first class live performances.

Part of the original London punk movement Eddie and the Hot Rods went from supporting the Sex Pistols to Top 10 success with the single Do Anything You Wanna Do.

Tenpole Tudor meanwhile first came to prominence when the band appeared in the Sex Pistols’ film The Great Rock ‘n’ Roll Swindle, and also featured on the movie soundtrack.

The band went on to have hits in their own right including “Swords of a Thousand Men” and “Wünderbar”.

Eddie Tenpole also had TV success as the presenter of The Crystal Maze on Channel 4 in the 90s.

These latest additions to the bill compliment new wave band Ruts DC who will perform class hits Babylon’s Burning and Staring at the Rude Boys at the festival.

Willowman Festival director Steve Williams said: “Once again we have put together an eclectic line-up to generate a great festival atmosphere. We have everything from punk and reggae to psychedelia, funk and indie.

“We are now looking forward to having four days of fun in the sun in a great setting over summer solstice weekend. I can’t wait!”