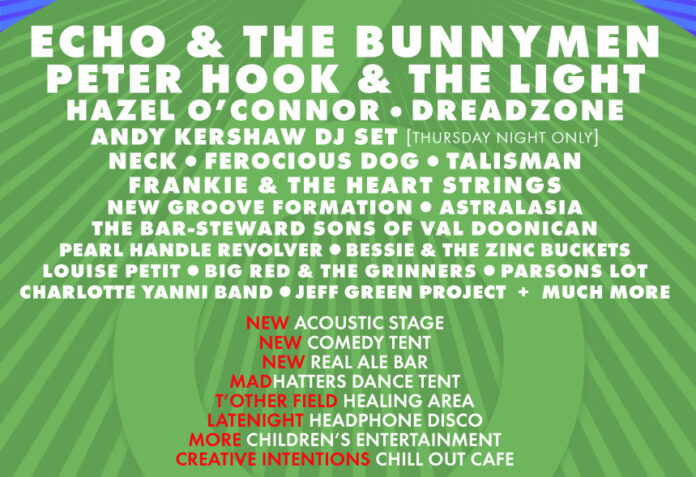 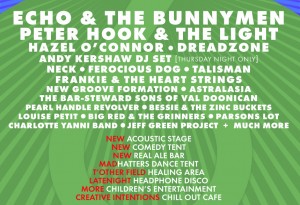 High tempo ska, classic folk rock and driving punk have been added to an all-star line up at Willowman Festival 2015.

The four-day festival in North Yorkshire has already announced co-headliners Echo and the Bunnymen and Peter Hook and The Light.

Festival organisers have now filled the supporting bill with latest editions The Alan Hull Songbook, The Toasters from the USA and Goldblade.

The Alan Hull Songbook will perform classic hits written by the former Lindisfarne singer songwriter and play a number of songs never performed live before.

The act is made up of current Lindisfarne members Dave Hull-Denholm and Ian Thomson, who recently sold out three nights at the Wood Memorial Hall in Northumberland.

The Alan Hull Songbook promises intimate performances of classic songs from Alan Hull who died suddenly in 1995 at the age of 50. Dave, who is married to Alan’s youngest daughter Francesca, had been performing with Alan at his solo shows gigs as well as band performances.

Willowman will also host to a rare UK performance by classic New York-based band The Toasters who have been performing their own blend of high-octane ska fused with stateside punk and rock for over 30 years.

The band is fronted by Englishman Robert “Bucket” Hingley who relocated to New York City in 1980, where already a 2 Tone fan he formed The Toasters in 1981 after seeing The Beat perform at the Roseland Ballroom.

The globe-trotting Toasters have played across the globe, playing from Siberia to Istanbul and back. According to lead singer ‘Bucket’, nothing can eclipse the vibes of a sweaty packed-out club with the audience in your face and the bit between the teeth.

He said: “It’s important not to forget where you came from. Lots of bands do that but not the Toasters!”

Taking to the Willow Wobbly Stage is veteran punk band Goldblade fronted by  Membranes singer and rock Journalist John Robb who runs the Louder Than War website.  John flies the flag for punk while juggling his journalistic career which includes regular TV commentary appearances.  He also wrote a biography of The Stone Roses which was updated to coincide with their reunion shows in 2012.

A stalwart of the music industry, TV presenter, journalist, radio and live music DJ Andy Kershaw will be hosting the Thursday Night Party (June 18th) raging his “one man against musical mediocrity” from the Willow Wobbly Stage.

Andy will be playing a mixture of Calypso, African, Mexican Reggae, Roots, Socha and Ska music during his one man show.

Festival director Steve Williams said: “I thought last year’s line-up was going to be hard to beat but 2015 has come together really nicely.  The headliners speak for themselves and have already had a major positive effect on tickets sales.

“But a great festival is about more than the headline acts.  We have put together an entertaining and lively line-up that will really get the place rocking all weekend long.”

Now in its sixth year, The Willowman Festival has gained a national reputation for offering an eclectic line up of both new and established artists, while keeping ticket prices rock bottom.

The four-day family friendly festival will once again take place at the Hillside Rural Activities Park in Knayton, near Thirsk, over the Solstice weekend between June 18 and 21.

Spring special tickets are now on sale for a budget-busting £75 (which includes four nights camping and free parking) at www.willowmanfestival.co.uk  Full price tickets for the festival will be £85, children 11 and under go free, while young people tickets (ages 12 to 16) are priced at £40.