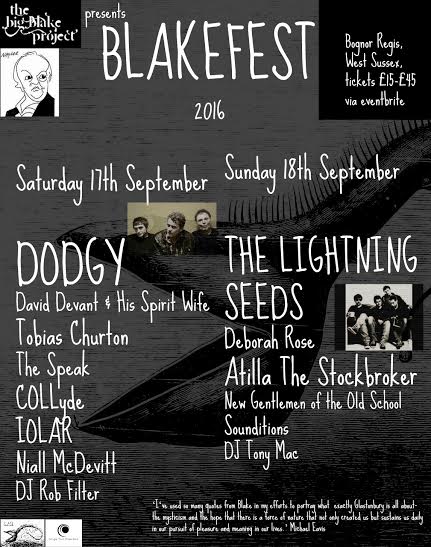 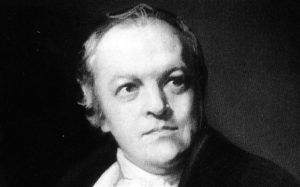 With Blakefest 2016 in West Sussex on the 17th and 18th September, one of the UK’s best loved music critics Chris Roberts connects the dots between William Blake, the poet, painter and mystic and rock n’ roll iconography. 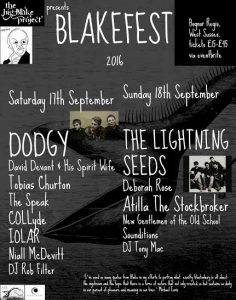 “In my Blakean year/I was so disposed toward a mission yet unclear”, begins Patti Smith’s “My Blakean Year” (from her 2004 album “Trampin’”) later adding, “One road is paved in gold, one road is just a road”. Eventually, the visions of Blake shine a light. Her dilemma is eased by some kind of resolution, or at least epiphany, which is both very Patti Smith and very William Blake. “So throw off your stupid cloak, embrace all that you fear/ For joy shall conquer all despair in my Blakean year”. Mercy, she concludes, shall embrace. Many’s the time Blake has persuaded rock artists to throw off their stupid cloak and put on their clever hat.

Patti is the most credibly poetic of singer-writers to channel Blake’s fusion of fire and compassion, but his influence on big-league lyricists has been widespread. Bob Dylan (“Every Grain Of Sand”), John Lennon, and the Morrisons Van and Jim (see: The Doors’ “The End Of The Night”) have all rummaged in his crystal cabinet for inspiration. As have everyone from self-proclaimed visionary Richard Ashcroft (see: The Verve’s “History” and “Love Is Noise”) to Kris Kristofferson. U2 not only named an album “Songs Of Innocence” but had previously used him as a muse on “The Joshua Tree”, while even Led Zeppelin borrowed from Blake on “Achilles’ Last Stand”.

Robert Plant, visiting Morocco, was reading the poet when he penned: “Albion remains/Sleeping now to rise again”. Blake’s lines in The Dance Of Albion were: “Albion rose from where he labour’d…”
Albion is of course an ancient-mythical name for Great Britain, and few have been as intoxicated by this Blakean notion – and also, admittedly, by most other things – as Pete Doherty.

The Libertines and Babyshambles riffed repeatedly on the idealised concept, with the song “Albion” being the first Doherty’s latter band released. (To emphasise the broad and eclectic range of Blake acolytes, the origin of Albion is explained in the Iron Maiden song “Coming Home”, while underground DJ Bishi’s 2012 album was named “Albion Voice”).

Doherty, who published his typically candid Books Of Albion online, has defined Albion as a utopia, free of any rules or authority. On his wildest escapes into responsibility-shorn drug-taking, Doherty no doubt imagined himself as a Blake for the modern age, perhaps quoting “O Rose thou art sick” at Kate Moss during the come-downs.
While he was misunderstood in his time, poet, painter and printmaker Blake is an accessible writer, the basic thrust of his themes easily grasped by teenage schoolchildren and rock stars.

His own life in London from 1757 to 1827 (bar four years in Felpham, West Sussex) was not however spent in a state of arrested adolescent idealism. Championing the imagination as “the body of God” – you can see how that appeals to rock stars’ egos – his eccentric views were deemed plain old mad by contemporaries. He revered the Bible but slammed the church and organised religion. He admired the French and American revolutions, rebelling against class power, war and slavery. Many claim he was an early supporter of “free love”, though serious academics reckon those interpretations salaciously twist loftier points about man’s inhumanity to man.

When Patti Smith edited the Vintage selection of his poetry a few years ago, it was his earlier work that her choices focused on. This is generally the way, much as the early hits of a musician garner more mainstream traction than their later forays into “interesting” flute-and-percussion world music experimentation. With Blake, the protests against dogma therein play well to the inner punk in rockers. In The Marriage Of Heaven And Hell, the “Devil” is the cool guy, standing against an authoritarian deity.

What could be more designed to appeal to bad boys and girls, who self-identify as “outside of society”? Even in later pieces such as Milton or (the much-misunderstood by rugby fans) Jerusalem, when he’s less concerned with cheerleading for energy over reason, Blake is rooting for self-sacrifice and humanism somewhere amid a complex wash of philosophy and symbolism. It’d also attract many insecure, out-of-fashion rock musicians that Blake was pretty much forgotten for a generation after his death, before being “rediscovered” and rehabilitated.

The passion for Blake displayed by the Beat poets like Allen Ginsberg in the 1950s – and hence the Sixties’ counter-culture – would have trickled down to Dylan, Morrison and Smith. Smith – not averse to reciting or singing The Tyger (yes, that’s the one which starts “tyger, tyger, burning bright”) on stage and explaining how “fearful symmetry” affects us all – has spoken about writing “My Blakean Year”. “I was feeling sorry for myself, unappreciated….and then I thought of William Blake. Such a great artist, poet, printer, philosopher, activist, who died in poverty, ridiculed in his time, almost forgotten.

He never got a break. But in his lifetime he never let go of his visionary powers. He did his work. He got in trouble, could have been hanged for insurrection. He championed women. And he did (this work) unapologetically, without remorse or feeling sorry for himself…just accepted his particular lot and kept on working. He maintained his visions. So what I learned from Blake is…don’t give up. And don’t expect anything. If you perceive in your own imagination that you have a gift, you already have life. Everything else is, as they say, gravy.

“Blake was known for his singing voice, and I’m sure he sang his poems, but we don’t have any record of it. His music is infused in his words.” Bono described “Songs Of Innocence” as all about “first journeys” and “falling in love”, and in Lucifer’s Hands he is “saved” by “new wave music”. “He had a big influence on me growing up”, the singer’s said. “Those two books of poetry Songs Of Innocence and Songs Of Experience gave him a device to be able to write about his past…and the idea gave us the same.”

Let’s not forget Pet Shop Boys’ “Inside A Dream”, which openly quotes (steals from) Blake’s The Land Of Dreams. “The land of dreams is better far/Above the light of the morning star”. Beth Orton sang his Poison Tree on the 2012 album “Sugaring Season”, while Bloc Party stated that this year’s “Hymns” album was Blake-inspired, not least “The Love Within”.

Midlake’s “Winter Dies” from “The Courage Of Others” prompted singer-writer Tim Smith to tell an interviewer that the cyclical nature of life is a crucial element of art. “You see that in so many poems”, he said. “William Blake, any of the older poets…it’s all very earth-centred and aware of the seasons”. Talking of older poets, Donovan’s lyrical “Legend Of A Girl Child Linda” is perhaps as true to the spirit of Blake as any song could be.

Some musicians burn and some are bright, but those whose hand dare seize the fire rarely cease from mental fight. They’re the ones who tend to hear the angels.

The main ticket link is here