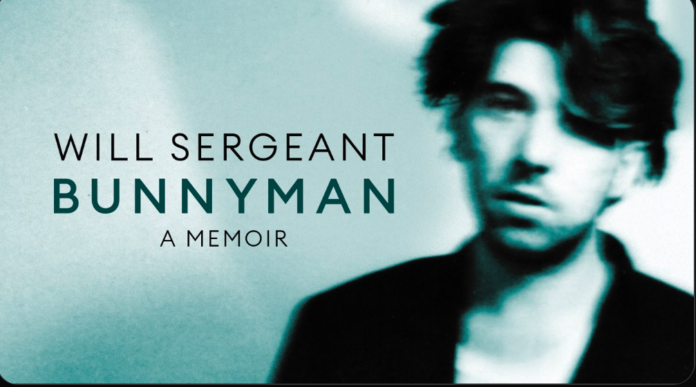 One of the key lines in Will Sergeant’s memoir Bunnyman is the last one, where the seminal guitarist notes that his band’s remarkably effortless rise from arty, provincial post-punks with a malfunctioning drum machine to a major label band in less than a year could lead to him, Les Pattinson, Ian McCulloch and the about-to-join drummer, Peter de Freitas to “turn into a gang of arrogant pricks.”

Outside of being screamed at by Annie Lennox for a parking incident, it’s as close as this memoir sails to the glorious and strange world the Bunnymen created for the pop-music buying public in the 1980s. Those looking for the wider, glitzier arc of Echo & the Bunnymen’s story will have to look elsewhere.

You can also note this pithy ending down as yet another anti-rock moment of Sergeant’s. The Eno fan, sound collagist and creative autodidact has always stuck doggedly to his own course, loving music but never trusting the industry he works in. His book is peppered with typically salty Lancastrian-Liverpudlian observations, about, for instance, the growing industry around punk’s legacy, download culture and the gentrification of festivals. Why stop at the present? In the go-ahead world of post-punk there was always a new hurt to heal. We learn that the band he formed was given a name without his prior consent, and that his own name was misspelled on the debut single. Sergeant’s acerbic sense of humour in the telling of these tales means the memoir sometimes reads as if you’re in the pub with him.

As expected, Bunnyman gives another window on the influential Liverpool scene of the late 1970s. But rather than dishing up another reprint of the Eric’s legend, Will Sergeant presents the company minutes of the birth of the Bunnymen. There is no feeling that this narrative is being embellished because of what came later. In essence, the story is presented as the after-work cultural fixes of a short-order chef from a tough background, who drove his motorbike into the Irish Sea by mistake. Even when the Bunnymen slowly grinds into gear, Sergeant is at pains to impress that being in a band is often a workaday experience. We get fan-facts presented in fastidious detail; those needing to know who played keys or added drum fills on the prototype of ‘Monkeys’ (‘Monkies’) on the Street to Street compilation, or how the ‘Pictures on My Wall’ cover came into being, will get to know. Long forgotten battles are given a quick dusting down: at one point Sergeant has to wear headphones to better hear the drum machine onstage, painting him as some post-punk Cosmic Joker.

Sergeant’s more florid reminiscences are saved for capturing the spirit of those times. He reminds us that Liverpool’s class of 77 punks were “wanting to breathe their own air”; an arresting phrase that feels tantalisingly close to summing up punk’s initial spirit. There are great pen portraits of the bands he and his pals see at Eric’s, such as Pere Ubu and Joy Division and the odd funny aside about the likes of OMD. Perhaps the most captivating of these post-punk diary entries is his description of the legendary Zoo Meets Factory Halfway festival at Leigh in August 1979 with its awful weather, sparse crowds, solitary burger van, fires lit out of a desperation to keep warm and an impromptu cameo from coal miners coming off shift. Sergeant lists it as one of his favourite festivals.

Through all of these passages the reader recognises that Sergeant, an unobtrusive character on the whole, is determined in setting the record straight, good and proper. It feels as if his memories have been checked and counterchecked, to ensure that his take on much talked about incidents, such as him getting together with Ian McCulloch, are set out in as ego-free a manner as possible given the demands of time and memory. Noting the perceived audience Bunnyman is expected to get, it is a wise and fruitful decision.

But there may be another audience for this book, one attracted by Sergeant’s narrative of his early life in a post-war, soon-to-be post-industrial Britain. As Bunnyman details, the Britain of the late 1960s and 1970s was often a country normalised to random violence, bitter division and low expectations: a depressing pattern that was given its initial shape in school and early work experiences. In the context of an ordinary and maybe boorish life already mapped out by the authorities, Sergeant sometimes reveals the unspoken commitment of these three young Bunnymen behind the snark and the cooler-than-thou japes: Ian McCulloch losing it when Sergeant jokes he wants to split the Bunnymen up, or Les Pattinson investing a substantial wad of his own cash in a van. The rarely expressed feeling that making music could be a genuine escape out of the crab barrel.

Alongside stories of teachers chopping off chicken heads and Kirkby’s skin gangs terrorising the local chippy, Sergeant writes of his troubled home life. Understated, slightly blunt in tone, these passages are quietly heroic; the discord and psychosomatic conditions he suffered through his childhood and adolescence set down without embellishment. Most of these troubles are placed at the door of his father, who suffered head injuries whilst serving in Italy. Yet again, the Second World War bleeds its way into the punk and post-punk scenes. This is a subject that maybe needs to be explored more fully in a (counter) cultural context. It is a constant sub-theme in such titles, from Martijn Haas’s brilliant biography of Dutch graffiti artist Doctor Rat, or Jon Savage’s seminal telling of the Joy Division story. These titles, and many others, surreptitiously look back to the war’s psychological and social effects on their subjects’ creations. Sergeant played with a Nazi flag (a war trophy) as a child. He notes the indifference of the neighbours to the hakenkreuz fluttering in his parents’ garden. But back then the pains and traumas transmitted, whether openly or subliminally from one generation to the next, were given few avenues to escape. People just didn’t talk about these things.

Luckily, then, this is not just a rock and roll autobiography. It’s frustrating, though understandable, why it should be presented and perceived as such. To paraphrase Uncle Monty, there is nothing more pedestrian than the modern rock biography. This reviewer has yawned through many. They rarely deviate in format and tone and act as modern pop music always has this past 60 years, giving the public what they think they know they want. Bunnyman wants to do more, it is clear. It wants to be an honest book, and a book true to the band’s core spirit. And Bunnyman manages to do what Echo & the Bunnymen did so brilliantly: be part of a wider story but create an autonomous enclave within it, subject to almost magical laws and precedents. As a read, Bunnyman throws up a few minor quibbles: sometimes the switch from past to present tense could be better managed and at times there is a jokiness in the writing which may hint that Sergeant doesn’t feel he should go as far as he could. But without doubt, his written debut deserves more than 92 happy customers.