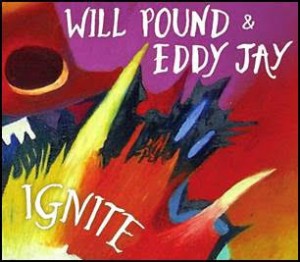 A couple of master musicians in what could be quite a challenging genre. An album of duets between  harmonica and accordion might well be some people’s idea of the soundtrack to a nightmarish  hell. Oh ye of little faith. Pairing up harmonica player Will Pound – a regular Folk Award nominee for Best Musician – with much travelled (musically speaking) accordionist Eddy Jay proves to be a turn up for the books.

If nothing it’s unique, but that would be an unfair and cheap shot at a piece of work  which deserves much more than a lightweight appraisal. Eleven songs in half and hour is hardly a wrench on your time and not much more than an EP in today’s terms yet even on first spin,  ‘Ignite’ proves to be a perfectly apt title for something which is often frantic and  lip meltingly swift.

There’s a freshness in the  almost cavalier approach way in the way they adapt tunes from places far, wide and asunder taking  on jigs, reels, bluegrass and polkas. They also have a go at rachenitsas; that’s traditional Balkan tunes in a 7/8 time popular in Bulgarian dance. A trivial fact which might prove  handy to know for the pub quiz but as a closing number to the album, ‘Rachenitsa’a fair hurricane leading to a breathless finish. The last dash to the finish line in  what’s a pretty fast paced race.

The sources range from self penned tunes and arrangements to arrangements of traditional tunes and compositions from the likes of 2016 Folk Award ‘Best Musician’ nominee and melodeon wiz  Andy Cutting. And yes, it’s just like an intense training regime with a  succession of sprints with the occasional respite before the pace picks up again. It sees Pound and Jay   ducking and diving, buzzing and zipping through a string of tunes. The highlight may well be the combination of the express train hustle of ‘The Crooked Reel’ followed by   ‘Clinch Mountain Backstep’. The latter  originally a bluegrass banjo tune, you can see where the fleet fingered picking translates perfectly for the harmonica.

On the flip of the coin, ‘Richard III’ should be a TV theme tune – the original University Challenge theme springs to mind, or something to do with one of those antique hunting type shows. Inspired by the discovery in a Leicester  car park of the eponymous king – soon to possibly be overshadowed by some of the city’s sporting heroes.  Along with ‘Hangman’ it provides one of the less frenzied and take a breath moments of the album.

Not to undermine the work of Eddy Jay on the album, who provides the backdrop to let Will do his harmonica gymnastic,  it’s the harmonica that emerges as  the dominant presence and it’s easy to lose sight of the part Jay plays. And Will Pound isn’t just a harmonica player. He can do things with a harmonica that you don’t hear these days. Occasionally verging on what could well be described as brutal,  if he were a long haired guitar wielding hero he’d be hailed as the next big thing – hail the  Eddie Van Halen of harmonica.

Watch Will & Eddy performing ‘Floating Candle’ from the album in a live session:

You can find the Pound & Jay website at : https://www.poundandjay.co.uk/