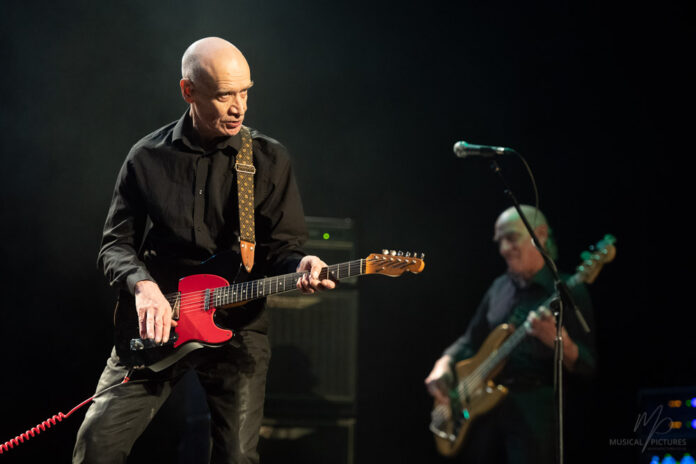 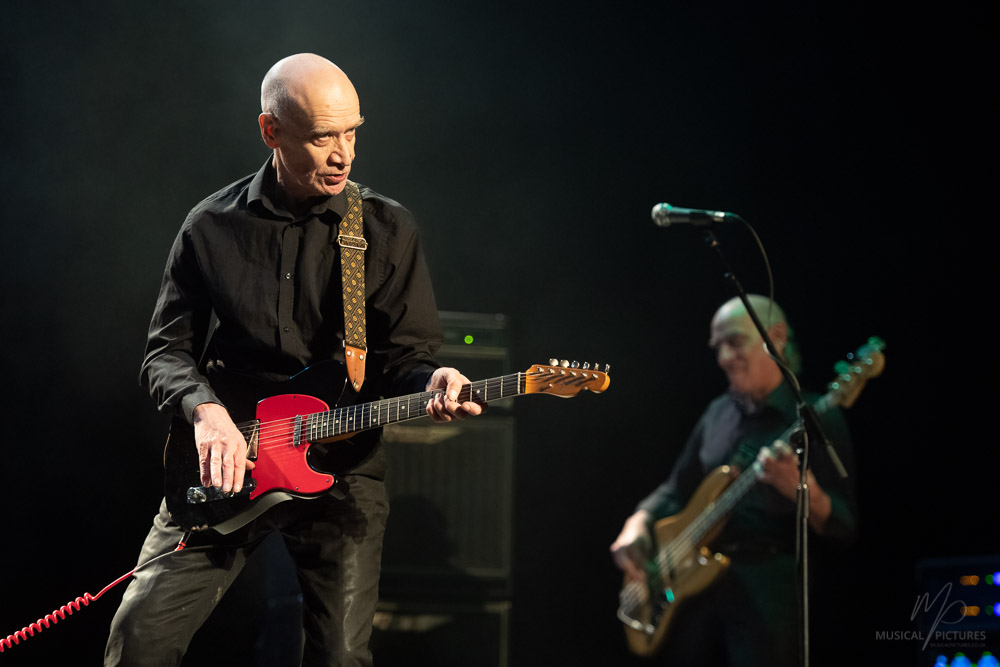 Wilko Johnson and John Otway finally embark on the first of a set of dates delayed by two years courtesy of Covid. Simon Reed heads to the south coast and the Victorian splendour of the New Theatre Royal in Portsmouth to soak up the fun.

If it weren’t for Wilko Johnson, I wouldn’t be photographing gigs. Canvey Island’s finest export announced in early 2013 that he was dying of pancreatic cancer, and only had ten months to live. The dawn of realisation struck that I didn’t have any permanent record of the many Wilko shows I’d enjoyed over the years and that perhaps I ought not to be taking this stuff for granted. It gave me a calling to have a go at documenting live music. Not knowing whether I’d be any good at it wasn’t a reason not to give it a try, and whilst obviously, I sadly figured I’d never attain photos of Wilko, I sure as hell was going to try and snap anything else that moved.

Well, that was the thinking, but Wilko had other ideas. In fact, he defied medical expectations; playing and recording through the whole of 2013, and in the summer of 2014, he underwent pioneering surgery at Addenbrookes in Cambridge. Wilko emerged, free of his pancreas, spleen and a few hundred yards of intestine; but more importantly, free of his cancer. It’s an amazing tale, one told through the lens of Julien Temple in his life-affirming and deeply moving film, The Ecstasy Of Wilko Johnson. I heartily recommend it. For me, it’s meant that the one person I thought I’d never get on the end of my lens has ended up gracing it more than anyone else – and I couldn’t be happier about it.

So, roll forward a decade, and Wilko is still out delighting audiences with his Thames Delta R&B. For this spring tour, he is joined by self-styled ‘Rock & Roll’s Greatest Failure’, John Otway. Whilst technically the support, if you’re planning on attending this tour, get there early since Otway is brilliant and in truth this show is as close to being a double A side as you can get without it actually being billed as a joint headliner.

For anyone unfamiliar with the work of John Otway, a promising rock/folk/punk career was launched off the back of a classic appearance on the BBC’s Old Grey Whistle Test in 1977. Otway writhed, tumbled and inadvertently trod on Wild Willy Barrett’s fuzzbox before sealing the deal with a failed jump onto the guitarist’s amp, effectively writing off the equipment, the performance, and Otway’s plumbs in the process.

A hit single, Really Free followed. Otway’s childhood dreams of pop superstardom looked to be on the cards. And then… nothing. A succession of flops; in fact, a complete failure to impress upon the charts that lasted for decades – hence Otway’s ‘greatest failure’ tagline, which has formed the basis of his shows ever since. 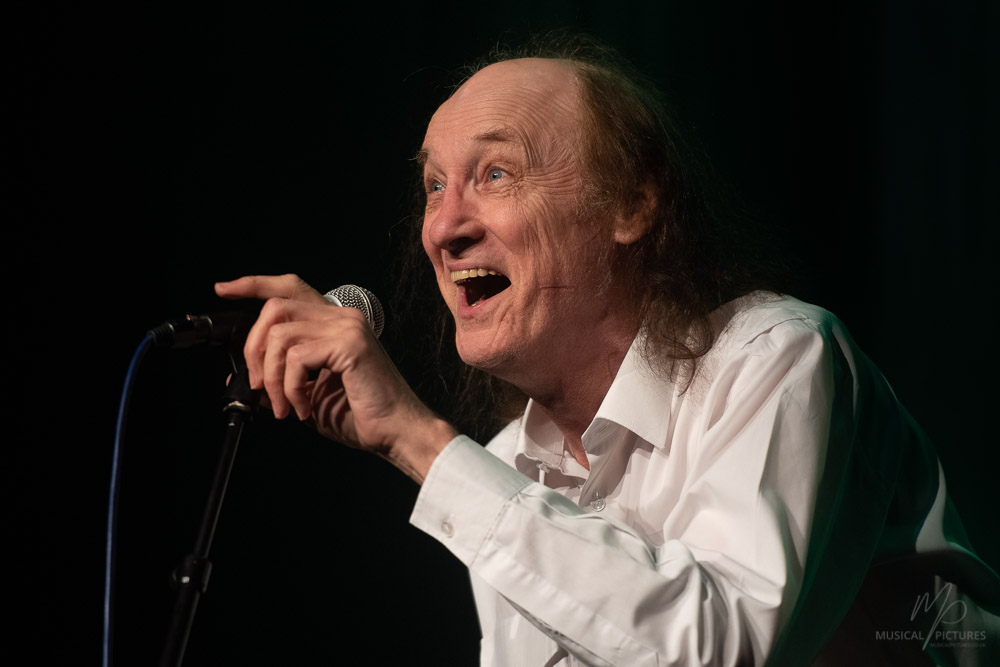 It seems appropriate then that he opens the show tonight with that hit single – Otway’s self-deprecating humour to the fore. In fact, the performance is as much stand up as it is pure music. Every song is really an excuse for a comedic routine and I’ve no complaints there because John Otway really is a genuinely funny, entertaining man. This act has netted him a very large, and very dedicated, enduring fanbase.

He plays the B side to Really Free, Beware Of The Flowers – or, to give it the full title: Beware Of The Flowers (‘Cos I’m Sure They’re Going To Get You Yeah). We learn that in response to a BBC poll to mark the millennium and to find the greatest song lyrics in 2000 years, the very large, dedicated, enduring fanbase contrived to bring Beware Of the Flowers in at number seven. This beat out Bob Dylan and put it only one place behind McCartney’s Yesterday. 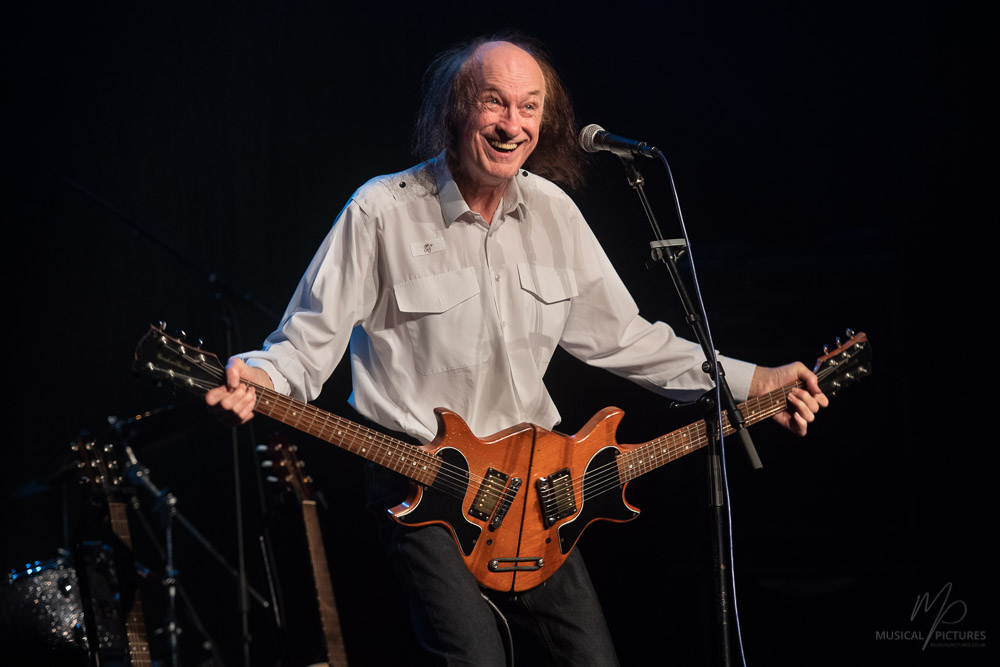 Next, Otway brings out a double-necked guitar. Not a conventional one, obviously. With it he plays a spirited cover of The Sweet’s Blockbuster. Halfway through, we discover it’s hinged in the middle. When he chooses, he can practically wrap the two headstocks around his ears.

There are plenty of other set-pieces. Faithful stooge Deadly the Roadie assists John with automated backing vocals on Middle Of Winter and Bunsen Burner. An uncontrollably bouncy coat hanger mic holder is fashioned for Louisa On A Horse. Call and response heckling is employed for a cover of House Of The Rising Sun.

He closes the set with Headbutts. An everyday tale about headbutting things. For Otway’s interpretive performance style, this means headbutting the microphone, frequently, and with intent. I’m pleased to say he emerges from the first night of the tour without facial injury. It doesn’t always end this way. 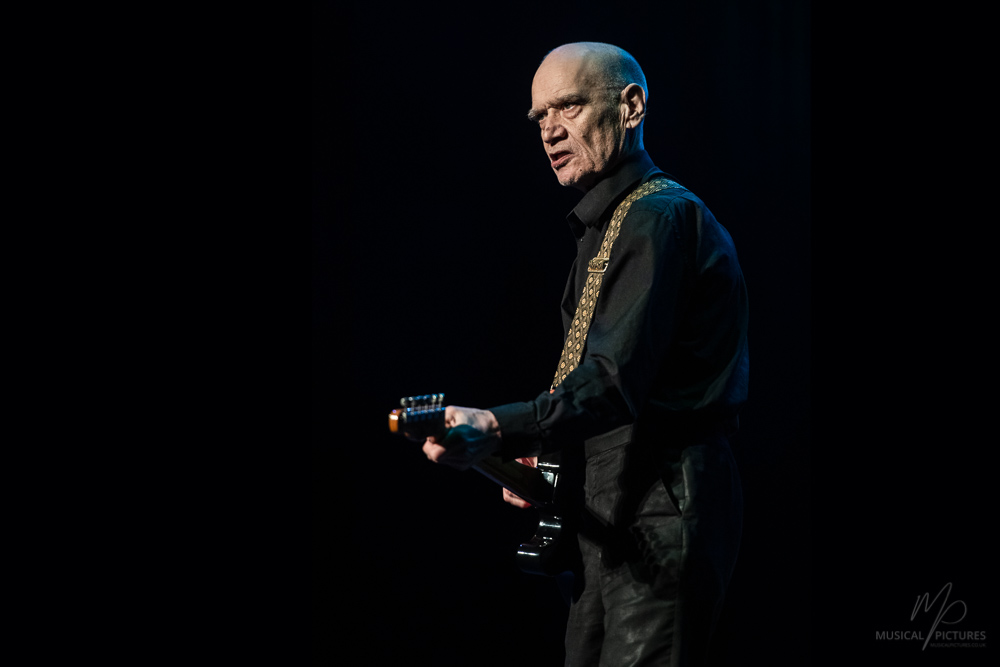 Wilko and his band come to the stage in contrast to the way in which Otway left it. Dressed exclusively in black, with no fanfare and no conversation with the audience, Johnson lets rip with the familiar sound that he’s always had – a Telecaster, an amp, a coiled lead that expands and contracts as he moves to and from the backline and absolutely nothing else. It’s raw, but it’s straight and it’s true. Wilko’s party trick is apparently playing lead and rhythm guitar at the same time. It’s one he still pulls off with style and it all helps round out his unique sound.

But it’s not just the music which identifies a Wilko Johnson show. There’s an undercurrent of hugely entertaining faux menace, which underpins the entire performance. In the excellent extended When I’m Gone, Wilko snarls and gives paranoid stares from behind that iconic Telecaster. The guitar substitutes for a machine gun, which is used at intervals to mow the audience down. In the 1970s, he was famed for his amphetamine-fuelled darts across the stage and staccato dance moves. Wilko still does the moves, albeit at a slower pace these days. At age 74 and missing some significant internal organs, I think we can forgive him that. 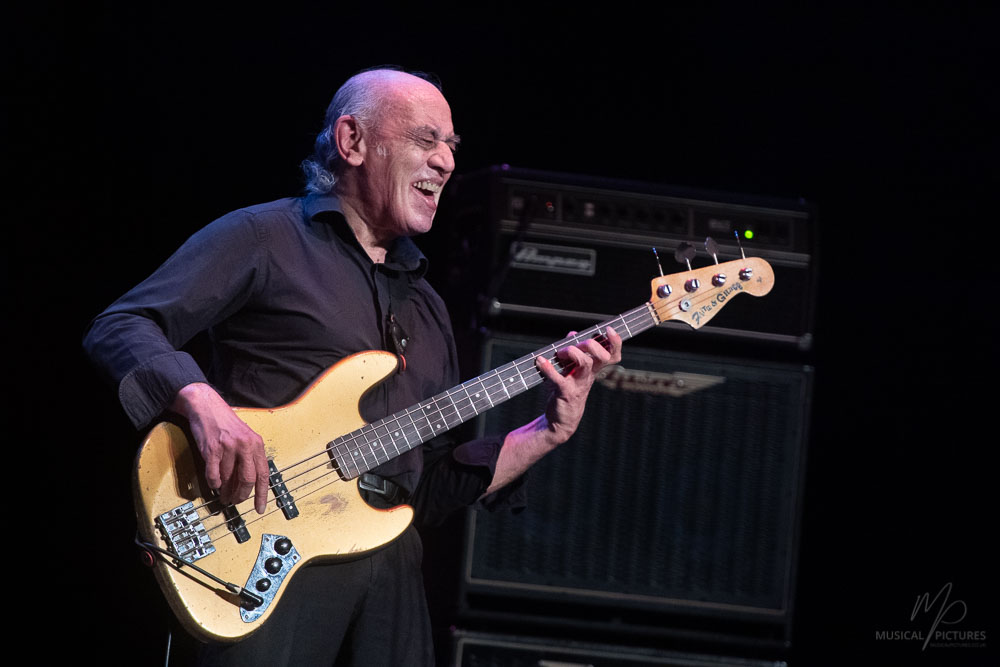 Johnson has had the same band for many years and Norman Watt Roy (bass) and Dylan Howe (drums) are superb. Watt Roy played bass in Ian Dury’s Blockheads, where he and Wilko met during the latter’s brief post-Feelgoods stint with the band. If you come up with the 16th note bassline in Hit Me With Your Rhythm Stick, you know you can really play the bass guitar. Dylan is the offspring of Steve Howe and brings to the drums the same level of virtuosity that his dad gave to the guitar parts in Yes. Dylan also played in the Blockheads for a time.

Norman’s extraordinary bass riffs almost sustain some of these songs on their own and he gets an extended workout in the tune Everybody’s Carrying A Gun. It’s hard to believe watching the speed with which he plays that he’s also a septuagenarian. Wilko rests his arm on Norman’s shoulder for a time. The mutual respect and friendship between the two of them is clear to see and really great to watch. Howe also takes a solo spot and there’s a fantastic and much deserved reception at the end. 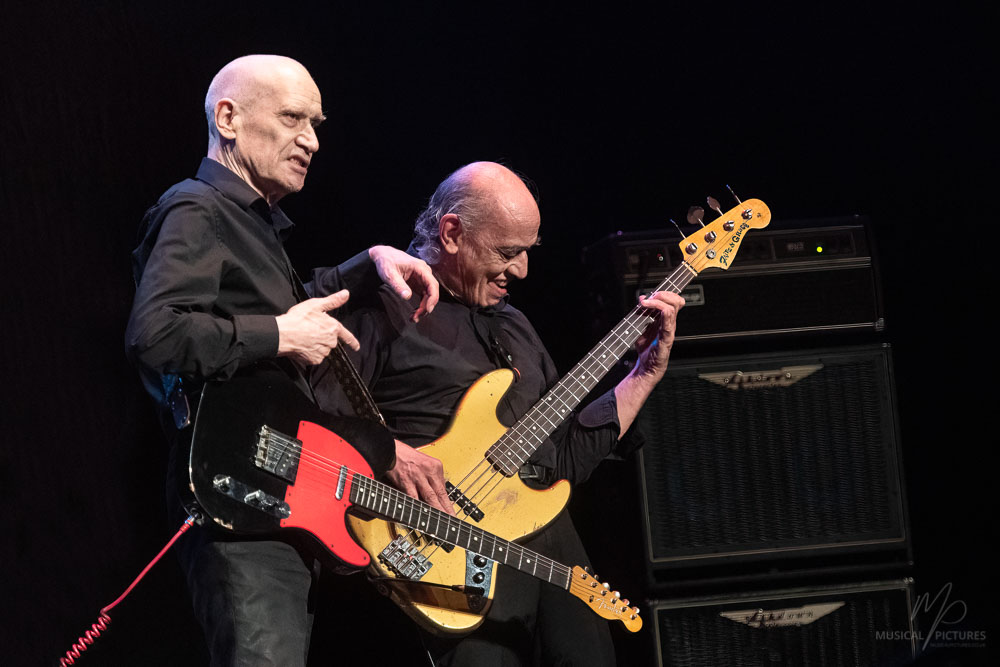 The band generally don’t hang around between songs, but at the close of Everybody’s Carrying A Gun, there seems to be a bit of confusion in the trio. “It’s two years since we’ve played so we’re arguing about what we’re gonna play next!” explains Wilko in one of his rare interactions with the crowd. They play the Dr Feelgood classic Roxette. There’s no argument from anyone in the theatre.

The main set closes with a brace of Dr Feelgood’s finest: Back In The Night and She Does It Right and the band walk off to great applause. It’s clear the audience misses this as much as Wilko, Norman and Dylan have missed delivering it.

They come on again. Quickly. There’s no pissing about with drawn out demands for an encore at a Wilko Johnson show. They play another extended tune, this time Chuck Berry’s Bye Bye Johnny. “I have to see if I can remember this”, says Johnson under his breath before they kick it off. I wonder if he said it out loud without realising. No need to worry though, because remember it they do, and as it ever was, it’s absolutely brilliant.

When Wilko sang the ‘Bye, Bye, Bye, Bye’ lyric whilst waving goodbye at his ‘farewell’ shows following the cancer diagnosis in 2013, grown men sobbed in the audience. I know this to be true, because I was one of them. It’s heart-warming to know that these days when he does it, he doesn’t really mean it. The band take it down. Dylan plays a shuffle. Norman engages in more bass guitar pyrotechnics and Wilko plays some fabulous two string bends. It builds and builds and builds and then they walk off. There’s a Standing ovation and the lights go up. It’s over in 80 minutes, but it’s 80 minutes I’ll repeat for as long as Wilko wants to do it.