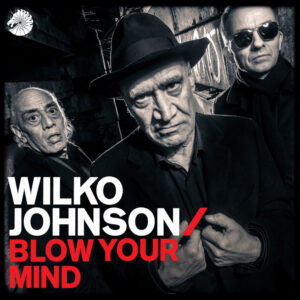 Wilko Johnson should be dead. But he’s back with a new album that sounds like his life depends on it. Andy Duke reviews the Canvey Island native’s Blow Your Mind.

I was initially excited and worried in equal measure about this national treasure’s first offering of new material in some three decades. Yes, he cheated death. But would his remarkable recovery from a terminal diagnosis, not to mention the long wait for fresh songs, be at the expense of the music? My worries were thankfully put to the side as soon as Beauty, the opening track from Blow Your Mind, made its authoritative presence known to my speakers. Detailing the changing relationship with an ex-lover during different periods in his life, Wilko’s distinctive Telecaster attack is anchored by clever wordplay and a snarling vocal delivery. There’s a freshness to this album’s delivery that is incongruous with what one would expect to hear from a musical veteran’s long awaiting return.

The chemistry between Wilko, Norman Watt-Roy (bass) and Dylan Howe (drums) is a thing to behold live and it’s been captured beautifully on the album. Recorded at the famous Rockfield Studios in Wales, the trio sound powerfully dynamic with grooves coming swift and fast throughout each of the offering’s twelve tracks. The band’s unique sonic signature has been well served by Dave Eringa at the helm. This legendary producer last collaborated with the ex-Dr. Feelgood guitarist on 2014’s Going Back Home – Johnson’s critically acclaimed collaboration with Roger Daltry. The rhythm section of Howe and Watt-Roy is truly a force of nature. On Tell Me One More Thing, the Blockheads bassist makes an uncharacteristic nod to Dylan’s father’s band (Yes), by unleashing his inner Chris Squire.

Although there is sense of fun in the album’s consistent and jubilant stomp, some of the lyrical themes are juxtaposed to the musical revelry. This is noticeable most acutely on Marijuana – the first single from Blow Your Mind and a work that’s undoubtedly been inspired by Wilko’s battle with pancreatic cancer. Despite its dance inducing groove, this harmonica laden ode to THC explores the protagonist’s dark thoughts while waiting for death to arrive. “Somewhere out there. In the dark. In the night. There’s a clock ticking out my time”. The elation of keeping that timepiece at bay certainly impacted on the feel of this track and the rest of the album for that matter.

Comprising of a dozen songs and a running time of forty-two minutes, Blow Your Mind is no-nonsense rock album par excellence by a band who are at the top of their game. May that clock keep its distance from Wilko’s door for a long, long time.

You can check out Marijuana from the album here