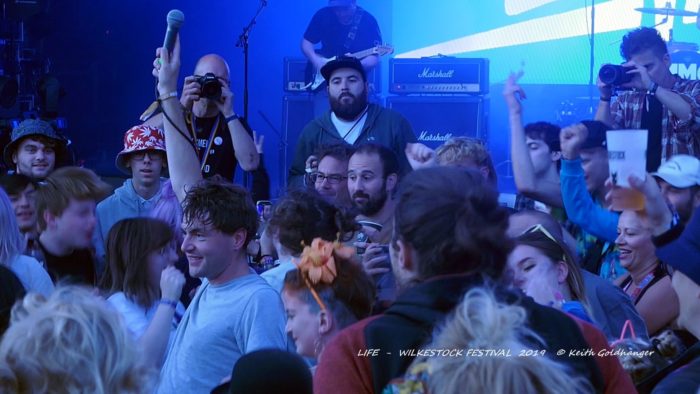 Wilkestock Festival is now in it’s 12th year and therefore we decided it was time to pop along to have a look. Keith Goldhanger eased himself in gently and describes what he saw.

After a short seven hours at this festival we left wondering if there were still any additional nooks and crannies we failed to discover at this lovely little festival. At a guess we’d suggest the attendance here may have just about reached four figures. We found at least four areas of musical entertainment, countless wooden tunnels leading into one or two of them, and on one more than one occasion we felt we were dancing ten feet underground when in fact we’d forgotten the slopes leading up to the stages and the surrounding bales of hay covered in tarpaulin, or wooden sheds that we imagine are sitting dormant for the rest of the year. The natural amphitheatre located with the main stage at the bottom of the slope means festival-goers can stand at one of the bars at the back or slump themselves in one of the dozens of recycled sofas if dancing their socks off to one of many up-and-coming emerging artists has taken its toll.

There’s a children’s area adjacent to this boasting inflatables for any youngsters not interested in watching the bands or any of the cartoon films being shown on a large screen at the top of the site. The whole arena is no larger than a standard football pitch, it takes five minutes to walk around, there’s no sound overspill in between stages, and the food stalls have their own small area meaning we’re not subject to the smell of chips every time we wander around. One could compare it to Glastonbury’s Strummerville but with more stages, more venues and tiny twists and turns that lead to something of decent quality around every corner.

This three day event has had one or two of us earmarking this weekend in order to have a longer look next year. On the day we attended we managed to catch Kent trio LADYBIRD (below) who seem to be gathering serious momentum since twelve months ago when we first crossed paths. LIFE (top picture) appeared and played us a selection of new tunes from their forthcoming album out in a few weeks time to coincide with a lengthy tour including one or two shows with The Kaiser Chiefs in big arenas. Drum and bass DJs that seemed to be going hell bent for leather all day were situated inside one of the small areas that punters would exit via a large bell tent, and elsewhere impressive sounding local singer songwriters took turns in standing at the mike.

Wilkestock 2019 was a short, sharp and impressive experience that we nipped into without our tents for the day. We could have stayed longer and seen SLAVES and we could have arrived early and caught BILK (we could have stayed for three days and spent the following month recovering from it too). The camping area looked spacious with showers that those wishing to scrub up daily could use without a three hour queue.

Wilkestock 2020 may be a different story for those of us who have been in a position to squeeze another festival into the summer. This one is located just outside Stevenage, which took about half an hour on the train from central London. We’ll gather more information for any hungry late summer festival-goers in advance of next year’s event. The profits from this event go to charity: Leukaemia research (beating blood cancer) and Keswick Mountain rescue. Stay tuned, watch this space and come along with us next time.

Words and top photo by Keith Goldhanger. More writing by Keith on Louder Than War can be found at his author’s archive. You can also find Keith on Facebook and Twitter (@HIDEOUSWHEELINV).