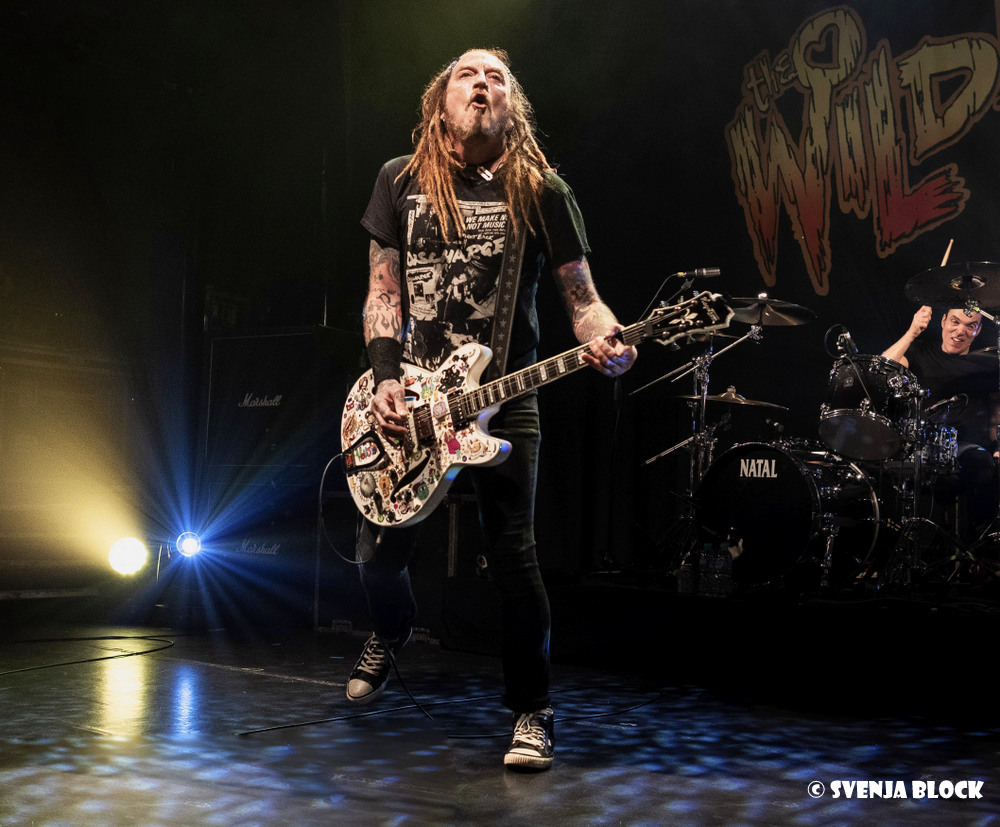 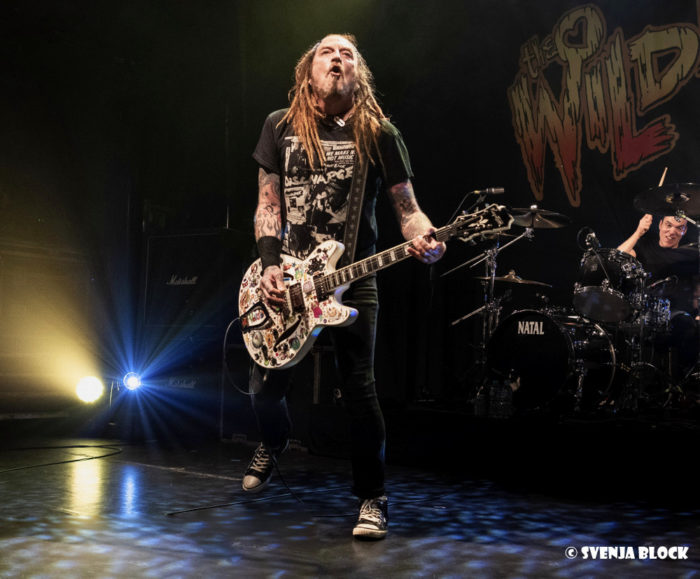 The Earth vs The Wildhearts is 25 years old and the band celebrated the silver anniversary of their debut release by playing the album in its entirety at London’s KOKO. Louder Than War’s Andy Duke was on hand to witness a jubilant performance and discovered that the struggle is still real beneath the triumphant reception.

Playing a well-loved album from beginning to end live is usually only reserved for a one-off tour or outing. And, with their game changer of a debut, The Wildhearts have only done this two times on previous milestones in 2008 and 2013. Toasting the quarter of a century mark, the filled-to-capacity crowd’s mood is electric as the band kicks off their set with ‘Greetings From Shitsville’. It’s a testament to the power and catchiness of the material that Ginger can hold off on singing the track’s first verse in favour of the audience without any loss in impact. From the barriers in front of the stage to the nosebleed sections high up in the heavens, the 1,400-strong attendees are captivated and under the band’s spell with immediate effect.

Despite his own mental health issues and run-ins with the law being well publicised as of late, Ginger is looking extremely well and appears in good spirits. Bassist Danny McCormack is also standing stall and effortlessly delivering fat bass lines from his low-slung Fender Precision despite recent life-altering surgery. Four songs into the set, however, and after the press photographers have been instructed to leave the pit – the South Shields-born musician positions himself on a high stool with assistance and remains there for the duration of the gig. It is a testament to his dedication and incredible strength that McCormack is onstage and rocking out with The Wildhearts in any capacity following his partial leg amputation two years ago. While his playing remains tight and authoritative as ever throughout the set, it’s occasionally apparent that he’s in pain and likely to be feeling a bit uncomfortable to be comparatively static onstage. To this reviewer, however, it’s a truly remarkable achievement to be giving two fingers in the face of adversity and I’ve every confidence that the stool’s presence will become less of a necessity as McCormack feels more comfortable with his prosthetic leg in the future. 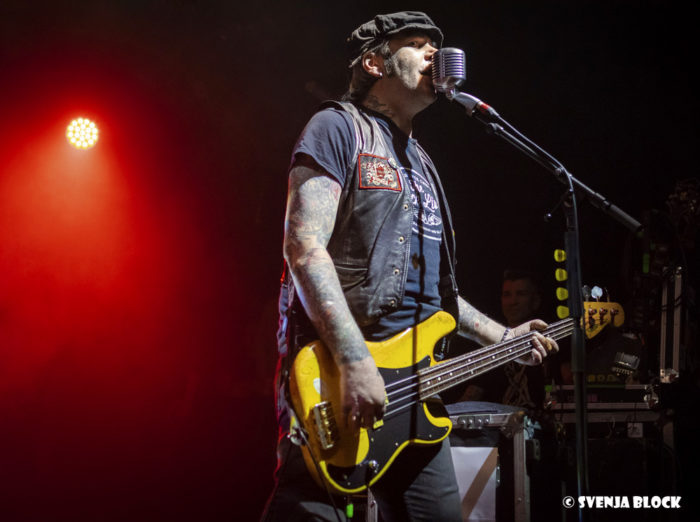 The Wildhearts’ debut album is a rare example of a rock record that’s all thriller and no filler. And this same description applies to the band’s live interpretation of it at KOKO. Delivered in tighter-than-cramp fashion and infectiously received, it becomes abundantly clear that the quartet’s sound transcends nostalgia and still feels fresh and relevant today. The twin axe assault of CJ and Ginger, who are sporting Gibson & Hagstrom double cutaway guitars respectively, also creates a meaty wall of sound that Cheap Trick’s Rik Nielsen would give a fleet of five-neck instruments for. Theirs is a rare example where the live article is actually bigger sounding than the epic recording they’re reproducing. Anchoring the foursome’s almighty chunk is Ritch Battersby’s thunderous skin bashing. So effortless is his performance that it’s easy to forget that he’s adapting the work of original drummer Andrew Stidolph into his style. Fusing the worlds of metal-infused hard rock with pop is a difficult balance to carry off without being either overbearing or cheesy.

The Wildhearts, however, are masters at convincingly pulling off this fusion. Balance is strong with this lot. Battersby’s commanding drums certainly add extra muscle to the heavy parts of the album live but he’s also deft and sensitive enough to play for the better of the song when restraint is called for. With their anthemic top line melodies, the vocals remain front and centre in the mix. Ginger successfully merges Robin Zander-esque sweetness with a gruff underbelly and continues to be served by his bandmates AND the accommodating crowd with powerful backing vocals aplenty. 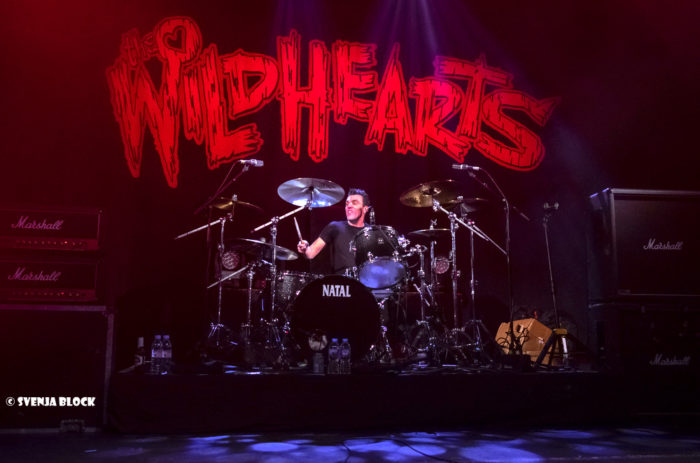 Following the highly-charged performance of their debut from beginning to end, the band take a break and return for a second set featuring a further seven tracks that span six of their other subsequent albums including ‘Anthem’ from 1997’s Endless Nameless. Featuring McCormack on lead vocals, the group’s performance lives up to its title despite a slightly reserved delivery from the bassist. From a pure audience engagement point of view, ‘Geordie in Wonderland’ is an undoubted highlight of the encore set and sees the hands of every attendee waving in time from left to right, and back again, during this quasi-Celtic rocker of a number. Closing off the set are the back-to-back powerhouse of ’29 X The Pain’ and ‘I Wanna Go Where The People Go’.

Prior to finishing their first set, Ginger asked the rhetorical question “who would’ve thought that we’d still be doing this album 25 years later?”. Here’s to another 25 years. Long live The Wildhearts. 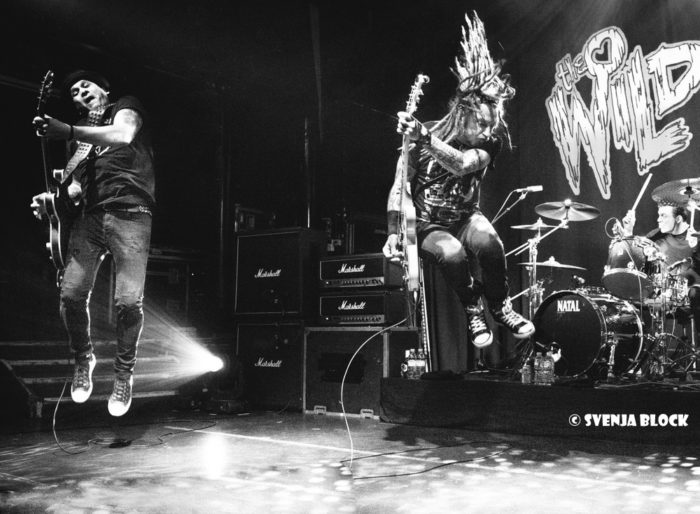 Photo © Svenja Block. You can find more of Svenja’s photos at her Pixieset, Facebook and at her Louder Than War author’s archive.