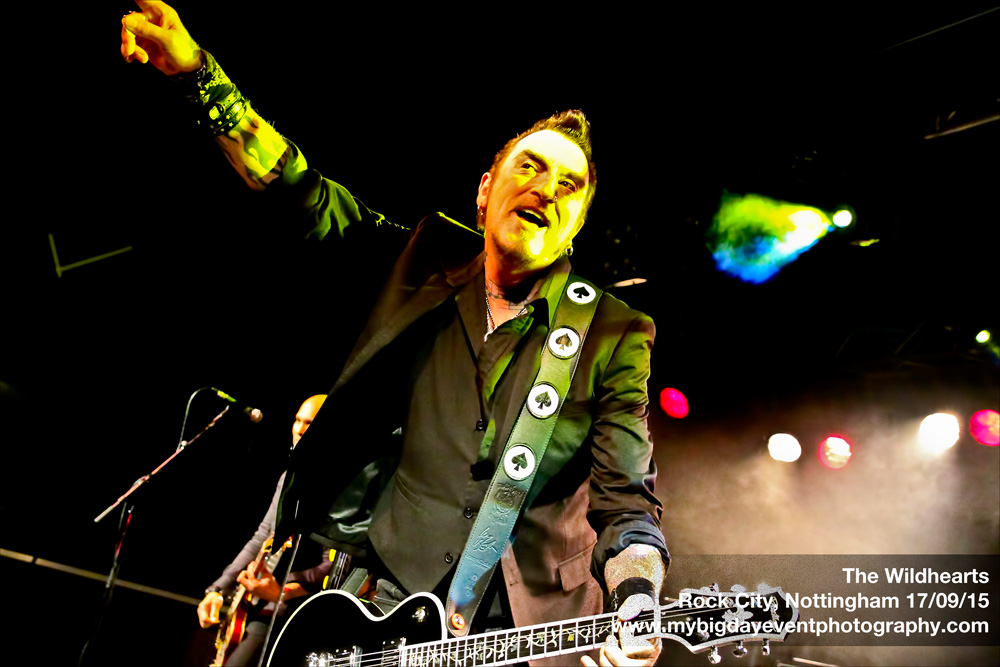 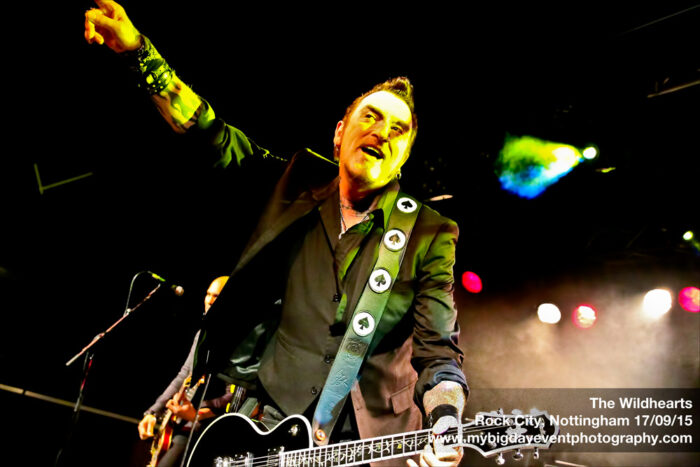 Rock City Nottingham for The Wildhearts and the show starts at six fifty and I know there’s a full undercard and all but it doesn’t seem right somehow. I mean, Emmerdale hasn’t even started yet and we’re pogoing along to Hey! Hello! like demented things. All right other people are pogoing along to Hey Hello! and I am stood at the back watching them and making notes. But it can’t be right can it? Not at teatime. But there’s a ten o’clock curfew so early kick off it is.

Hey! Hello! is Ginger Wildheart’s other band, a collaboration with Victoria Liedtke and the creators of my favourite eponymously titled album of 2013 (Louder Than War review here). Their numbers are boosted from two to five for their live incarnation, delivered in front of a Frank Kozik backdrop featuring the lowbrow artwork from the album cover and their set is some of the most fun I’ve ever had stood at the back of a big hall watching other people go bonkers to music. Pitch perfect post modern power pop, sly, knowing, and immensely fun. 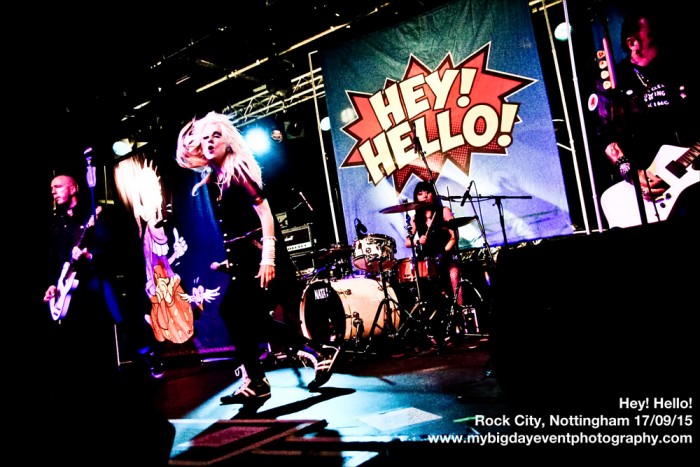 Standing in for (replacing?) Victoria Liedtke on vocals is Hollis J from Love Zombies and she’s a force of nature, roaming the stage, stamping and kicking and punching the air and the result is high energy glam rock with just enough underlying garage band ramshackling to keep the whole edifice from coming crashing down on itself under its weight of irony.

Highlights are Swimwear and Black Valentine and the one disappointment is that there is no place in the set list for How I Survived The Punk Wars, the single that introduced most of us to Hey! Hello!. Maybe next time, but then again maybe not because by then there should be a whole new album out to choose from. That’s something to look forward to. 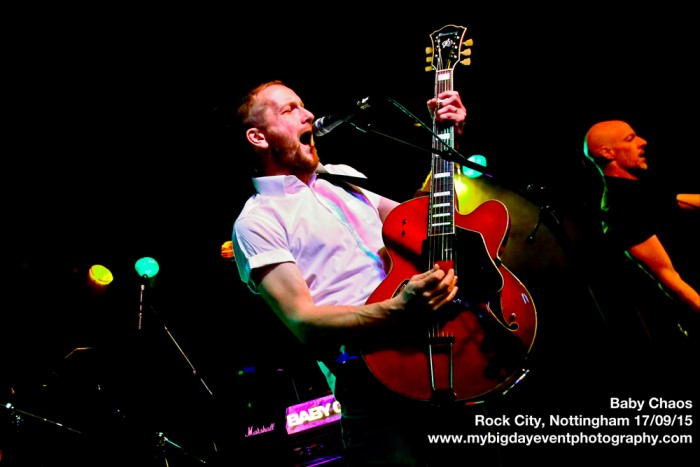 Up next, the newly reformed Baby Chaos, all the way from sunny Glasgow. They were the first band signed to the Electric Honey, Glasgow Kelvin College’s in house music label, which gave first breaks to the likes of Belle & Sebastian, Snow Patrol and Biffy Clyro. After seventeen years away, some of which they spent recording as Deckard) they’ve bounced back this year with a well reviewed new album, Skulls, Skulls, Skulls, Show Me The Glory (Louder Than War review here). Their set has all the hallmarks of 90s Britrock, riff heavy, melodic and smart but they’re at their best when they break up the rhythm with sections of choppy counterpoint.

And then on to the main event of the night. This gig is a complete play through of the 1995 masterpiece that should have been an even bigger masterpiece, P.H.U.Q. which Ginger establishes early on is to be pronounced Fuck and not Fuck You.

The Wildhearts are one of the bands that became favourites of mine as a result of editing posts on Louder Than War (alongside Sleaford Mods, The Fat White Family, Antlers and The Lovely Eggs among many others), and this is the first time I’ve seen them live. I’ve been looking forward to it for a long time and it more than lives up to what I’ve read about their live shows. What comes across most strongly, to a Wildhearts novice like me, is Ginger’s remarkable knack for combining quality songwriting with melodies that just grab you and won’t let go.

It being an album playthrough show the set list is no surprise but I’m really surprised by how much this album has become a part of my life over the past year and a half. From the first chords of I Wanna Go Where The People Go it’s like being in the company of an old favourite. V-Day is great – I’ve read in several places that it probably stands for Valentine’s Day but whenever I play the album, and even more so live, I think I hear an extra syllable in there as if Ginger is singing VE Day. Yeah I know that’s not the title but it bloody sounds like it to me. Just In Lust is a classic rebuff and so much classier than just a shag and Nina Nitro is sensational. The band are on great form throughout a set that has enough energy and changes of pace to make even a tired old bastard like me feel almost middle aged again. It’s the slower, more melody driven tunes that get to me on this album though and for the stand out number of the evening is Jonesing For Jones. I think you’re supposed to like the loud ones best but I love this one, just can’t help it. 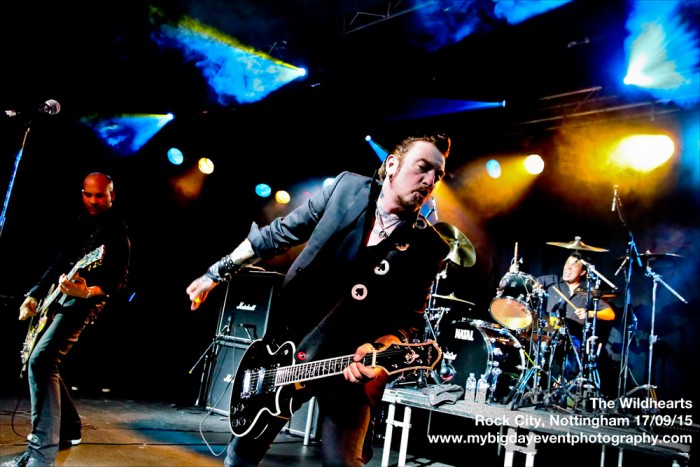 PHUQ having been completed with a storming Getting It/Don’t Worry ‘Bout Me and after a well earned breather Ginger announces that the band are now going to play every other song they ever wrote and they launch into Vanilla Radio. Watching him working the crowd is a fascinating experience in its own right. He reaches out to take a piece of paper from the front row and starts to read it out only to discover that it is just a collection of pictures of cocks. “Thank you for that,” he says. “They all look the same mate. Are they all yours?” 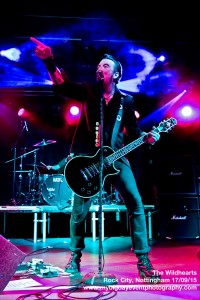 He’s one of those performers who give the impression that they pretty much live for being on stage. There’s something about the way he approaches the microphone with one shoulder dropped, guitar held horizontal and turns to the other band members between lines that reminds me of Springsteen and while I am speculating about the possibility of writing the whole review as a Ginger/Bruce comparison piece the man himself renders the whole exercise pointless by pulling a bandana from his pocket, (lucky it was there really), and putting it on, (“even if it makes me look like Springsteen”), ostensibly to mop up the browfulls of product descending from his impressively slicked back quiffage. With a “this is our favourite Springsteen song” he’s away again.

By the time the early finish comes round with the Cheers theme – Where Everybody Knows Your Name – most of the crowd have been dancing for the better part of four hours and have pretty much exhausted themselves and I’ve had as good a night as I’ve had for a long time. Fantastic stuff. My first Wildhearts gig. First of many hopefully.