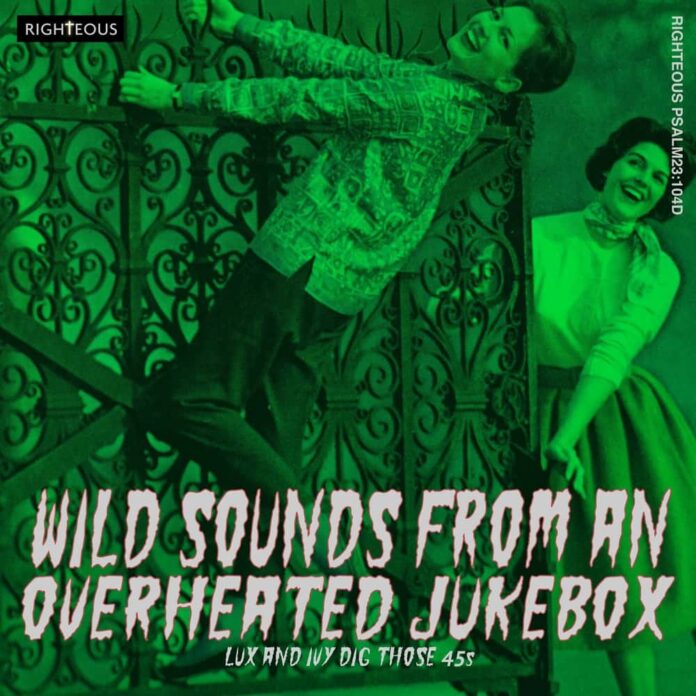 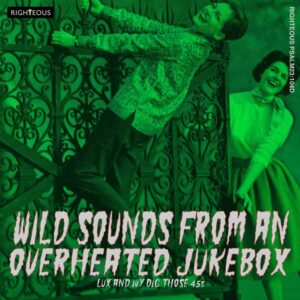 For Wild Sounds From An Overheated Jukebox, Righteous have trawled another 50 lunatic tracks from the depths of a discarded Select-O-Matic, carefully remastered them and neatly bundled them into a 2CD release with sleeve notes courtesy of MOJO Magazine author Dave Henderson. As ever most of these no-hit wonders (sadly failed) to shine as brightly as the excessive amounts of chrome, steel, coloured glass, and plastic panels that invited you to deposit a dime and make your selection – that’s not to say none of these forgotten gems deserve to languish in obscurity for any longer!

Just how did Bud Spudd And The Sprouts fail to score a hit with dance craze The Mash? From the opening vocal yelp to the blues heavy guitar that leads you through the essential moves ahead of a honking sax, and barked instructions; turns out it was Buds sole release, however as Little Junior he did turn out a couple of Gospel releases for the Fuller label in 1964. Lenny Johnson’ Walk Ginny Walk is a similar chugging number, complete with by today’s standards inappropriate lyrics concerning Ginny’s ‘wiggle’ which sets locations such as New York and ‘an Indian Reservation’ alight’ whilst Sid King And The Five Strings offer up Purr, Kitty, Purr which was released via Columbia in 1956, to secure a decent copy of one of those will set you back at least £25, which renders this entire collection a bargain. Another track that can command a hefty price tag is the wonderfully deranged brass driven 500 Pound Canary courtesy of Jules Blattner And The Teen Tones, complete with baritone “chirp chirp” vocal barbs – though this pales to country tinged divorce Court barb from Larry and Dixie Davis via their 1960 debut Mental Cruelty, poor ol’ Larry complains his wife lies to the Judge citing ‘Mentally Cruelty’ as she isn’t gaining the “excitement of the honky tonks” which lets the Judge rule in her favour – this one was later covered by Buck Owens and Rose Maddox who took it to #1 on the Billboard chart. 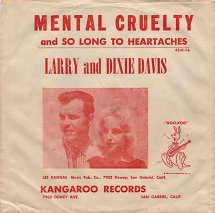 Cindy Malone appeared on the earlier Righteous release Fast Jivin’ Class Cutters High On Booze with the genius Weird Beard; it’s so good its been included here again, but neatly leads into other hirsute advice in the form of That Goatee’s Got To Go from Dick Summer which is a true jazz oddity, this one came out in 1959 via K-W Records from Indianapolis, whilst the badge for the most valuable vinyl to be included goes to the novelty genius of Al Katraz And The Breakouts who put out Charlie And The Bank Job on Solitary Records back in 1962 – a copy of this will set you back at least £250!

Arthur Godfrey would be buried under the clamour of racial appropriation were Heap Big Smoke to be released now, a red-headed white slicker with a song chock full of dubious lyrics and primitive tribal drumming, and even a second-rate Mr Magoo gets a vocal yelp. The Daywains appear with Heartbeat – this one doesn’t even appear on Discogs, I can find no information, that said it certainly sounds like something Poison Ivy would have appropriated into a Cramps original, a blazing surf, guitar picking instrumental that could have been the seed for something like Sunglasses After Dark – this is brilliant! Duane Eddy is the guitarist in The Threeteens who penned a love letter to Elvis with 53310761, which refers to Elvis’s US Army serial number, whilst Sonny Cole takes it one further with, I Dreamed I Was Elvis which is based around a simple rock and roll motif and dogs barking!

That Chick’s Too Young To Fry came from Louis Jordan who offers up this jump jazz belter from 1946 – probably the only track here to have only been released on 10“shellac, and certainly the only one to offer couched advice to avoid possible child abuse charges!

Disc Two is equally enthralling, The Memories offer up Little Bitty Girl – a sax driven tale of unbridled love for a lady competing with Tom Thumb in the height stakes, whilst Lonesome Lee’s gravel voiced tones infuse Pretty Please a doo-wop, rocker from 1959 – and another that commands very good money for an original copy, The Threeteens make their second appearance – this time offering up algebraic advice with X + Y = Z, which came out via the Rev label in 1959. Rev are a label that surely warrants a full release of their own – some absolute classics nestling in those long-forgotten archives.

The Little Martian comes from Jan Amber who has elements of both Wanda Jackson and Brenda Lee in this energetic rockabilly gem, Amber only released another two singles and seems to have disappeared into the mists, similarly Faron Warmer who sticks to the tried novelty formula of car-based rock n’ roll, but this one went wrong as they hit a truck which was also Crusin’ Central. Billy Kent just pours so much soul into Take All Of Me, a huge gospel, soul ballad with sweet keys and the massed backing wails of The Adantees, members of which would go onto to provide vocals for Marvin Gaye, whilst The Crenshaws mine the same soul inspired rock n’ roll, it’s well worth noting that The Crenshaws were an alias of The Rivingtons whose Papa-Oom-Mow-Mow famously found its way into The Cramps repertoire. 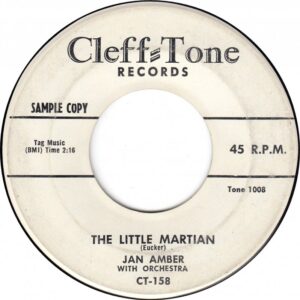 A real highlight is Squad Car from Don Cole, who’s Lie Detector Machine is included on Disc One; Squad Car is like The Shadows on Mogadon, dark sinewy guitar twanging, that somehow sounds at times like an early version of The Cure even though the lipstick abusing Robert Smith would have been in playgroup when this one came out. Al Casey was essentially a session musician who worked with Duanne Eddy, though he had earlier met Lee Hazelwood, with whom he wrote Night Beat, a low paced guitar and brass instrumental with ambient party noises in the background, that leads you into the doo-wop scorcher Hello Schoolteacher! complete with a piercing whistle from The 4 After 5’s who were The Rivingtons (yet again) in disguise. Loy Clingman paints a sorry tale during Uranium Blues that he self-released back in 1955 on his Viv label, warning us “They cost me my wife, made a wreck of my life” 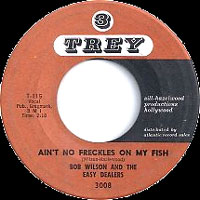 Bob Wilson And The Easy Dealers completes a difficult double; having the spectacularly titled Ain’t No Freckles On My Fish, and it being a stunning skank like brass powered chugger; that said Lee Hazelwood co-wrote this one which makes stringing those notes together a bit easier – anyway there has to have been a novelty dance to go with this one??
And the whole thing is wrapped up by The Renegades, a one-off studio group assembled and produced by Kim Fowley as part of the soundtrack to the 1959 film Ghost of Dragstrip Hollow, which had a plot involving a drag racing club that decides to throw an all-night monster mash party at the mansion, it becomes clear that something is amiss – you can imagine how this one sounds!

Another essential collection from Righteous, 50 tracks of largely failed endeavour, daft ideas allowed within the confines of a recording studio… and for that we should be thankful!

Wild Sounds From An Overheated Jukebox