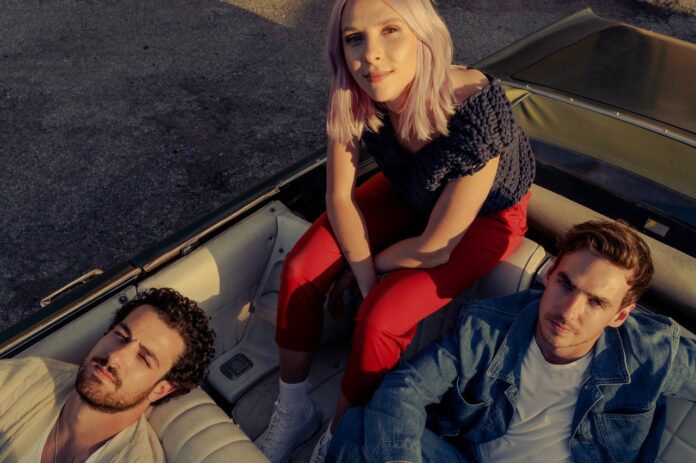 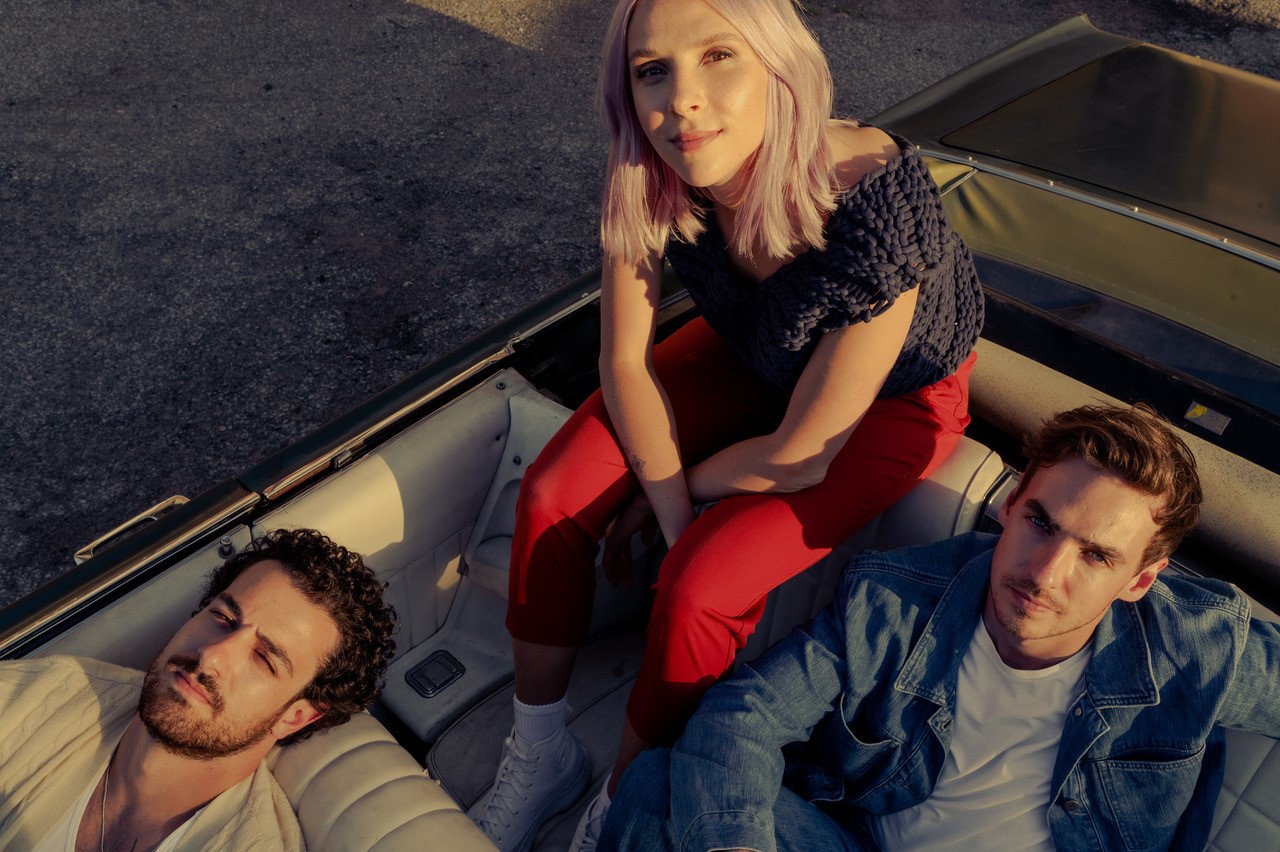 Since releasing their debut album in 2016, Toronto trio Wild Rivers’ warm and gentle update on the early-1970s Laurel Canyon sound has earned them more than 200 million Spotify streams. Tim Cooper talks to lead singer Devan Glover about making their second album in a lockdown bubble, written in California and recorded in Connecticut and Kingston, Ontario.

Sidelines by Wild Rivers, out on 4 February 2022 (Nettwork, all formats).

TC: How would you describe your new album to a stranger – the sound, the mood/tone, the lyrical preoccupations?

DG: It was only after writing the album that we realised some lyrical threads. The songs were born out of a chunk of our mid-twenties, a formative time where we were all trying to figure ourselves out, find our place in the world, draw from past experiences and contextualise their meaning in the present. So a lot of the songs ended up being about that journey, both individually and collectively, since we experience so much of our lives as a group. There are songs about heartbreak, nostalgia, identity, mental health, and longing for a different time or place.

And how does that differ from your debut album and subsequent EPs?

In a lot of ways, I think we touch on similar themes to our other projects because our songs are very diaristic and true to our experiences. However, a lot of the songs on this album are written from a place of reflection and a search for meaning. Some might call it a quarter life crisis.

Any particular songs you’d like to pick out with particular personal resonance?

A favourite of mine from the album is More Or Less: I have a fond memory of the day we wrote it. We rented a house in Echo Park for a few months with the goal of writing an album. Songwriting can be tricky to plan. Some days you write three great songs in a row, and sometimes you can go for weeks without something you feel good about. One night we were sitting in the living room, Khal was looping some nostalgic chords and we were all sitting, reflecting and humming melodies over them. We were all on the same wavelength, and the song happened really fast. It felt like we finally cracked a code after a dry spell. Lyrically and emotionally, the song feels like the thesis statement of the album, which it why we decided to put it as track 1.

Do you have a strong sense of the band evolving as people, as well as a musical entity?

It’s almost been six years since our debut album came out, which is mind-blowing to say out loud. When I listen back to it, part of me cringes about how green we were, and part of me feels so much love and appreciation for the people we were back then. We were young and inexperienced, but willing to do whatever it took to make an album we were proud of and give it our best shot. We had never been in a studio, and we were still finding our footing as singers and musicians, but we had so much spirit and I think that’s what makes that album special. You can feel it. With each subsequent project, we have become stronger musicians with more confidence in our identities as people, as a group, and as players. We’ve been able to explore different sounds and recording techniques, dip our toes in different genres, and move more comfortably around the studio. We know each other’s strengths and how to play to them in ways that are complimentary, and every day we’re evolving and learning and growing together. It’s a constant process. In many ways, I still feel like we’re figuring out our identity every day, but I see that as a positive thing. I look at my favourite bands, and they always find ways of reinventing themselves while remaining genuine. I think that comes as a result of being able to trust your instincts, and all the time and experience we’ve had together has allowed us to get better and better at that as a group.

Your music has been called “indie-folk” and has elements of country, while critics often cite Fleetwood Mac as a parallel. Do you feel an affinity with any particular genre of music?

We love lots of genres and pull inspiration from a lot of different places. I feel lucky that we’re releasing music during a time where staying in a particular musical lane isn’t as important as it once was. So much crossover is happening now, and it’s birthing so much great music.

Do you feel that while you become more cohesive as a unit, through practice and the passage of time, that the individual tastes and ideas of the three individual members of the band come more to the fore?

Definitely. Our musical tastes are aligned most of the time, but we all listen to a wide range of music. I love being in the tour van and being shown new songs from the group that I wouldn’t necessarily have heard on my own. It’s cool to see the different things we hear and focus on as listeners, and that translates into us being able to approach musical ideas from different directions.

Can you tell us a bit about the those different tastes – musical and otherwise – and how they feed into your music?

We love a lot of the same music, but we come from different musical backgrounds. Andrew grew up primarily on hip-hop and has been making beats and producing since he was young. He also has a solo project called Nightshifts which is more synth-based and indie-leaning than what we do as a band, so he brings a lot to the table in the world of sound design and electronic production. Khal grew up on classic singer-songwriters and guitarists, like Nick Cave, James Taylor and Simon & Garfunkel, so he has always been drawn to strong lyricism and the intimacy that comes with folk songwriting. I’m somewhere in between. I’ve gone through lots of musical phases, but I grew up loving soul, pop, indie-rock, and anything with a powerful female vocal identity. Some personal favourites are Amy Winehouse, Adele, Beyonce, and more recently Holly Humberstone, Phoebe Bridgers and Billie Eilish.

How and where did you spend lockdown, and were you able to get together socially and musically, to write and rehearse?

For a large part of 2020, we weren’t able to get together. We were in a studio in Connecticut recording our album on 14 March when we packed up and rushed back home across the border in a frenzy. We had recorded about one-third of the album but we had to find ways to finish it in a pandemic, with Toronto being one of the most locked-down cities on the continent. We waited it out, did some of it remotely, and eventually were able to get together at a studio in Kingston, ON (about 15 minutes from where the band started) to finish the recording process. The whole thing ended up taking a year longer than planned, but in hindsight the time and space away from it gave us really important perspective. We had only ever recorded things in small chunks of concentrated time, and the extra room for reflection definitely resulted in a stronger album.

How and where (and when) did your record the new album – was it done remotely, and piecemeal, or were you able to congregate with your producer Peter Katis (The National, Interpol, Sharon Van Etten)?

We started it in Connecticut at Peter’s beautiful studio. We did some of it at family cottages and cabins around Ontario, some in our apartments and parents’ basements, and we took it to the finish line at the Bathhouse Recording Studio in Kingston, Ontario.

What did Peter Katis bring to the table, and how did it work with him co-producing the album – did you work together, collaboratively?

Since we’re a band, we naturally arrange and produce ourselves a lot of the time when we’re jamming out songs in the room. Being able to bring our arrangements to the studio and get fresh ears on them was important to us breaking our own habits. We’re all really interested in production, so it was great to be able to bring ideas to the table and try different things with Peter. He has produced records for many of our favourite artists of the past 5 years (Paper Kites, The National, Kurt Vile). His approach to capturing and manipulating sounds is unmatched, and we learned so much through the process of watching him do that. He also mixed the record, so he’s skilled at being able to get granular and go deep on finding the right sounds and tones, while still being able to step back and see the bigger picture. He’s also not afraid of things being messy. It’s easy to get caught up in things sounding ‘perfect’ or ‘right’ at the expense of keeping that natural, human element. Peter was great at maintaining that throughout the recording process.

You’ve aligned yourselves to various causes and charitable organisations supporting the environment, helping with homelessness and mental health in young people – how important is it for you to feel you are contributing to society beyond making music?

Navigating a career in music can be difficult and confusing at times. It provides us with the best feelings in the world, and also comes with a lot of hard ones. Being able to step away and focus on a bigger picture always reinvigorates our sense of purpose. One of our favourite things about being a band is being able to connect with and impact our listeners and foster a sense of community. Being able to use our platform to extend that beyond our music world has always been important to us.

Lastly (though perhaps this should have been firstly…) how come a band from a city that’s snowbound with sub-zero temperatures for much of the year has such a sunny trademark sound, redolent of Laurel Canyon in the early 1970s?

That was definitely the music all of our parents played around our houses growing up, and we’ve always been drawn to music from that era. There’s probably also an element of escapism and we wrote a lot of the songs in California!