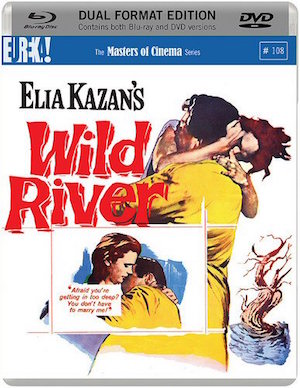 Wild River by Elia Kazan has just been re-released by Eureka as part of its Masters of Cinema series. It’s generally considered to be one of the finest works by both director and actor Montgomery Clift and to be a film that charted new territory for cinema at the dawn of the 1960s. For Louder Than War, Jamie Havlin reviews.

Adapted from two novels (William Bradford Huie’s Mud on the Stars and Borden Deal Dunbar’s Cove) the plot of Wild River on its own isn’t one that would likely get many punters rushing out to see the film.

Based on real events in the early 1930s, when areas around the Tennessee Valley were repeatedly flooded, the movie begins with some archive newsreel footage showing just how much havoc these catastrophes could wreak: an entire building topples over and slides into the river in a matter of seconds and a man tells of the heartbreaking disappearance of some local children.

The Federal government responds by creating the Tennessee Valley Authority (TVA) which is given the task of buying up and redeveloping a radius of flood prone land so that a series of dams can be built at strategic points along the length of the Tennessee River to prevent further overflowing.

This inevitably requires relocating some of those living in the most endangered areas and it will be the job of Chuck Glover (Montgomery Clift) to evict the last remaining residents on Garthville, a soon to be submerged island on the banks of the river. This is no easy task as the landowner, an octogenarian matriarch named Ella Garth (Jo Van Fleet), would rather die than leave her lifelong home.

Clift is one of twentieth century cinema’s most fascinating actors. He worked alongside James Dean, Elizabeth Taylor and Marlon Brando and received four nominations for Academy Awards but throughout his relatively short career he eschewed the trappings of the Hollywood lifestyle and was happy, even at the height of his fame, to live a small and dingy New York apartment. As for his private life, well, that was shrouded in mystery and only after his death did it become clear that he was gay or maybe bisexual.

Lucky to survive an accident when he smashed his car into a telephone pole, Clift was left in constant pain, with his face requiring intensive reconstruction. The incident led to him becoming increasingly dependent on drink and painkillers, embarking on what a former acting teacher dubbed ‘the longest suicide in Hollywood history.’

He was dead within six years of Wild River wrapping although his legend certainly lived on. The Clash and REM both penned songs about him (The Right Profile and Monty Got A Raw Deal) and it’s probably no surprise that Morrissey is a fan. Last month it was announced that an HBO biopic titled ‘Monty Clift’ is scheduled to air later this year with Matt Bomer in the lead role.

If the plot of Wild River might not excite, then the fact that this was the only time on film that Clift teamed up with director Elia Kazan is likely to get cinephiles more excited.

Notably Kazan gave James Dean his first role (in East of Eden), he coaxed a career best performance from Marlon Brando in On the Waterfront and directed everyone from Warren Beatty to Robert De Niro, bagging a pair of Best Director Oscars along the way for Gentlemen’s Agreement and On The Waterfront, before receiving another honorary Oscar in 1999.

He made his name by embracing the techniques of Method acting and helped transfer them from the theatre to the silver screen but he is probably almost as well known for his 1952 appearance before the House Committee on Un-American Activities where he informed on a number of friends and colleagues, who, like him, had once been members of the Communist Party.

In Wild River, he gives us a deeply personal film which features a trio of outstanding performances. The chemistry between Montgomery Clift and Lee Remick as Carol Garth Baldwin, the widowed granddaughter of Jo Van Fleet, is undeniably good. Vulnerable yet strong-willed, practical but a dreamer, I’ve never seen Remick in better form and, coincidentally, she also had a song written about her by Australian band The Go-Betweens, titled simply Lee Remick.

Surprisingly though, it is Jo Van Fleet as Ella Garth who might just give the best performance here and it is almost impossible to believe that the actress was only 45 when the cameras began rolling on the movie.

One of the movie’s most intriguing scenes is when Glover goes to visit her for the second time and she announces in front of him that she is going to buy a dog from Sam, a black farmhand sitting across from her house. Not ask to buy but demand to buy.

It would be easy to assume that this cantankerous old woman is also a bullying racial supremacist but instead she is making a point to the outsider by demonstrating solidarity with the man, who she knows will refuse to let her have the dog. ‘Sam and me don’t sell,’ she tells Glover, when the farmhand points out that she has no right to buy his dog. ‘Sam don’t sell his dog and I don’t sell my land that I poured my heart’s blood into.’

Ella might represent conservative continuity and sentimentality but a forward thinking idealist like Glover can still admire her rugged individualism, even if it clearly goes against the greater good. Kazan examines the issue from several angles and eventually seems to side with Ella and suggest that, in this case, there is a cost to progress.

The director expertly weaves three separate plot strands throughout the film, the battle of wills between the TVA and Ella, the blossoming romance between Chuck and Carol and, lastly, the strife Chuck faces from some local redneck businessmen when he decides to employ black workers on the same pay as their white counterparts.

All three strands are intriguing in themselves but 20th Century Fox never showed much faith in Wild River; it was only given a relatively modest release and subsequently considered something of a box office flop despite earning some favourable reviews. Furious at the studio’s response, Kazan later made an offer to buy back the film’s rights in an attempt to arrange an independent re-release for the film himself but the price quoted by Fox was too high for him to afford.

While not an out and out classic, Wild River is emotionally engaging, beautifully executed and thought-provoking too. It is undoubtedly a great addition to The Masters of Cinema series.

Extras include a new feature-length audio commentary with critics Glenn Kenny and Farran Smith Nehme and a full colour booklet featuring an essay on the film and rare archival imagery.

For more on this Eureka Masters of Cinema release, click here.