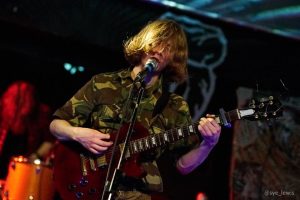 Liverpool doom-psych outfit Wild Fruit Art Collective capture the intensity of their live performance on their new single Under The Hooves.

The band fill the venue they play with all encompassing sound. It is an immersive experience. Sometimes it is hard to re-create the excitement when a band are a stunning live act, but Under The Hooves pulls it off effortlessly. The beautiful vocals have a mystic quality, verging at times on a chant. Backed up by some frantic guitars, the whole track has a sombre quality. The quasi-religious feel of the composition and the different tempos used throughout give the piece a hypnotic beauty. It is typical of the moody ambience Wild Fruit Art Collective create with their music. 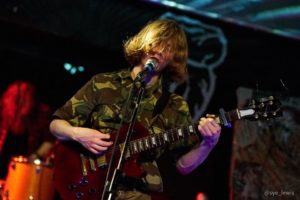 With a London gig to celebrate the release at The Five Bells on March 18, the band are joined by some of South East London’s finest. There are around eight bands on the line-up including Madonnatron, Texas Bob Juarez and Za Za Sapien of Meatraffle. Arranged by Patrick Lyons, The Neutral Zone, as the event is called, looks set to be a fitting celebration. Get your crazy doom-pop vibe going and head down for a night of fine, fine music. 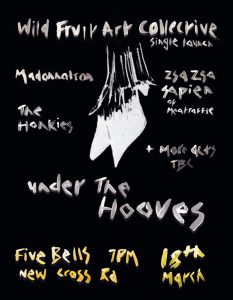 Details of the launch gig can be found here