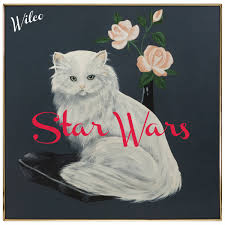 The Chicago based quintet release a surprise album that lives up to their legacy. Louder Than War’s Craig Chaligne reviews

The release of Wilco’s ninth studio album last Friday came as a real surprise to the music community. After the lengthy touring that followed the release of “The Whole Love”, the band had dispersed getting busy with their usual side project activities. Jeff Tweedy recorded a duo LP with his Spencer – Sukirae – and embarked on a lenghty tour to promote it. On the Wilco front, the release of the “Alpha Mike Foxtrot” boxset and the compilation “What’s Your 20?” coupled to a 20th anniversary tour of the US gave the impression that the band was in a “spring cleaning” mood and that we would probably have to wait till 2016 for new material…

Wilco now operate their own record label called Dpm records and it probably played no small part in the lack of leaks on the album’s release. The new record is currently available as a free download for another month on Wilco’s website and will be released on CD on 21 August.

Is the new album are as good as its predecessors ? I would say it doesn’t pale in comparison to “The Whole Love”, the production is maybe a bit more basic but it is a very consistent record. The thing it doesn’t possess, though, is a “whoah” song; there’s no “Impossible Germany” or “Jesus Etc..” which isn’t a bad or a good thing, just a statement.

Opener “EKG” sounds like the band is practicing to turn into King Crimson, an instrumental as far removed from the gentle songs of “Wilco (the album)” as you could possibly be. As always with Wilco there’s always a feeling of the record lacking the immediacy of the previous one when you first hear it but after repeated listenings the hooks start to make their way into your subconscious and never leave. Whether its the syncopated rhythm of “Random Name Generator” and “Pickled Ginger” or the more traditionally melodic tunes like “Taste The Ceiling” or “Where Do I Begin”, Tweedy’s songwriting hits the mark and the band arrangements are well balanced between classic rock and avant garde. Nels Cline channels Tom Verlaine at his best on “Cold Slope”. The record “piece de resistance” is the fabulous “You Satellite”, a song that could be seen as a hybrid between “Born Alone” and the coda of “Handshake Drugs”.

“Star Wars” is a solid effort from a band sure of its craft and willing to take chances.