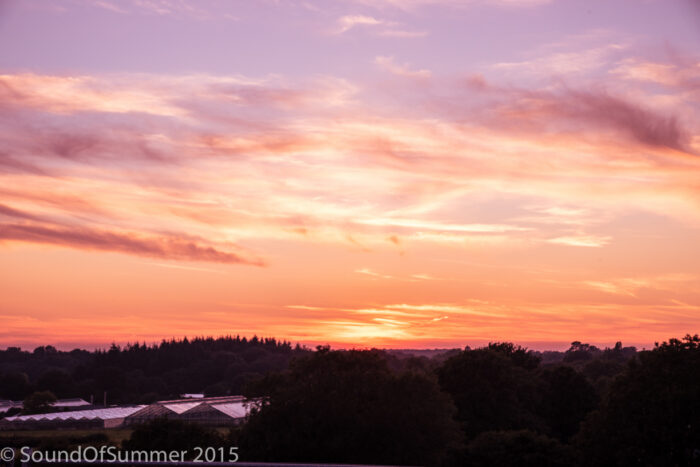 Wickham Festival has been around in various guises since 2003 and has been settled at it’s current site on the edge of the picturesque village since 2010.  Louder Than War’s Alan Ewart went along to check it out.

Wickham festival is fairly local for me.  Less than an hours drive along the M27 from Dorset and just a couple of miles from the motorway Wickham Festival has been on my “to do” list for years but for one reason or another I have been unable to make it until this year.  I set off for the short drive Thursday lunchtime and just over an hour later I was on site and already set up.  I don’t know whether it is down to my arrival times but I have been able to get on to every festival site in a breeze this year.  I don’t recall having to queue once.

I was impressed with the line-up that Wickham Festival managed to put on at very reasonable cost.  With headline performances from Wilko Johnson, Billy Bragg, The Proclaimers and 10cc at a festival with a capacity of around 5,000 a ticket price of just £150 for four days represents fantastic value for money.

Thursday’s line-up may have been headlined by the inimitable Wilko Johnson, but the undercard was one that many a larger festival would have been delighted to have put on.  The brilliant Sharon Shannon band, with Sharon playing squeeze box and whistles accompanied by guitar, keyboards and fiddle treated us to an hour of slips, jugs and reels.  Sharon and her band really do provide the very best of traditional Irish music.  The crowd loved it and were soon on their feet.

A good job too because Carlos Nunez was a real treat.  The Galecian multi instumentalist treated us to 60 minutes of celtic folk that even saw the inclusion of the Southern Jacobite pipe band during his set.  Carlos plays a variety of pipes and whistles to the support of fiddle, drums and guitar.  His music is celtic folk with an infusion of latin rhythms and it brought a little slice of northern Spain to southern Hampshire.  It was incredible stuff and a real treat though I suspect that this is music best experienced live.

Andy Fairweather-Low and his band played a stunning set, his take on British blues guitar combined with his instantly recognisable vocals never grows old.  Andy was on top form as he took the audience on a journey through a top quality set that included hits like Wide-eyed and Legless, Bend Me, Shape me and If Paradise is half as nice interspersed with music from his latest album.  Of course it was all leading up to the days main event, the inimitable Wilko Johnson. 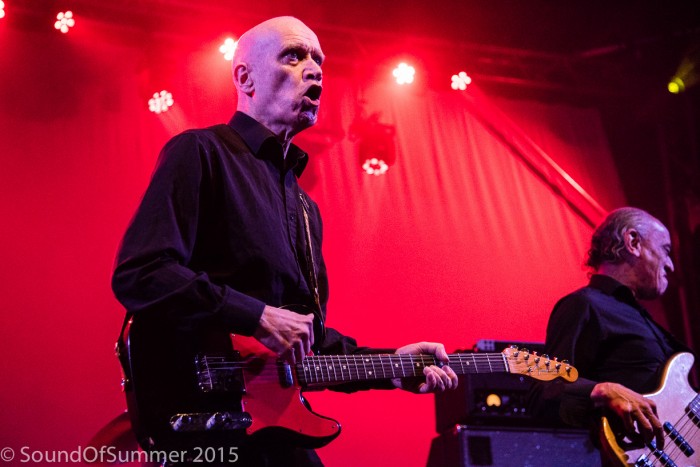 Wilko is always a treat and his performance started out at a high pace.  Unfortunately it soon became clear that Wilko wasn’t feeling too well.  He seemed to be hit by a number of dizzy spells and after about 40-minutes he had to be helped off the stage.  Fortunately it seems that it wasn’t anything too serious.

For me at least Friday at Wickham Festival sported the strongest line-up of the weekend.  Huw Williams and Maartin Allcock put on a highly entertaining show before socialist Icon Roy Bailey played his set.  It was a little odd to see Roy playing without his longtime friend and collaborator Tony Benn but nonetheless Roy was in epic form.  Now in his 80th year Roy’s passion for socialist politics is undimmed, he still has the fire in his belly and he clearly provided inspiration for Billy Bragg who played the best set I have ever seen from him at the end of the evening.

Sandwiched between Bailey and Bragg we had the [Beautiful] South with their usual run through of sing along, clever and witty pop tunes.  They went down really well with the large crowd and they seemed to enjoy the set as much as the crowd did.  I do find it rather bizarre to see two versions of the band touring with essentially the same set of tunes though

Show of Hands never disappoint and to be truthful I never tire of seeing them.  I saw them twice at the Larmer Tree just a few weeks ago and their set here was different again.  It was wonderful to see and hear the huge crowd sing-along to just about every song.  The fact that Show of Hands can vary their sets so much indicates the strength of their back catalogue but the crowd roared their approval when Steve Knightly announced that a new album was in the pipeline. 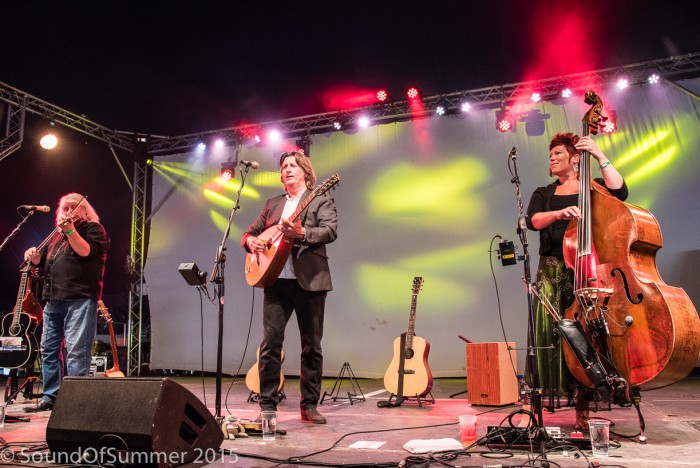 Saturdays line-up at Wickham Festival was again very strong but in truth a little too heavy on the pure traditional folk side of the lines for my personal comfort.  Whilst I appreciated the fantastic musicianship of Gavin Marwick and Kathryn Tickell the music wasn’t really my sort of thing so I went wandering just enjoying the sunshine and soaking up the atmosphere.  I returned to the mainstage to check out Eliza Carthy’s set.  Eliza now fronts the only band that has more members than Bellowhead, she has even pinched some of the members of that band including Jon Spiers!  Eliza delivered a fantastic set full of high energy folk music that had the entitre crowd on it’s feet.

Sadly for me Seth Lakeman’s set clashed with Phil Odgers and Bobby Valentino on the second stage, a set that I was determined not to miss.  I watched the first 15 minutes of Lakeman’s set and then caught the last 20 minutes or so after Swill had finished.  Lakeman probably drew the biggest crowd of the weekend and there were many hundreds of people outside the tent with their chairs and picnic blankets.

The Proclaimers finished off the day singing their anthemic pop songs to a crowd who were very keen to sing  with them.  500 Miles, the finale, could probably have been heard back in Leith as the crowd raised the roof to close a barnstorming set and to close the day.

Early Sunday afternoon saw Tankus The Henge take to the main stage.  For me at least they were the highlight of the entire weekend.  The energy that this lot burn is surely sufficient to run a large city for a month.  I just loved their take on ragtime infused Rock ‘N’ Roll served with a side helping of Balkan Rhythms and a dash of ska.  We were treated to a pianist leaping about 20 feet in the air from the top of his piano, smoke belching from the piano, a wailing brass section.  So good were this band that they made Moulettes who followed them seem positively pedestrian by comparison. 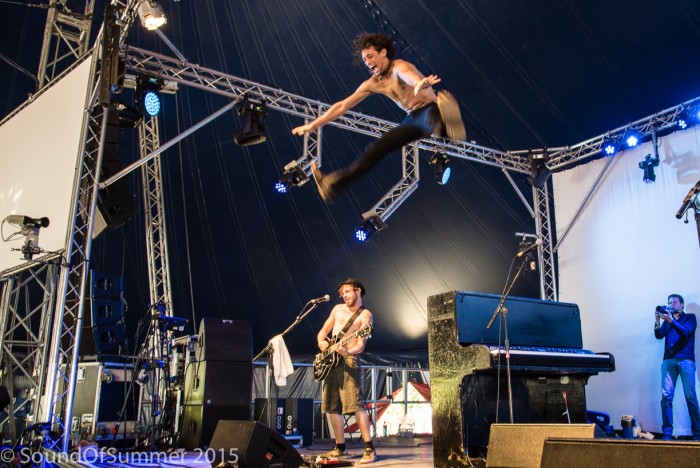 The Tom Robinson Band and Steve Harley & Cockney rebel lifted things up again for me during Sunday evening.  Robinson has recently released his first album in 20 years and the self confessed tour hater is back on the road in support of it.  Steve Harley did what he does best delivering a set full of sing-a-long crowd pleasers.  With just 10CC left on the line-up I decided to beat the crowds and left early.  I couldn’t abide 10CC back in the 1970’s and having seen them at a couple of festivals in recent years they did nothing to change my opinion.  The prospect of getting home for night in my own bed was a much more alluring prospect for me.

Overall Wickham Festival provided a fantastic weekend of entertainment for the price they charge.  Four days entertainment across three stages for £150 represents pretty good value for money in todays market.  The weather helped as it was absolutely stunning all weekend.  There was a good range of food available and there were lots of opportunities to grab a beer.  The bars at Wickham Festival had a fantastic range of real ales and ciders.  I thought the food was at the more expensive end of festival food offerings with a meal around the £8 mark.  Beer and cider at £4 a pint falls smack in the middle of the range of prices I have paid over the course of this summer.

The site at Wickham Festival did feel a little crowded at times, especially on Saturday evening, but I think that has more to do with the numbers of people who spread themselves out with their chairs and picnic blankets without having a thought for anyone else.  This is an increasingly common phenomena at festivals these days.  There is nothing wrong with people sitting of course, it’s just that some people need to have a little more thought and consideration for others.

Overall Wickham Festival is a great little festival, perhaps more suited to those who prefer their music more at the folk end of the spectrum.  It is certainly well worth a visit.