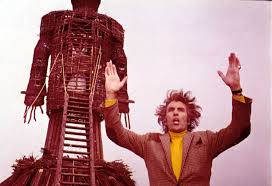 The Wicker Man is arguably one of the greatest pop culture films ever made – a heady mix of the pagan undercurrent to merry old England with a weird swirl of the swinging sixties somehow flavouring it – genuinely unnerving and with a unique and brilliant atmosphere and that stunning ending.

The Film’s director Robin Hardy has died at the age of 86, a family friend has confirmed.

The 1973 film told the story of police sergeant Howie, played by Woodward, who was sent to search for a missing girl on the fictional island of Summerisle.

Hardy, who went on to make follow-up The Wicker Tree in 2011, died on Friday, the friend said.

Last year, Hardy said he wanted to make a third version of the the film as a tribute to Sir Christopher.

The Wicker Man was Hardy’s feature film debut, and he went on to direct only two more feature-length films.