When the Beatles finally split in 1970 it was the end of an era. 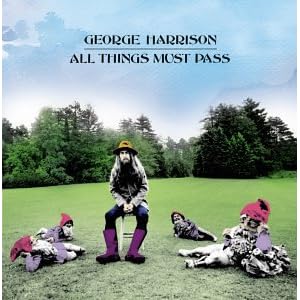 What had been fresh faced and thrilling was now long haired and beardy. The band who had grown up with their generation somehow instinctively knew when to quit. One more Beatles album would have been to many and they left with a perfect track record, even with Let It Be floating around awkwardly in the canyon.

On the solo front it looked like John Lennon and Paul MaCartney would be the obvious front runners, afterall they had been the main song writers in the band but their initial solo careers were varying. John Lennon’s brilliant, searing Plastic Ono Band where he ripped open his soul looked like he had reclaimed his rock n roll heart but it wasn’t long before his premature middle age kicked in, McCartney took time to find himself, looking like a man shocked to actually be on his own, unsurprising for someone once described as the Beatles biggest fan.

Meanwhile George Harrison who was not even anywhere near thirty and looked like to have had his best days behind him pulled out a triple album of songs out of the bag that had been stockpiled in the later years of the Beatles, a pile of songs that collected together have become the best solo Beatles work.

Full of spirituality and yearning, the collection, produced by Phil Spector has an atmosphere all of its own. This is as ebullient and soul searching as pop music gets, it also sounds quite different from the Beatles, just try placing any of these songs on a Beatles album in your head and you can’t, they sonically feel so different.

From the ebullient Wah Wah to the god is in the house of All Things Must Pass- the song that somehow seems to bury the Beatles and the sixties whilst oozing spirituality and musing on the flimsiness of life the album has so many diverse and different moods it’s difficult to sum up. The Ballad Of frankie Crisp has a beautiful, mystical feel to it and Apple Scruffs is a brisk touching song about the Beatle fans that would hang around Apple all day long waiting for the idols to appear. My Sweet Lord somehow makes the search for god into a perfect pop song whilst What Is Life is quicksilver genius. The songs have brilliant melodies and the playing but the band of star mates is looser and more ragged than the Beatles, freed from the disciplines of the band George lets his imagination run riot and the album even has the best Beatles solo sleeve of George surrounded by garden gnomes in his endless garden.

Even the superstar jams at the end of the album are not awful if you sort of think of them as add ons to a genius double album. George himself would never reach these heights agin, the album was the best selling album of 1971 and seemed set to make him the equal of his two former Beatle colleagues. Somehow he lost confidence with occaisonal returns to form, this album was his moment, the culmination of five years of waiting, sitting on a treasure trove of wonderful songs that had far more depth and wisdom than they should have. It was the first post sixties album and the harbinger to a new decade.


John Lennon once said that people should not moan about there not being a new Beatles album and just take tracks from the band members first four solo albums and make up their own new Beatles album, that would have been criminal to George who was really on fire at this time.