Home Music Bands Who will support The Stone Roses? 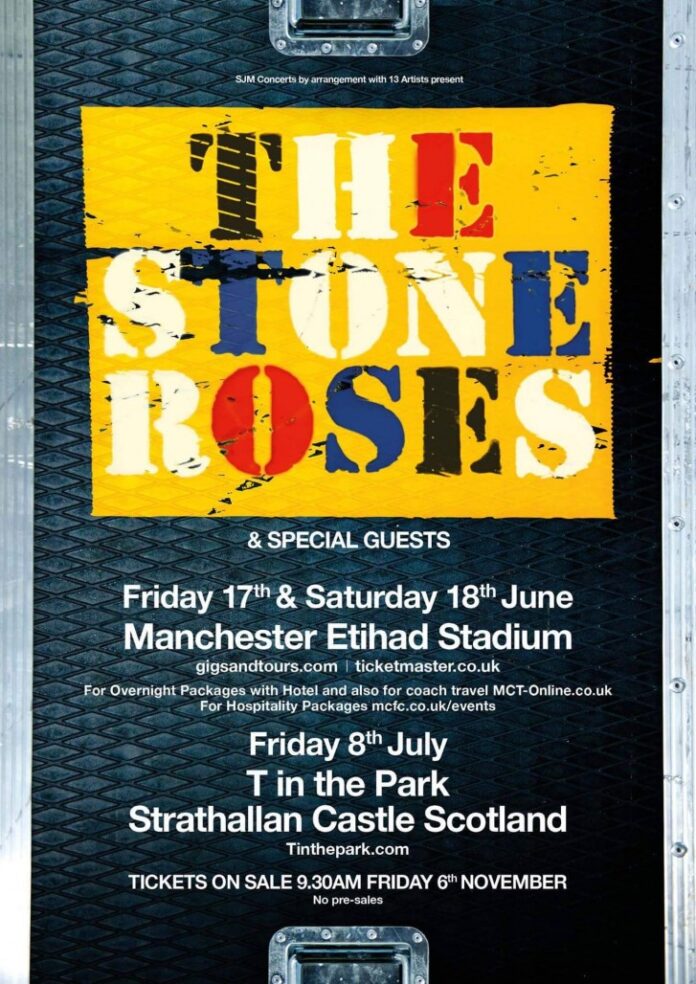 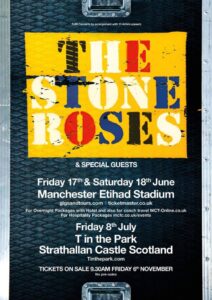 The Stone Roses have announced a return to the live scene with 4 dates at Manchester’s Etihad next June as well as a headline slot at T in the Park.

The question everyone is asking is will there be a new album or will these dates see the band revisit their classic material once more? With the rumour mill in overdrive ahead of tonight’s announcement we bet we won’t get a definite answer on that immediately but will be kept guessing a little longer.

And while we’re speculating on new material we’re also thinking about who will join the Roses as support on their Manchester dates?

Their 2012 comeback tour had them bring a selection of supports across Europe and to their homecoming gigs at Heaton Park including The Justice Band, Primal Scream, The Vaccines, Plan B, The Wailers and Beady Eye.

Playing Finsbury Park in 2013 the band again had a great selection of support for their headline dates – PiL, Rudimental, Dizzee Rascal, Johnny Marr and Miles Kane.

We’re expecting an equally eclectic mix of bands to be announced for the 2016 shows – although we might have to wait until early next year for confirmation of who will play.

It’s all speculation but with so much about The Stone Roses surrounded by secrecy we can’t help ourselves – we’re already thinking about who will share the stage at Etihad with them next summer.

There’s bound to be some artists of legendary status joining the bill – could we see the likes of Noel Gallagher or The Charlatans take to the stage – that seems too obvious really. Or Manchester favourite Liam Fray who was one of the first to tweet about the comeback play with his band The Courteeners again, after playing a London date with the Roses in 2013.

Hopefully there’ll be room for some newer or breakthrough acts too – Blossoms – they would have to be a really good bet, LIINES and PINS could all work – or a maybe a band with a massive fan base but constantly slipping to the left of the mainstream, Reverend and the Makers.

And once again we hope that the Roses will choose from supports across genres again – it would be great to see Kate Tempest or Grimes supporting. Or maybe a curveball like Public Enemy on the bill?

With the Roses it’s about expecting the unexpected – last time each memebr got to make a shortlist- could it be Evil Blizzard or the membranes or will Ian get Cockney Rejects on the bill or Mani plump for Slaughter And The Dogs…will there be space for Sleaford Mods (we would put money on that one), could Public Enemy get a look in?

There’s a long way to go between now and next summer and as The Stone Roses love to surprise us all we expect the supports for these dates will be just another thing to keep us guessing along the way.

Who do you think will join The Stone Roses at Etihad in Manchester next June? Leave us a comment below or join the discussion on Facebook or Twitter.