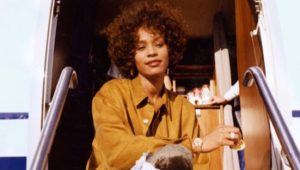 At Home, Manchester and on general release now.

Macdonald’s latest documentary is an investigation into the life of singer Whitney Houston, charting the musical heritage of her immediate and wider family, her childhood, her pop stardom throughout her twenties, her impact on race relations through her starring role in The Bodyguard and her performance of The Star Spangled Banner at the Super Bowl, culminating in her tragic demise through drug abuse in her 40s.  The film adjusts its focus, with Macdonald’s narrative quest responding to the revelations of friends and family members, constituents of Whitney’s extensive entourage throughout her decades of fame, revealing a highly conflicted sexuality, suggestions of child abuse and multiple personas, deep in the mix of pop megastardom.

“America is working” says an avuncular Ronald Reagan.  It has already been some years since wages rose in the USA in real terms but the mid 80s sees the American model of cultural and capital imperialism soar to its zenith, through the eyes and ears of the world’s public desperate for the glitz, the glamour and the colour it believed it deserved, providing the palette was of a particular hue.  Through the eyes and ears of the world’s public and into the coffers, the nose and the mouth of the Whitney machine, an assemblage constructed through glimpses of a future, through grim disciplinarianism, through dedication, devotion and a love with sick, twisted roots digging deep below the surface.  Better yourself/don’t better yourself.  Middle class/working class.  White/Black.  Whitney Elizabeth Houston’s existence burrows deep through a series of unending dichotomies, branching out this way or that, eking out a course through the sedimentary layers of fin de siecle consumerism while above the surface the flower faces bloom and the leaves spread, bristling in the breeze.

No one refers to Whitney as Whitney.  Whitney is ‘Nippy’.  Nippy doesn’t ever sleep in a bed.  She slumbers on the sofa, ensconced in a hoodie, in the glare of the TV, her chin resting on her hand, her elbow on the window ledge as she pouts from her hotel room.  “America is working”.  Nippy has nothing to say.  Where’s Whitney? Cissy, Nippy’s mother, loves Nippy in a way that enacts the American Dream in a way that is unlike a dream and in a way that is more like a living nightmare of impossible endurance that can never end and to which resistance is futile.  Nippy loves Cissy.  American bombs drop on El Salvador, Nicaragua, Iran, Lebanon and Libya. Grenada and Panama are invaded by US troops.  Cissy loves Nippy.  Nippy breathes.  Nippy half sleeps, half wakes.  Nippy, in the glare of the TV.  “America is working”.

Amongst the bullets in Newark 1967?  As you clamber over the bodies of your brothers in Newark?  As you escape (your past? Your present? Your future?)?  As you see how the cogs turn, see the workings of the machine first hand and see some glimpse of daylight you know you have to run.

Whitney Elizabeth Houston died in conflict, on the battlefield, in the ghetto, on American soil, at an early age.  Despite the persistence and increasing eminence of the phenomenon known as ‘Whitney’ in the public realm for several decades afterwards, and the woozy, soporific apparition of ‘Nippy’ recorded on numerous occasions in home movie footage by the Whitney machine, their testimony reveals the scene of the crime corpse outline, the thick white lines of her hollow profile, demarcating the space where Whitney Elizabeth Houston once existed.  Extensive notes from pathology indicate the space within the white lines to be heavily contaminated by a confluence of highly concentrated forces, typical to late US capitalism in extremis.

Vultures hunch on the periphery, their bloody beaks dipping like darts in and out of the space within the white lines.

Watch the trailer for Whitney here: