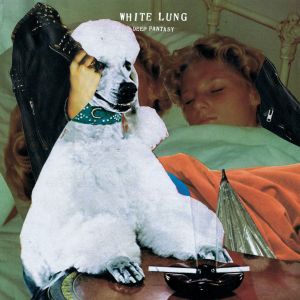 Canadian thrashers White Lung’s third album is another frantic, politically charged maelstrom that offers a more ambitious sheen and clear-cut vision than ever before.

No, it’s not the latest willfully cheesy soft core skin flick; it’s the third album from Vancouver via LA D.I.Y. punkers White Lung, and their first for influential indie imprint Domino Records. Lyrically, the songs on Deep Fantasy unabashedly embody White Lung’s heavy feminist ethos, tackling touchy subjects like rape, sexual power play and body dysmorphia. I feel this is important, because in an increasingly backwards world where women’s health is disturbingly under threat from political interference and extremist billionaires are waging war on women’s rights in general, we urgently need an outspoken band like White Lung willing to have a public discussion about feminist values.

Born screamer Mish Way, White Lung’s feisty frontwoman, is to the noughties what Courtney Love and L7 were for the nineties, and indeed what Poly Styrene, Siouxsie Sioux, and The Slits were for the seventies; a confident, iconic and thrillingly empowering female presence in a still mostly male dominated realm of small-minded stereotypes and gendered expectations. Even as modernized education should mean equality, freedom and humanism are more widely embraced, most women continue to commonly experience the frustration of feeling marginalized as human beings because of what’s between our legs, and I for one, am proud to have strong and assertive voices in my corner like Mish Way’s (and Hether Fortune‘s, White Lung’s newly recruited bassist). All this being said, Deep Fantasy is not an alienating, Valerie Solanas style anti-male diatribe gracelessly widening the gender divide. It is feminism for everybody with a brain and a conscience, regardless of what happens to be in your pants. For me growing up, punk was always about personal liberation and acceptance of our differences. Bullying, sexism, and all the rest of it were crimes perpetrated by stupid, insipidly ordinary people with no imaginations. It makes sense then, for Mish Way’s feminist messages to be filtered through the explosive, adrenaline-packed and relentlessly paced melodic punk of Deep Fantasy. In-your-face album opener Drown With the Monster, with Anne-Marie Vassiliou’s pounding double-time drum crush and Kenneth William’s winding cobra choke of high velocity guitar squeals, is like something Steve Albini might have recorded.

Although their politics remain unchanged and their instinctive ferocity is unbroken, by the second track Down It Goes, you can tell White Lung’s sound on Deep Fantasy is more controlled and precisely channeled than on their previous albums. Mish Way’s piercing vocals cut through the bludgeoningly brutal instrumentation with their usual theatrical intensity, but there is more direction and thoughtfulness behind her emotionally charged howls. Another one of Deep Fantasy’s main highlights is the artful way William piles on passages of anxious, dissonant guitar screech. At times, his unique and commanding tone reminds me of The Wipers, but only if you were to put Youth of America through an industrial high speed blender…

It is refreshing to note that White Lung’s angst is never self-indulgent or without purpose. I Believe You is so fast and full of snarling fury it almost feels like an extended shock from an electrical socket, but despite the inevitable anguish of its subject (sexual assault), it is also empathetic and hopeful. Wrong Star again exemplifies the authoritative guitar gifts of Kenneth William with its spine-tingling high treble harmonics and emotive hammer-on riffing, while Mish Way’s singing is wonderfully manic, heated and heartfelt. Absolutely nothing is wasted here; the sharp and abrasive twenty seven minutes of Deep Fantasy are a whiplash inducing antidote to complacency, both musically and politically. I just hope enough people are really listening.