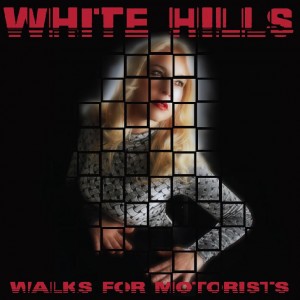 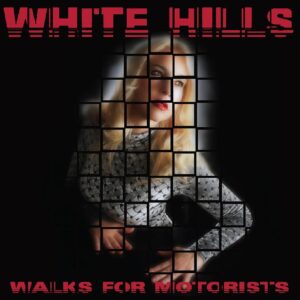 Dave W and Ego continue their quite incredible output of (at least) one album per year with Walks For Motorists. What is even more incredible is the quality of each release which improves album to album.

Walks For Motorists is probably their finest album yet. Making the not-so-short journey from America to Wales to record their first album outside of New York they launch straight into first single No Will with the duo’s now characteristic Cramps rock guitar and throbbing bass synth lines. Their style is unique and powerful.

White Hills are unique as they intentionally don’t fit neatly into a genre. Their albums feature dirty rock, grunge, electronica and a bit of prog psychedelia thrown in for good measure with equal mixes of dark haunting humour and a splash of experimentalism. Whether it be the curiously entitled £SD Or USB or the near hip-hop beat of Wanderlust, White Hills never fail to disappoint.

Lead The Way has a near Metal Guru riff as it slowly slips and slides in a dystopian jumble of lazy drums and carefree guitar meanderings for nigh on nine minutes, and I Nomad represents an instrumental along the lines of OMD meets Kraftwerk. Certainly the duo aren’t afraid of mixing sounds and styles which maybe shouldn’t work but always do.

The involvement of David Wrench who helped record the album has added a sometimes softer, stripped-down sound as his experience in the field of electronic music produces a more clinical end result. We Are What You Are goes totally overboard with pretentious guitar solos and sound fabulous for it.

Automated City trundles along with a continuous bassline which grips the minimalist track by the proverbial throat, and Life Is Upon You has hints of Bowie’s Heroes. That said, it’s important to say how original White Hills are, and will surely soon be emulated by many bands over.

The album closer and title track has further musical nods, this time in the direction of Depeche Mode’s Walking In My Shoes, contains few lyrics in favour of sound bytes and clips over its near seven minutes as one the White Hills’ best albums draws to a close.

~
The White Hills tumblr site is here: whitehillsmusic.tumblr.com. They can be followed on Twitter as @WhiteHillsMusic and liked on Facebook.