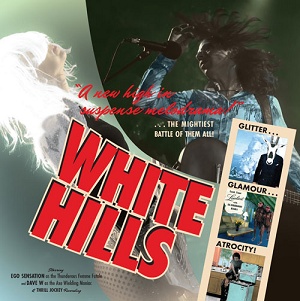 I probably shouldn’t like White Hills. It defies all logic. They combine elements of metal with prig and psychedelia into a mish mash of distorted heavy beats with madness and unpredictability. I love them.

Originally released in 2007 as a cd only, Glitter Glamour Atrocity was recorded at the same sessions that spawned Heads On Fire and Abstractions & Mutations. It bore a sound which they have made bastardised in their own unique way and made a noise that is purely White Hills.

Twelve months after the release of their typically unconventional So You Are album, this re-release sits perfectly in the natural evolvement of White Hills and shows that they were in fact way in front of their time seven years ago with an album that sounds a lively and as fresh now as it would have done back then.

Opener, Air Waves the thirty-eight second spoken word echoing prelude sets the scene perfectly for their take on the post 9/11 World of war, misinformation and political untruths. Wonderful excerpts of George Bush seemingly admitting his shortcomings are placed perfectly into the amazing soundscapes of pure power and serene silence.

Under Skin Or By Name is a nine minute epic of pounding drums and cutting guitars. Sitting somewhere between Black Sabbath and The Doors, the vocals of Ego Sensation are uncomplicated but perfectly suited as synthesizers swirl and spin around in the fore.

The combination of neo-metal and futuristic keyboard sounds may not be original but White Hills absolutely nail it. If ever there was a musical influence in the making then here it is. Starting with sea ebbs and gulls, Spirit Of Exile the current single is hypnotic and against the grain.

The integration of hard, rough sounds and gentler almost ambient, drone is a formulas that really shouldn’t mix but somehow White Hills pull it off. The minimalist instrumental Distance shouldn’t sit as comfortably as it does and maybe that’s the strength of the group. Feel the fear and do it anyway.

The beautiful guitars of Somewhere Along The Way shoulder to shoulder with the screaming sounds of Long Serve Remember and its almost robotic vocals. Bush appears telling us how he was threat to the USA and how he wouldn’t trust himself if he was someone else. No shit.

As the title track ends the album in its near fourteen minute brilliance of good old rock ‘n’ roll, remember that White Hills were doing this sort of thing before all those inevitable imitators came along. If, like me you missed Glitter Glamour Atrocity the first time around, here’s your chance again to listen to an absolute gem.