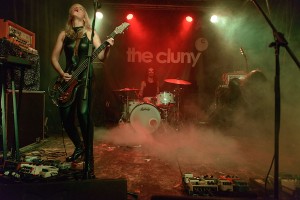 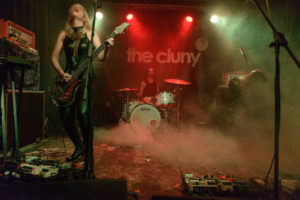 The awesome White Hills roll into town and head up a trio of power trios, completely taking us by surprise and leaving us washed up and questioning whether or not that really just happened.

White Hills are one of best psychedelic rock bands around, so it’s no wonder that we’re eager to get down to tonight’s show. A feast of the finest psych rock trios this earth hath to offer, kicking off the evening are Cave Suns – our first time experiencing their wares. They lack the force of the other two, but what they have is more than ample. They’re definitely a band to watch out for in the not too distant future.

However, Blown Out have an immensely heavy arsenal, a stacked bass section with Jonny Hedley on bass and Matt Baty on drums, both of whom are from Khunnt and Pigs Pigs Pigs Pigs Pigs Pigs Pigs. On guitar duties is Mike Vest of Bong, Haikai No Ku and Drunk in Hell so with this level of expertise expectations are huge.

Blown Out take the roof off The Cluny and we’re left completely aghast at the sheer velocity of this monster trio. Their level of unadulterated power would intimidate many lesser bands, but I firmly believe it inspires White Hills that bit more as Ego Sensation congratulates the Blown Out guys after their set.

As time ticks on, the smoke bellows out and a fired up Dave W and Ego Sensation eventually take to the stage. Not deterred in the slightest by the carnage that has taken place in here less than half an hour before, they set about tearing every bit of this place down. Opening up with No Game, their intentions are clear and what follows is a psychedelic onslaught of the highest order.

The guitars swirl as the volume increases, the atmosphere intensifies and the smoke thickens as The Condition Of Nothing rings out as the band hit their stride. White Hills have put to bed any doubts straight away and we take a step away to admire the sheer brilliance of the band before us. The incessant guitar solos are packed with intricacy as Dave W pounces around the stage.

The power is relentless, a complete aural assault with the fuzz of guitars and motorik rhythms. Forever In Space (Enlightened) is a perfect example of this, a truly face-melting track filled with an astonishing amount of power and an extortionate amount of fuzz. A true highlight of this evening, as the track comes to a crashing crescendo we’re salivating as the band continues to tear apart The Cluny.

In Your Room closes out the set in a truly heavy fashion and the band seem humbled by the reception of the crowd as they assault our ears for a final time. To believe I had doubts about White Hills’ capabilities seems completely absurd as we exit the venue. Blown Out were phenomenal but White Hills elevated everything to a completely new level.

Cave Suns can be found here, they’re also on Facebook.

Blown Out can be found here, they’re also on Facebook.

All words and photos by Lee Hammond. You can check out more work by Lee by visiting his Louder Than War archive.