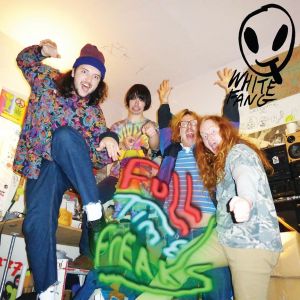 A few short-sighted reviews I’ve read for this album have become essays riddled with preconceptions dissecting White Fang’s motives and how they fall short of punk’s cultural ideals. They’ve been criticized for being lazy, indifferent and indulgent, and while these things may be somewhat true, White Fang is not a band to put under the microscope.

They are Full Time Freaks because they don’t need a place in anyone’s bullshit adolescent clique of school lunch table wars. Their actions are as in-your-face as the spiral rainbow drip of their tie dye t-shirts, and just like the slacker kitsch combo of their disheveled wardrobes, they’re not afraid to wear several different styles at once, even if the results are offensive to the eyes and ears of the more conservative masses. While Full Time Freaks is mainly grimy home-made punk buffoonery, there are surprisingly pretty pop ditties reminiscent of White Fang’s sister band The Memories, as well as some groggy psych and even a gently rippling countrified instrumental (Talkin’ To the Apple), which seems like it could have served as an intermission between the two sides of the LP.

The album emanates a boyish bluster of cockiness, roguishness and immaturity, with lyrics referencing their dicks, stepping in puke, and of course, The Fang’s favorite past time, blazing a bowl. White Fang is a misbehaving gang of misfits who have known eachother since their early days at school, and as such, everything they do is all friendship-based horseplay, and so their music never feels hard going, ill-natured or like they have any chips on their shoulders whatsoever. 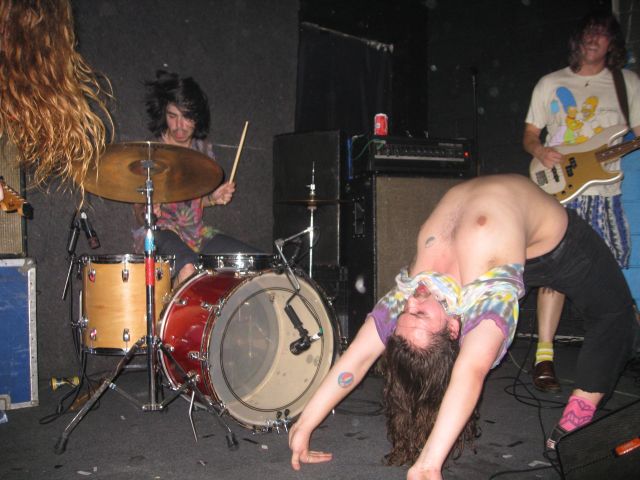 Sure, they are crass, vulgar, and clownishly bad-mannered, but even their angst feels somewhat tongue in cheek, as if they are having too much fun to be genuinely annoyed by anything. Shut Up is an almost comical list of threats backed by a crackling drum machine beat and a vintage 1980s keyboard throb that sounds like a venomous marauding snake in the grass at an unsuspecting picnic. Goodbye To Bedtime is a bratty, frenetic noise squall targeting squares and the boring futility cycle of the 9 – 5 work week, with frontman Rikky Gage shouting snottily into the maelstrom (“Oh SORRY, were we being TOO LOUD?”).

There are also plenty of positive affirmations for balance; the simple turbid riff, steady drum thump and sweet harmonies of motivational dream chaser Gonna Get It opens the album in a celebratory glory, while High On Life is a freewheeling and dumb feel-good jam about nothing in particular. Doin’ the Dam Thing is the White Fang and Gnar Tapes work ethic in action; despite being legendary partiers and chill masters, they are diligent hard workers who have built their own great underground empire of self-released cassette tapes, and never dawdle with sending out orders or recording more intriguing tunes.

These are songs to lose your shit to in the style of the piggybacking, somersaulting and beer slurping onstage antics of a White Fang live show, and also songs to relax to with a 40 at a backyard barbecue, laidback and friendly postcard-snap slices of life (Talkin’ To Gary On the Corner).

Before I Pass Out fittingly plays out like a bit of drunken, hippie-ish wisdom murmured by a best friend after a long night of alcohol binges and general fun-seeking depravity, and again confirms that White Fang have no grand plan or deep insidious schemes for creating music. In fact, it is their complete lack of concern for subtlety that makes the band. Whether or not they fit into some kind of genre agenda is a journalistic concern, and a very trivial one at that. My advice: just enjoy White Fang’s crude rough-hewn gems and join in the boisterous tomfoolery, get sick on really bad tequila and sing along while riding on the shoulders of a good friend.

White Fang is on Facebook and Twitter, and also have their very own snazzy website here.
Full Time Freaks is available on LP format (in a limited run of 1000 copies) and digitally via Metal Postcard Music on Bandcamp.

All words (and live photo) by Carrie Quartly, you can read more of her writing on the site here.