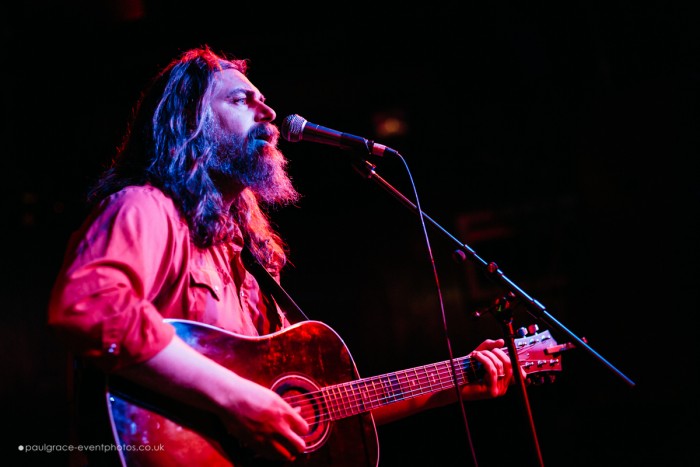 The White Buffalo only announced his Shoreditch date a few days prior, but the sell out audience and flawless musicianship suggest this could be a very big year for the Americana soul rocker.

With a career spanning 5 albums and several EPs, The White Buffalo (aka Jake Smith) has also had numerous songs included on the soundtrack to high profile American crime drama “Sons of Anarchy” (including the Emmy nominated track “Come Join the Murder”).

His most recent album, “Love & The Death of Damnation”, was released in August 2015 and received rave reviews.

Tonight the Oregon born singer/guitarist is playing a last minute gig at Shoreditch’s Cargo to coincide with a UK radio performance.

The show is billed as a solo acoustic performance (The White Buffalo also performs as a 3 piece band) and despite the late notice, the room is bursting as the house lights are dimmed. 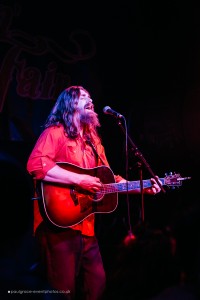 The crowd cheers and greets The White Buffalo like an old friend as he saunters onto stage and picks up his guitar. He responds with a beaming smile and takes a swig of beer.

His sound is a fascinating mix of intricate Americana guitar strumming, with a deeply expressive well-trodden gravel voice that suggests this man really has lived. He very much looks the part too with his long hair and beard – a modern day Grizzly Adams with a face that clearly holds a thousand tales.

The White Buffalo’s tracks are akin to short stories offering an interesting and compassionate insight to the troubled lives of misfits and acquaintances. These are heartfelt anecdotes which make us feel like we’re peering through a dusty cracked window, observing the complex patchwork landscape of life in small town America – his America.

The crowd remains focused throughout and hang on to Smith’s every word like an attentive child listening to their parents narrate a compelling bedtime story.

Moreover, his lyrics are delivered with such passion, drive and soul that he stirs a genuine connection with us all.

There’s a humorous moment when Smith announces that the physical CD of The White Buffalo’s first album is available at the merchandise stand, and that it hasn’t been available in the UK previously if anyone wants to buy it. “Oh yes it has”, someone in the audience shouts, to which Smith responds, “Yeah thanks mate – there goes my attempt at an exclusive sale tonight”. The room howls with laughter – Smith included. 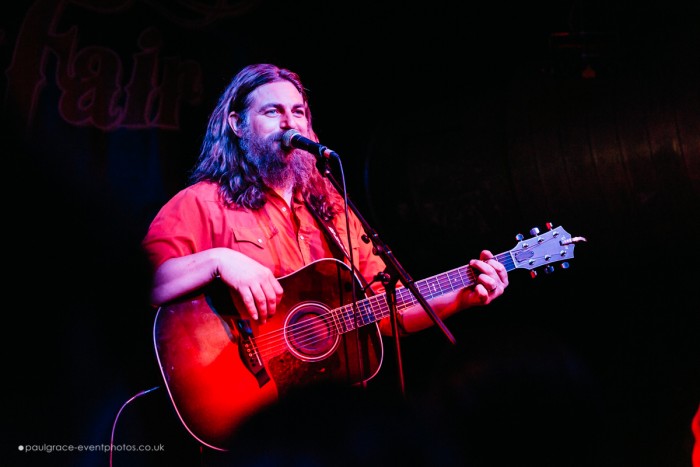 The White Buffalo is clearly a master of his craft and each song/tale carries its own bleak yet optimistic charm, with highlights including “I Got You”, “Joe and Jolene” and “Love Song #1”.

There’s frenzied dancing when Smith picks up the pace and respectful composure when he plays a slower ballad.

At the end of the hour long show the crowd enthusiastically demands an encore. When The White Buffalo returns to the stage we’re treated to 2 more songs before he finally leaves, promising us that he’ll be back with his band for more shows later this year.

It was an intense insight to the mind and life of The White Buffalo. Definitely a new fan here, and I’m genuinely looking forward to deconstructing his lyrics and learning more about the characters who have left their mark on this man’s life.

You can find The White Buffalo online here: thewhitebuffalo.com. He’s also on Facebook and twitter as @blancobuffalo. He returns to the UK in July to play Ramblin’ Man Fair.