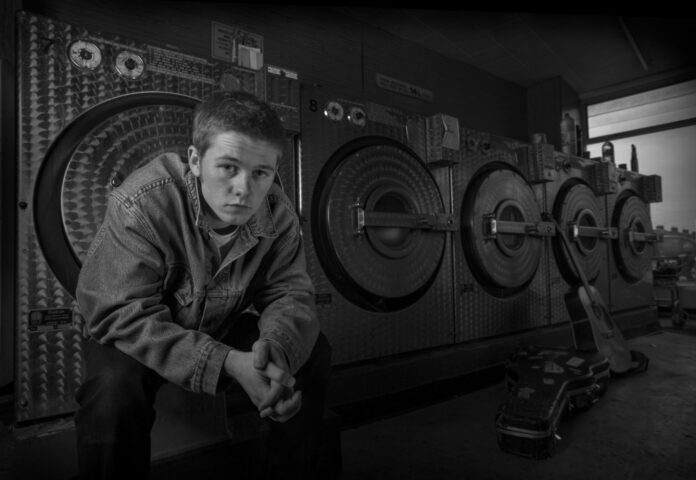 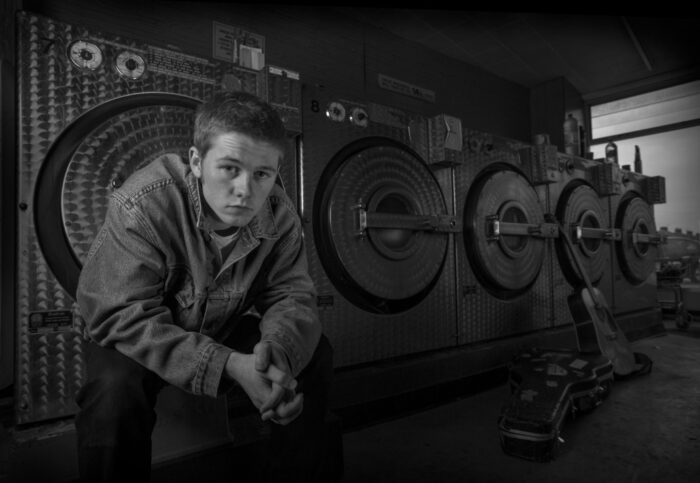 At times we seem caught in the rut of the music businesses undistinguished output: easily digested, easily disposable – product seemingly unwilling to declare opinion outside of the accord. So it’s only to be expected that we get a little fanatical when experiencing the electrifying intoxication of a band that play live with an attitude and rhythm akin to that volatile moment when fire ignites gunpowder. They have independently created one of the best albums of 2015 and their front-man is not only refreshingly honest but has a passionately questioning mind.

Appearing after a solid year of writing and rehearsing together in February with a devilishly catchy single and a sell-out first show White Boy were made up of (in part) from the disbanded Janis Graham Band; a group that had built itself a solid and loyal fan base as well as much hyperbole from the music press – so it was a bold decision for singer, song writer Joe Jones to bring things to an end. “It was the only one I could make. I was writing this album and this album had to be done in a different format under different circumstances. It wasn’t hard to make it – I didn’t feel like I was giving up an opportunity for stardom, fame or riches it was ‘okay I’m writing this now’ so it is what it is. I didn’t enjoy making the decision.”

Sitting across from Jones on a cool October afternoon in the midst of much activity – we are holed up in a fire damaged 1970’s launderette which today is playing host to White Boy’s video shoot for their third single from their debut album Glitoris – Bleach. The location being only somewhat emblematic of a song with many layers. “Bleach is about a specific culture: people’s tendency for things that aren’t too savoury so when I’m saying ‘reach for bleach – white spirit’ its talking about this thing called whiteness having a tendency towards the more disturbing elements of life and that’s a reflection on the album as a whole. Glitoris is talking about a specific decade and a certain group of people doing things I just can’t tolerate: the way they abused people, the way they used their power. Bleach is telling those people to have a bit of a cleanse.” As if on cue sporting a dressing gown, socks/shoes and a latex pig with wig mask guitarist Lowell Killen passes alongside the over-sized chrome washing machines heading for the back of the building where three years ago the fire stuck together the fixtures, general office detritus and left clothes as something akin to a blackened semi-melted lair.

So is Glitoris – I ask – a story of 70’s misdemeanour’s? “It’s not really a story – every song was written from that sort of perspective because I felt as though I’d been writing music that was not hitting really what I wanted to say .For a long time it was being very vague so I went for a specific idea and stuck to it and that was the 1970’s. Where you see something really in the western world that was at its peak: rock music and pop music some good stuff came out of it but when you dig under the surface, as it has all now come out, the basis of that was horrendous; So I’m sort of asking at what cost does this society create its best pieces of art?” We listen expecting of a hit of nostalgia but due to our knowledge all we get is nausea. “Yes. The thing that triggered my mind was the Jimmy Saville case and that this decade that I liked listening the music of was totally tarnished. As I write music I know what’s creating that is really important. So Gary Glitter’s making a good pop single and there’s all this carry on going on behind the scenes and you can’t take that away, it’s part of him and therefore part of the music and therefore its part of us listening to it.” The album doesn’t seem to only be reflective of the past though Bleach lyrically could certainly be a modern take on current times for example. “Bleach is the cross over point where I’m basically saying nothing’s changed, it’s only now we know what was going on then and we know what is going on now. “

It’s clear to see that Joe has a lot engaging his mind and as the film set populace carry lights, cameras and cables past us they one by one disappear into the charcoal-ed coated room behind us and we’re left with a muffled ebb and flow of indistinguishable chatter – Jones leans forward talking about people he feels inspired by (presently Joan of Arc and Nina Simone), reasons to dislike the internet and fears at the growth of the right wing: alighting from one hot topic to another.

When playing live Jones has a powerful vocal range: pained soul to passionate rawness – he takes intense care over the articulation the shaping of words and the spaces between them which carries (it seems) as much significance as the lyrics and as we talk the thoughtful pauses are here too and when he speaks he takes the sentences off into unexpected directions and conclusions. A man with serious thoughts: a magnitude of many concerns weighing heavily on his shoulders: “It does people’s heads in sometimes but I’m daft half the time as well and that does their head in too. I can switch off but I’m finding it harder as I get older.” I can’t correlate being a pessimist with being creative. “I am optimistic because I know that regardless in the end the good wins, truth comes out and justice prevails. But in the short term – politically – no I’ve got no optimism there … how could I?” Doesn’t being in a band give you the scope to implement change, to educate as well as to entertain? “I don’t know what the role of being a band is. I know the role of playing music and that’s a much more fundamental thing, I want to play music, I enjoy playing music, I like doing stuff like this.” He gestures with a smile to the flicking glow of light from the next room. “It’s good – creative – I like it. I needed to play music that is the important thing for me but to make political change in a band is going to be hard.…. Russell Brand is an example of that you get used and abused and you get pulled around so I know that’s not going to happen…. however, that’s not to say I’m not going to make political change at some point in my life. But obviously if you can make people have a little bit of a think.”

White Boy’s debut album – Glitoris certainly hands you enough opportunities to reflect packing an unexpected sparkle, despite the acute social commentary, the sometimes diagnostic intrusiveness and slightly caustic edge that runs throughout, certainly this is down to the vibrantly rich indie pop that’s rippled with flecks of ska and glam rock that despite revisiting past musical territory skilfully avoids the hazard of being comparable to anyone in particular by creating something very much its own character: somewhat moody, somewhat vehement – yet totally lush. “I had a clear idea (for the album) I’d been writing a year before we started recording I pretty much laid out markers where I knew things needed to be in terms of the sound and the lyrical content. I was quite deliberate.” Were there elements that you’d go back and change? “No I was really happy. I’d been with the songs for a while – we’d been playing the songs and rehearsing the songs for a good six months before recording it. We had a few were should we put on shouldn’t we but I’m sure we were right with the songs we put on it. I was surprisingly really happy with it because usually I am bad for pulling my own stuff apart.” How do the other members have an impact on the album? “The songs were written mostly by me by the time it got into a band situation but what the band added made them much better.” Do you have favourite track? “Yes Mama the production on it works all the lad’s solos were brilliant … the of it works. It is just how I imagined it being for the first time ever with a recording.”

As we’re talking while photographer Justin Garner corrects the additional lights, which are currently creating  bright twinkling stars as they bounce off the industrial silver machines, reflecting the movement of the people who are walking past the large window of the dormant business premises.  It brings to mind the stage lights at the band’s live shows: there is something very special about this groups performance – any one lucky enough to have seen them at their first two sell out shows at the start of the year would have found it beyond belief that these were their debut performances together the band. Do you enjoy the experience of playing live? “Yes I do enjoy it. It changes – sometimes I don’t – most times I do. I like being around people I like feeling people buzzing. I actually enjoy the act of it – it feels like it is something good for you. Some aspects of the lifestyle have been over-hyped in rock n roll. It’s not all fun and  you have to be very careful of some of the people but other than that the act of playing live is brilliant.” You said that your idea for Glitoris was very clear.

Has playing the same tracks live meant they have to some degree taken on a life of their own? “I think that always happens to an extent. What we did well with the album this time is we knew we were recording an album. In the past when I’ve recorded I thought I was just playing live on record and the stuff recorded didn’t really pull it off. We have an unavoidable energy on stage which can’t be restricted to how it would sound on a record so it was always going to be different. My vocals change live because I get too carried away, the (songs) become a little less controlled and that’s what’s missing from music nowadays.”

White Boy release their third single ‘Bleach’ as a digital download on 23rd November 2015 and plan a tour early in the new year. Their debut album Glitoris (Eastern State Music – CD/DL) is available now via the bands own web store or iTunes. The official White Boy website and Facebook page are great places to get the very latest information and White Boy also tweets as @x_white_boy_x.