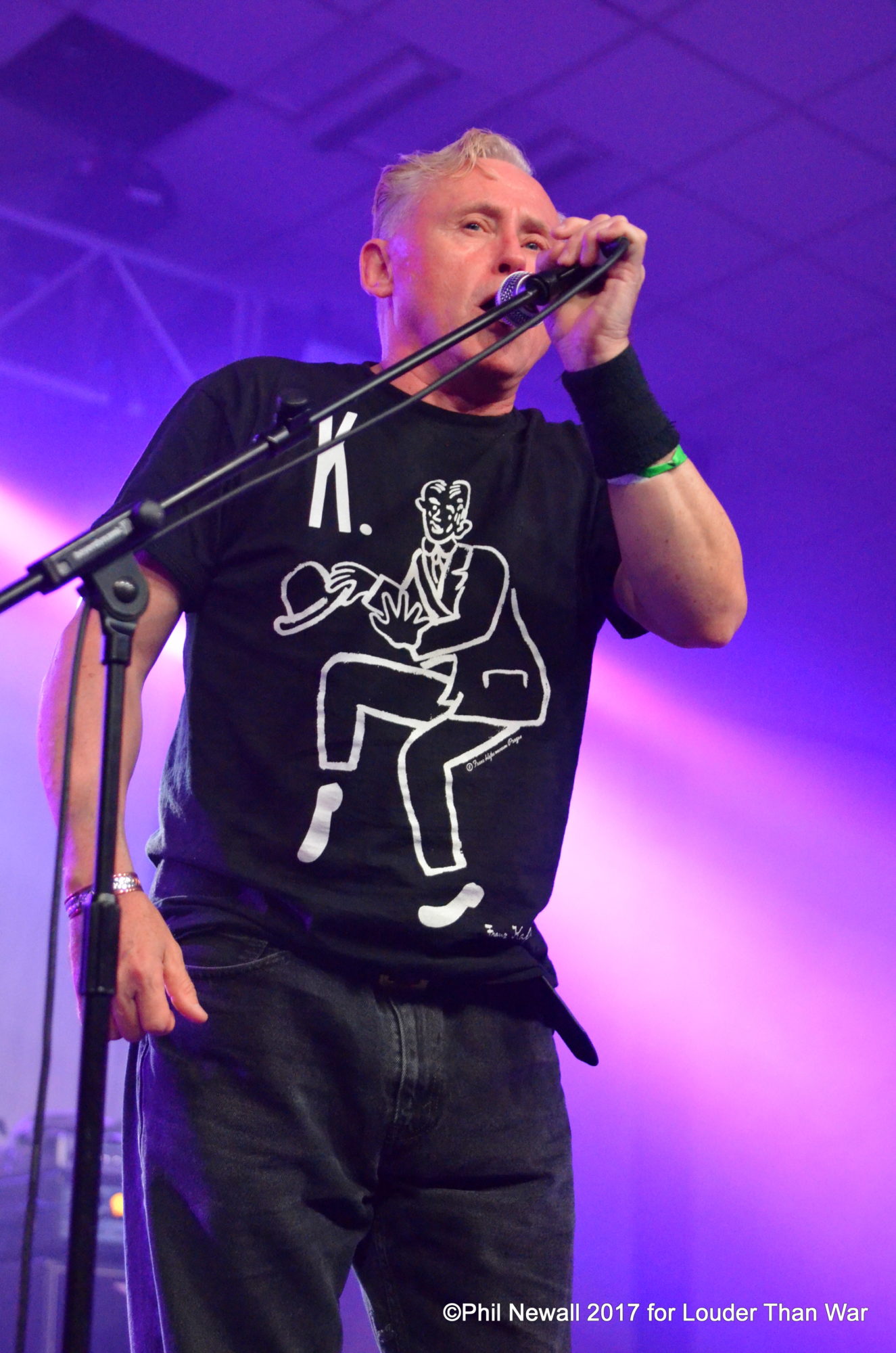 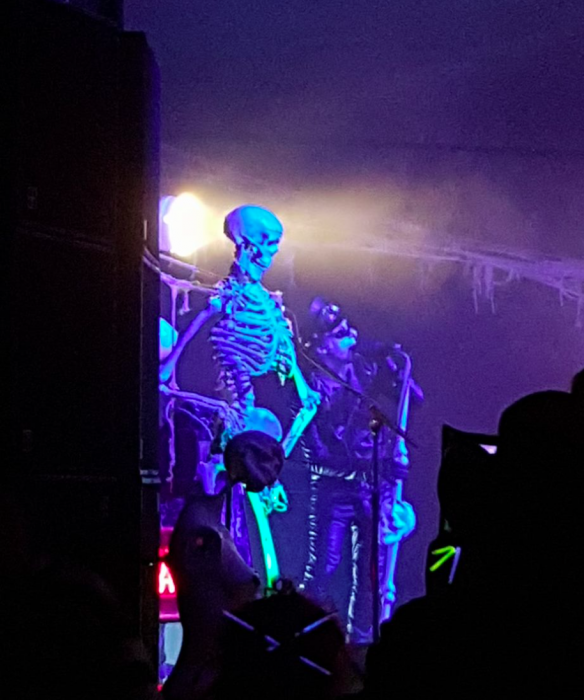 Dripping with drama and Victoriana you could not get a better town for a goth-tinged event than Whitby with its olde worlde cobbles and mysterious back alleys. It’s the perfect backdrop for those dressed to thrill kill as they walk its dark charmed streets. Like all great festivals WGW is a perfect microcosm of a culture and a reaffirmation of gothic vows and energy to return back glowing with a spectral darkness back to the so-called real world on the Monday.

In its 23rd year, Whitby Goth Weekend is the premier Goth festival in the UK reflecting the vibrancy in the culture with its broad church of bands and musical styles. Any beyond the fringe musical culture needs this vibrancy and the plethora of different musical and sartorial styles reflected at WGW from the steam punk contingent dressed in their sci-fi Victoriana to the punk goths to the electro Goths to the old school Goths to the corset-clad to the cross dressers to the fifties glamour  to the Wiccan witches to the vegan nature wood nymphs in rubber and laves to the rubber fetish crew and many more  is a perfect mirror to a cult that is still worldwide huge and also still very much in a creative first gear with the outfits more and more imaginative and outrageous every year.

With the endless fascinating themes of sex and death, this is also a party with the North Sea embracing the huge beach down the cliffs from the venue. Meanwhile the town itself becomes the perfect backdrop to a dressed up, dark parade of rubber fetish wear and outlandish and brilliant outfits of the half-dead as well as  rubber dresses made up of skeletons, there is blood and gore, Victoriania as well as steam punk in every sci fi 19th century style  – it’s the greatest catwalk I have ever seen. In every corner lurks a gang of day of the dead wardrobed mini ghouls or a back alley full of extras from a  Tim Burton movie – the greatest show on earth and the audience is the star.  There is also an annual football match at the ground of Whitby Town FC were a black kitted goth team takes on the locals and a sponsored bat and all night shenanigans in the howling wind.

But there is also music and lots of great bands…

Friday night sees a run of bands who embrace the punkier end of the form. Opening where Pussy Cat & The Dirty Johnson’s whose garage rock fused energy rush was the perfect kick starter to set the stall. Fronted by Puss Johnson who is cooly dressed as a micro Camden cat-woman with a leopard skin tail and a powerful voice. She is an explosive presence, fronting the perfect power trio who are fired by the twin guitars which have that perfect shrapnel  sound and drummer who pumps energy with a rock solid beat – truly a fantastic band they set the bar high with their set.

Much talked about, Hands Off Gretel are a South Yorkshire outfit fronted by the charismatic whirl of energy and skinny flamboyance, Lauren Tate, whose debut album was described by Ged Babey on Louder Than War perfectly as  ‘without a ghost of a shadow of a doubt, my ‘album of the year’. It’s so full of sex, death, cartoon catharsis, lysergic psychodrama,  great stinging guitar and a drawling, roaring she-devil of a singer.’

With a grunge power and a Nine Inch nails machine-like groove, Hands Off Gretel are celebrating that moment when the intensity hits eleven out of ten and mining a long forgotten seam for their own inspiration. They have the power and sheer exuberant energy to own these old ghosts though and their set is a thrilling avalanche of noise and flailing multi-coloured dreads.

Obviously playing death bass in the next band up, the Membranes , I can’t review myself as there are laws of fairness here that govern music writing but maybe this would be a good place to underline things from a band’s point of view. It’s always a pleasure to play well run festival run by enthusiasts from the heart of a music culture. From the minute we got there to the minute we leave we were surrounded by helpful and enthusiastic people running the event, a great audience who were prepared to give everything a chance and a room full of people that it was great to hang out with all weekend and talk music, clothes, culture  and style in a  myriad of conversations that is a reflection of how great a festival can be compared to, lets say, the hopeless greed and mismanagement of the Hope and Glory festival in Liverpool over the summer. 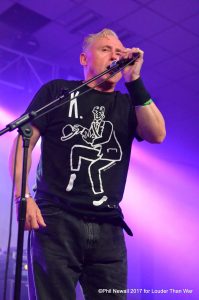 Headlining, Theatre Of Hate, yet again prove that they are a band back on the uppers with a set that drips in passion and emotion. Just how Kirk Brandon can still hit those notes with his stunning operatic take on post-punk vocals is something that has to be seen and heard and the band are very much on that trajectory that sees a late career embrace that the likes of the Damned, the Stranglers and SLF are all enjoying  – a high decibel Indian summer as they deliver their new material which has the same kind of drama as their also played classics. You are left drenched in the tidal wave of emotional imagination from the band with that unique sound of lead bass and sax and tribal drum power – nothing sounds like Theatre Of Hate, Nothing.

Day two sees a bill of bands that follow the more electronic and less guitar orientated end of the scene, although openers, Lupen Tooth, who are stepping in for Fuzzbox who had to pull out due to illness, are firmly in the horror punk tradition. The young Bristol-based band have used the Misfits as their creative base but are finding their own way with a brisk set of catchy ghoul anthems and quickly owned the big stage.

MASSIVE EGO is a legend on the scene, fronted by a tall man dressed with devils horns and armed with a luxurious dramatic baritone, Marc Massive, the band deal out a ‘NewRomantic-DarkWave-ElectroGothic-Pop-Industrial and were formed in 1996. Marc was an ex-model and dancer for Boy George’s 90’s Jesus Loves You band, DJ and art event curator has fronted the band from the beginning. The band were originally at the centre of the short-lived new romantic revival scene in London called ‘Romo‘ which culminated in a glowing half-page live review by journalist Simon Price in UK music mag Melody Maker. Since then they have built up a cult following and their dark velvet electro pop dramas seduced the audience.

Vince Ripper and the Rodent Show is a really cool concept – a cross between the Cramps, Suicide and Mad Daddy – the two-piece started as a radio show with Vince recreating noise collages of all his favourite boneyard classics and adding the charismatic former Alien Sex Fiend member, Ratfink, to front the operation.  owns the stage and stalk around in his leathers and white face paint doing the Lux and revisiting the flickering shadows of the mighty Cramps but what really rules here is that they are not a rock band – this is alive radio show, a spook cabaret, a deconstruction of the primal and it really works as a piece of art and apiece of post-rock brilliance without every wavering away from the artful and primal thrills of the Cramps themselves.

Ratfink owns the stage and stalks around in his leathers and white face paint doing the Lux and Vega show but gone Vegas, or in his case Blackpool, and its this home grown tower power edge that gives them a unique charm of their own, revisiting the flickering shadows of the mighty Cramps. What really rules here is that they are not a rock band – this is a live radio show, a spook cabaret, a deconstruction of the primal and it really works as a piece of art and a piece of post-rock brilliance without ever wavering away from the artful and primal thrills of the Cramps themselves.

Headliners The Birthday Massacre are making a big name for themselves on the dark shadows goth world the Canadian outfit deal distorted guitars, millennial goth angst and a dark-hearted cheer leader devotion to their cause. The six-piece dark wave unit delivers a  bewitching brew and get the biggest crowd of the weekend for their new generation gothique.