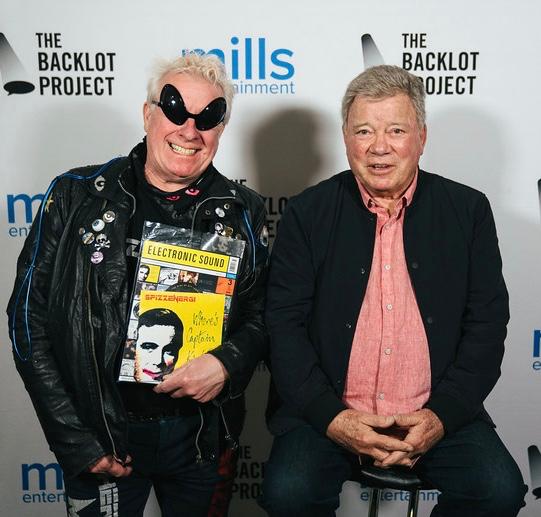 This is great.  Legendary sci-fi punk Spizz, gets to meet the even more legendary William Shatner – Where’s Captain Kirk?  Right here, forty years on from the classic singles release.

Spizz is clutching a copy of Electronic Sound Magazine – Issue 61 -which included a vinyl 7 inch re-issue of his Captain Kirk single (it’s Sold Out it seems!)  Look at that smile! Still a fan-boy.

We asked Spizz about it …

So what was it like finally meeting Captain Kirk?  Must have been amazing….

It was amazing yes of course . Full circle moment in space time continuum. It was always on the cards in my mind anyway. A song can write a life , life writes a song , you know …

Did you ever think it would happen?

Was it fate? It sounded fairly random

….. it was by design , a continuation of that airport idea all those years ago. We got tickets for the event … but my glamorous friend Sarah-Jane on the night managed to procure some gratis VIP tickets from a passing stranger . These tickets included the meet n greet. So our fate was indeed sealed .

When Capt. Kirk was released our manager asked people at CBS who were dealing with the Soundtrack release if we could do a photo op with Bill Shatner. They said no. They didn’t want any emerging independent record rivals getting any action. Fair enough but our bassist Jim knew someone at the airport Bill was flying in from. In those days airport security was a lot different. So we met up at the manager Dave Woods’ office on a Sunday morning and literally had the engine running with a view to photobomb Bill at the airport but only then did we get cold feet thinking it could be an extravagant use of time, petrol and failure. So we went to the pub and spent just as much money, if not more , having beers & Sunday pub lunch!

And that is exactly why the faithful love Spizz.

There are plans for a live album, Xmas single, a retrospective boxed set and  “Spizz is currently celebrating 40 years of DIY and Independence and will be touring again in the Autumn”

All words by Ged Babey – with huge thanks to Ben Wilmott who actually conducted the interview/chat and allowed LTW to publish.

Photo credit – Mills Entertainment, with thanks.