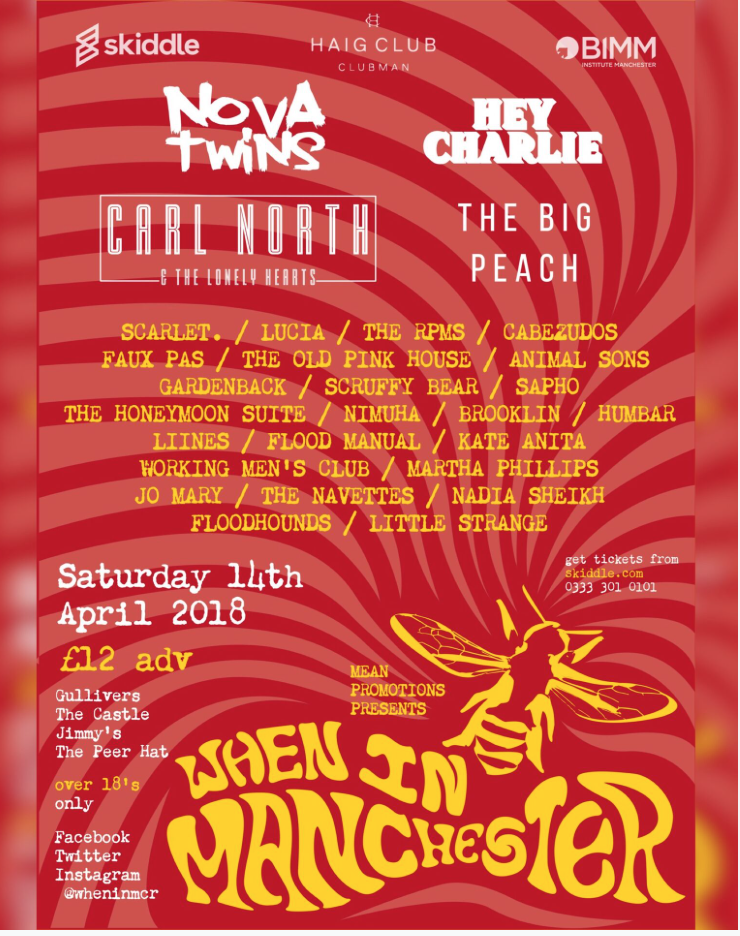 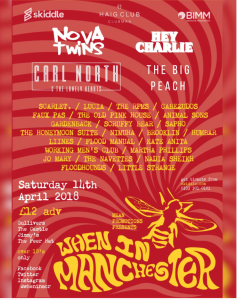 cWhen in Manchester Festival returns to the Northern Quarter to showcase the UK’s hottest up and coming artists of 2018!

When in Manchester Festival is a one-day metropolitan music festival, taking place in Manchester’s Northern Quarter on Saturday 14th April 2018. The festival will showcase the talent of 28 up and coming UK artists in association with Haig Club Single Grain Scotch, BIMM Manchester and Skiddle. The upcoming event will be held on 14th April 2018 at four of Manchester’s finest independent venues – Gullivers, The Castle, Jimmy’s and The Peer Hat.

In April 2016, the first When in Manchester Festival successfully sold out of all tickets in advance and has since more than doubled capacity of the event by adding two new stages. Headlined by the sensational Nova Twins, London’s coolest trio Hey Charlie, the new rising stars of Manchester music, The Big Peach, and the inimitable Carl North & The Lonely Hearts, the upcoming edition is set to be another storming success.

Curated by Ellen Offredy, Abigail Richardson, Nicole Burrows and Miriam Rahimov, When in Manchester Festival aims to bridge the gap between artists and festivals by giving emerging talents the opportunity to showcase their music to a dedicated audience. Unlike many major festivals, When in Manchester prides itself on promoting gender equality in the music industry, with some of the festival’s previous line-ups featuring 70% of artists with one or more female members. With LIINES, The Honeymoon Suite, Sapho, The Old Pink House, Gardenback, Nadia Sheikh, The RPMs and Faux Pas, When in Manchester is proud to present more unstoppable upcoming names joining the headliners across four venues.

When in Manchester Festival is excited to have teamed up with Haig Club. Endorsed by none other than David Beckham, the single grain scotch is growing in popularity thanks to its unique taste and look, making it the perfect addition for a music-fueled day out.

Additionally, ‘Europe’s best connected music college’, BIMM Manchester are on board to give audiences an early glimpse into the next generation of major festival headliners. The final piece of the puzzle comes in the form of the festival’s official ticket outlet, Skiddle – with over 2.3 million happy customers, the independent ticket agent are here to make purchasing your When In Manchester tickets as easy as possible!

Find When In Manchester on