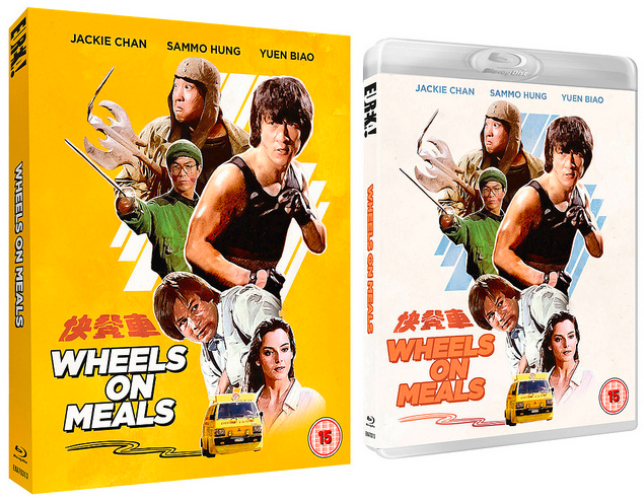 Jamie Havlin assesses one of the most highly regarded martial-arts comedies ever made.

Jackie Chan, Sammo Hung and Yuen Biao: three boys who became pals while they attended a Peking Opera School. Each of them went on to become legends of Hong Kong kung fu cinema. The trio would stay friends and collaborate a number of times on films like My Lucky Stars and Project A. In Wheels on Meals, The Three Brothers join up in a Barcelona-set action comedy.

Two cousins, Thomas (Chan) and David (Biao), run a mobile snack van called Everybody’s Kitchen. It’s a yellow Mitsubishi van, but is fitted with the kind of computerised technology that must have struck 1980s audiences as positively futuristic. They park it in the middle of a busy plaza: David is the chef, Thomas is the skateboarding waiter, taking and serving up orders while zigzagging around crowds of tourists. 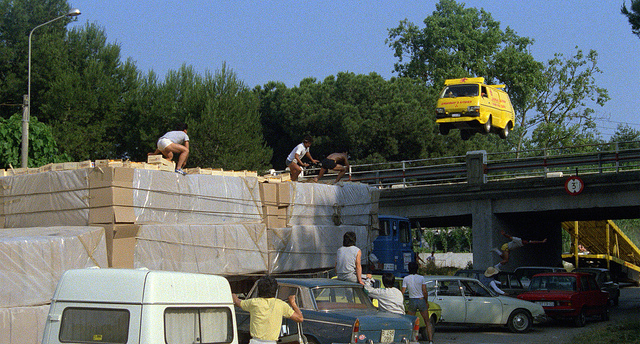 During some time off, they visit David’s father, who’s recovering from a nervous breakdown in a psychiatric hospital. Here David and Thomas first come across a young Brooke Shields lookalike Sylvia (Lola Forner), by whom they’re immediately smitten. They run into her again that same night as she’s being chased by a man whose wallet she has stolen. She stays that night in the boys’ flat, and this time around she helps herself to some cash belonging to both of them. Not that this puts them off her.

By the kind of complete coincidence that is common in movies like this, their friend, inept private detective Moby (Sammo Hung) has just been paid a large wad of cash to find Sylvia and he involves the pair in the case. And guess what? He runs into her – not realising her identity – when the pair collide in a car crash, Sylvia pickpocketing him in the aftermath of the accident. Unfortunately for Moby (and David, Thomas and Sylvia), he isn’t the only person trying to track her down. Sylvia is also being sought by some local thugs. It emerges that she is the long-lost daughter of Count Lobas, a man of great wealth who has just died, leaving his money to her. There’s a caveat, however. Her inheritance must be claimed within fourteen days, or her father’s unscrupulous brother Mondale will be awarded the legacy.

When Sylvia is kidnapped, Thomas, David and Moby team up to rescue her, infiltrating Mondle’s castle and taking him and his men on in a series of spectacular martial arts battles, where Jackie Chan, Yuen Biao and Sammo Hung all get to demonstrate their prowess in separate fights – the pick of which has to be Chan taking on a suited and bow-tied henchman, played by international kickboxing champion Benny ‘the Jet’ Urquidez. 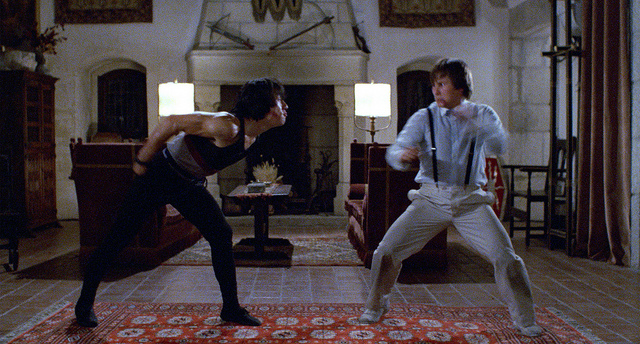 Wheels on Meals does lag on occasion, especially in the first half, and some of the “lunatic” scenes should have ended up on the cutting room floor. But the lead characters are so damn likeable that this can be forgiven. Chan, Biao and Hung obviously share a great chemistry together and some of the action sequences are both thrilling and funny.

The car/van chase is superbly choreographed and the way Chan scales Mondale’s castle is incredibly inventive. Yuen Biao is at his acrobatic best during a showdown with a thug played by Keith Vitali, a man who in real life has been inducted into the Black Belt Hall Of Fame. As always, it’s amazing to witness Sammo Hung’s athleticism. Benny Urquidez noted that he was stunned to see a man of Hung’s size moving and fighting with such remarkable physical dexterity.

Although he likely said nothing at the time, Hung was also the film’s director. He did a good job in that capacity – although I’m not sure that the same could be said of the hairdresser who gave him the dodgy perm.

This release from Eureka Classics is the debut for Wheels On Meals on Blu-ray in the UK. There are a plethora of extras, including a limited Edition Collector’s Booklet featuring new essays by James Oliver and Scott Harrison (first print run only), plus archival interviews with Sammo Hung, Yuen Biao, action choreographer Stanley Tong and more.

For more on the film: https://www.eurekavideo.co.uk/classics/wheels-meals