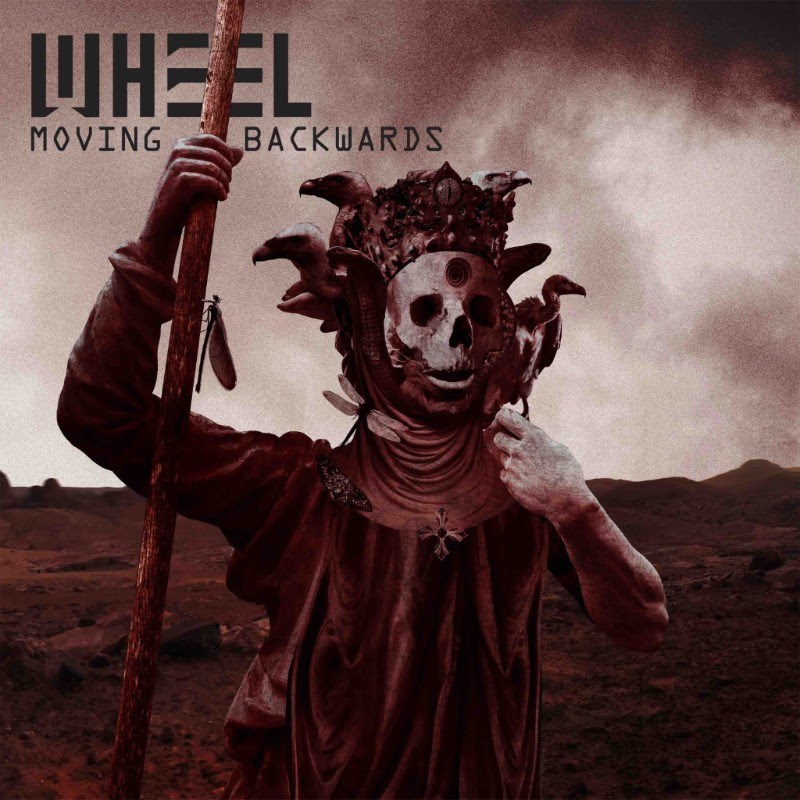 A fine review in PROG magazine piques the interest about a band who might sound like they might be some distant relative of the musical creation that is Tool. Moving backwards proves one step well worth taking.

Yes, the name even sounds like it belongs in the same market place as Tool, but if you find you’re too challenged by listening to the likes of  Tool and some of their higher themes and feeling guilty and slightly uneducated  because you don’t quite ‘get it’, Wheel are a much more friendly alternative. Friendly in the accessible sense yet retaining all the imaginative hard edged potency and  cut and thrust of those who inhabit the same sonic spaces. Singer / guitarist James Lascelles might bemoan not quite knowing where the Anglo-Finnish outfit belong but who does actually enjoy being pigeonholed.

Lyrically the subject matter of the new album is deliberately complex. On Moving Backwards, they turn their gaze to censorship and institutionalised mind control. Lascelles has talked about the idea of being “in a place where nobody can say anything anymore.” A crazed political correctness gone haywire and the opportunity to offend with any possible utterance. Not so much “an environmental or economic dystopia…more of a social one.” Quite a chilling thought.

On the musical side, they’re not afraid of challenging with some extended arrangements that hit the ten minute mark that sit beside some short, sharp shocks. The juddering instrumental passages accompanied by rumbling tribal drums that open the track Wheel itself, evolve into an unshakably solid riff that builds into a ten minute tour de force,  inevitably proving difficult to follow. They have a damn fine try though; Tyrant sees the dynamics of cool mid paced sections vying with angular ducking and diving and while Skeletons might appear lower key yet manages to maintain and intensity that threatens with some daunting atmospheric passages but never boils over and showcasing some of the dynamic and rolling drum work.

You can award  a gold star for achieving their aim to make an album that’s focussed on creating a piece of art rather than commercial viability. Towing the line between Prog Metal and Prog Rock, the vintage sound combines with a vital contemporary edge. Moving Backwards fulfils the anticipation of being a thrill seeking white knuckle experience where riders can come together to wallow in a debut album that takes a few risks, throws in a spot of derring do and conjures up a genuine sense of excitement and the buzz of a new discovery.

Watch the video for Up The Chain (Moving Backwards) from the album: