Home Blogs What You See … Is What You Get – Stiff Little Fingers... 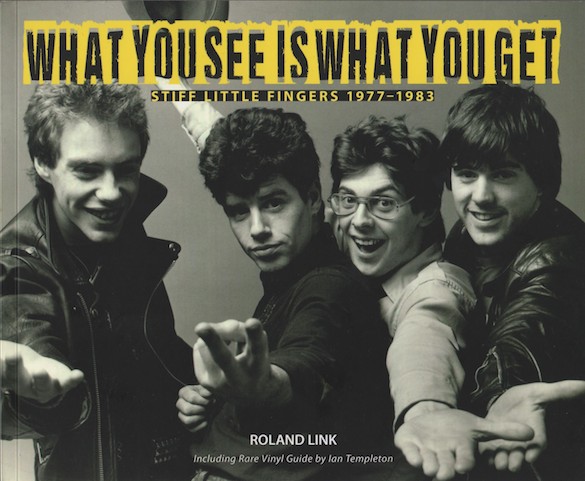 ‘What You See … Is What You Get’ is the first book to bring together a wealth of superb period photography depicting legendary Belfast band, Stiff Little Fingers. For Louder Than War, macthehack reviews.

Stiff Little Fingers are one of those bands that it’s great to discover someone has decided to write a book about. Not one of the ‘era defining’ heavyweights but a band that had a genuine anger and frustration which certainly struck a chord with many an alienated teenager – regardless of our ignorance of life in Northern Ireland at that time.

That book was ‘Kicking Up A Racket’ by Roland Link. So what’s this then ‘…Racket’ part two? Not quite, but as author, or perhaps compiler in this case, Link is quick to explain, ‘WYSIWYG’ is a companion piece born out of Link’s seemingly obsessive research. In short it’s a picture book spanning the years 1977 to 1983, from the Fingers formation to their original dissolution, year by year with promotional photos, press adverts, ticket stubs, record sleeve artwork and photos – professional and personal – of the band on and off stage, collected together as part of Link’s research and preparation for his biography of the band.

I’ll be honest, I wasn’t sure about it. How much more would it add to the previous book? Well, surprisingly the answer is lots. It might be a help if you remember the era, it might also be a help, if you were never that good at hanging onto the ticket stubs, music paper adverts and your own amateur gig photographs all of which are lovingly celebrated here. Your ticket stubs might not be from Portsmouth Guildhall, Glasgow Apollo or Leicester De Montford Hall, mine weren’t, but seeing just a few from fans collections is wonderfully evocative.

Of course it’s a book of it’s time; no Facebook, Instagram, Tumblr or You Tube in 1977, which is why this book makes sense. Link has unearthed genuinely unseen images from private collections and put them alongside memorabilia that lives in shoe boxes rather than on servers.

Like any good music book, it should make you want to go back to the source (inflammable) material – and it does. In fact it reminds you of your own relationship to the band – however distant via TOTP and NME – while dropping in little snippets that make it more than just a scrapbook, with quotes from the band, along with a narrative of each year and and explanation behind the images chosen for that year.   The quotes range from the fact that Jake considered ‘Go For It’ his personal favourite SLF album from that time, to Henry Cluney on that leather jacket, from halfway through the Rough Trade tour; “he (Jake) could take it off after the shows and stand it on a table, or wherever and it’d stand up on it’s own. It was completely rigid with sweat.”

Jim Reilly tells the story of the cover photo on the ‘Straw Dogs’ single and my own favourite image in the book is the cover of ‘Alternative Ulster’ an absolutely brilliant image I was far too young and stupid to fully appreciate at the time. If your old SLF singles, cuttings, badges and photos are in the loft, lost in multiple house moves or disposed of in an unwise moment of eBay madness, then this book is definitely for you.

Even if you don’t fall into any of those categories ‘WYSIWYG’ is a brilliant time capsule, offering an insight into the life of a band from playing bad heavy metal covers to becoming one of the key signings to Rough Trade (curiously airbrushed out of the history of the label), to being a major label headline touring act.   I’m not sure it’s a story that could be repeated today, which is part of what makes this book so worthwhile. But ultimately it’s as book by enthusiasts, for enthusiasts – it’s what comes through most strongly of all both from Roland Link and the people he tracked down and persuaded to open up their personal collections.

Also fascinating – for those of us with a trainspotter-ish disposition, I’ll admit, (zips up anorak) – is Ian Templeton’s CSI level forensic report on SLF rarities. It got me searching out my copy of the first single, but of course, it’s not the rare one, although I had no idea of all the slight variations or how to tell them apart, until now. I take my hat off to you Mr Templeton.

Is it absolutely essential? Possibly not for anyone other than SLF Fans. But it is a fantastic record of the band and a testament to a time, which if you lived through it, will resonate.

Which is all very well, but why take my word for it, when Jim Reilly sums it up like this; “When people ask me about Still Little Finger, I’m going to point them towards two books; ‘Kicking Up A Racket’ and ‘What You See Is What You Get’ – job done.” It’s like the man says.

Grab a copy of the book here.

All words by MactheHack. You can find more of Brian’s work by checking out his LTW author’s archive.