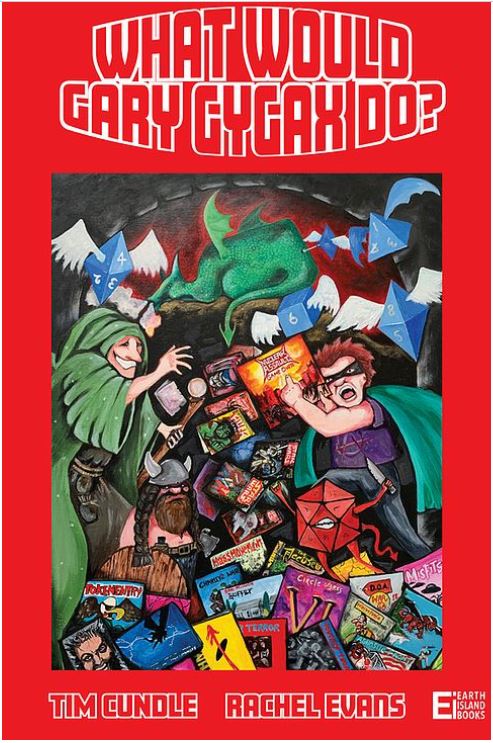 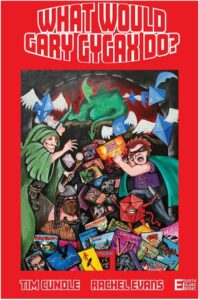 What Would Gary Gygax Do? by Tim Cundle & Rachel Evans (Earth Island)

Nathan Brown reviews a compendium of 55 short stories for punks and hardcore kids.  Perfectly crafted for people with a short attention span.

The author of What Would Gary Gygax Do, Tim Cundle, comes from the DIY punk scene. While I’ve never heard of his bands I know his zine, Mass Movement. Rachel Evans provides cartoon style graphics for the cover and as a teaser/marker for each story. This book will particularly appeal to people of a certain age immersed in the punk scene.

The cultural reference points outside punk and hardcore are the likes of Planet of the Apes, Scooby Doo, Tiswas, Grange Hill and, of course, Star Wars. The central strand running through a lot of the book is punk (of course) or at least the version of it I’ve loved for the past 40 years. It was amusing that having defined what punk is, 1 page later the author declares “no set rules, it meant something different to everyone and that was its beauty”. On several occasions he recounts how money tried to buy out punk after it had survived all those years in the wasteland. He mentions heavy metal and hip-hip too, but these are almost asides.

If you like taking a dry sardnonic potshot at life this book is for you. I can hear the influence of Henry Rollins’ voice within the irreverent, unapologetic, tone. Cynical, dry humour with a dose of misanthropy leaps off the pages.  Religion, capitalism and sexism all get a kicking alongside the odd appeal to “pool our resources and work together”. Working through small town bullshit these tales take in school, work, teenage years, punk gigs, drinking, incidents with the police, badly organised festivals, gaming. It’s all in there. HC bands like Agnostic Front and Gorilla Biscuits get a mention. You could say it’s kinda like a guide to getting through life and a reminder that it’s ain’t gonna be easy.

I thought the tales of drunkenness captured the experience and emotions fairly well. There is a hilarious, acerbic, take down of hippies for the capitalists in alternative clothing they sometimes become.  I nearly spat my coffee out (black of course, in keeping with the milieu) when I read the line “Bitterness, I could write a book on the subject…” Erm, you did mate!

There are personal moments dealing with death and a harrowing account of sexual abuse which aren’t comfortable to read. As most of this is written in the first person, it’s difficult to tell which of these stories are fiction and which are confessional. Some of it rings true and I was left wondering which tales were based on real life – the mark of some talented writing. Much of it is all too relateable and familiar. I even recognised the cameo appearance of a couple of characters from the real South Wales punk scene of old.

The exception is the odd foray into science fiction, completley divorced from reality. The two mini comic strips at the end of the book connect up fantasy/science fiction with the world of punk nicely. 55 short stories, mini-essays and strips over 392 pages seems perfectly crafted for people with a short attention span…or qualify What Would Gary Gygax Do? as one of the books you leave in the toilet.