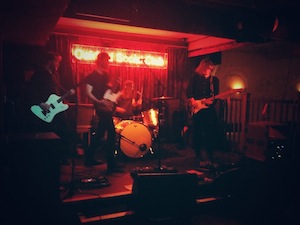 Anthemic four piece band Whales in Cubicles are not just one of the most brilliantly named bands around but also one of the most exciting rising acts you’ll have the pleasure of seeing. Chris Craddock reviews.

We quickly shifted down a few gears for the next act on the bill. Hannah Lou Clark’s beautiful vocals and superb melodies entranced and enthralled all there.  Any musician that wears a black turtleneck at a gig is usually onto a winner but the hauntingly beautiful music stole the show from the iconic piece of clothing. It’s true testament to a musician’s craft that Hannah Lou Clark emerges from the ashes of the fantastic FOE with a captivating set of music. CeCe joined her on stage and together their wonderful harmonies topped off a gorgeous show that left many there feeling a tad emotional.

Whales in Cubicles wasted little time in raising the roof with their giant sounds that their debut LP is littered with. It hardly takes any time before you realise that they are a perfectly named band – they’re full of large and also familiar music that has hints of Smashing Pumpkins and The Pixies but in a smaller setting than you’d expect to hear it. Their set is expertly balanced between these thumping numbers like Yesterday’s News and tracks like All The Pretty Flowers that flows gracefully giving the crowd a moment to collect themselves.

It’s a set that has everything you’d possibly want from a live show. The room was filled with huge songs like Nowhere Flag that has the addictiveness of a Coldplay track but doesn’t make you feel guilty about loving it. Really this tiny, adorable venue was an apt setting for a band called Whales In Cubicles. The massive music emanating from the band just about squeezed into the gig and it was most definitely a spectacle worth beholding.

All words by Chris Craddock. More writing by Chris can be found in his author’s archive.