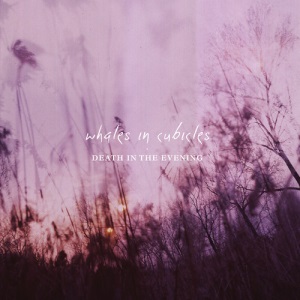 Whales In Cubicles: Death In the Evening (CLUB.THE.MAMMOTH.)
LP/CD/DL
Out 10 February
7/10

As grim a truth as it is for rock music fans to face, there isn’t a huge cache of ideas to craft brand new songs and albums from. Most of the best ideas have been used already. Most bands have to reclaim used sounds and make them their own. Originality has to be manufactured.

Death In the Evening is the debut album by Hackney based trio Whales In Cubicles, and it would be futile to deny it contains echoes of numerous bands that have come before. That they’ve chosen to utilise the sounds of bands of decidedly variable quality shows this is an outfit willing to take a gamble. That one of those bands is Razorlight suggests their recklessness knows no bounds.

It’s to Whales In Cubicles great credit as musicians that they mostly get away with it. Opening track Yesterday’s News is a fine way to start any album, as a strong beat and tasty riff pile into a proper singalong with great success. Does it matter that it sounds a bit like Feeder? It’s Polythene-era Feeder, so I guess that’s all right.

We Never Win is a highlight of the band’s live set, though it’s here we have our first brush with the spectre of Johnny Borrell. The song is strong enough to banish the evil presence and Whales In Cubicles could be forgiven this lapse, until the hideous apparition returns in Across America. Yes, they’ve even included the word America in the title. Are they goading us?

Merciful redemption arrives at track six in the form of Disappear, a former single and standout track. This is followed by Nowhere Flag, which appropriates the sound of ignored ’90s band Glitterbox. No track better exemplifies how, at their strongest, Whales In Cubicles can take old ideas and create new noise to exemplary effect. I Knew It contains a smattering of Muse, although that’s probably due to Muse proving able robbing bastards themselves over the years.

The album ends with Find Your Way, which at 8 minutes 40 does a very good job of seeming half that length. There’s familiarity even here, though, with the shoegaze shimmer of AWOL London band Engineers seeping through the cracks. Mind you, if you’re going to emulate anyone it’s as well to be an excellent band like Engineers rather than filth like Razorlight.

Given its apparent influences, it makes little sense that this album works. As the years since the birth of rock and roll tick by, bands are obviously going to have a harder time not sounding like things that have come before them. In choosing to make good music from bad, in some cases heinously bad, Whales In Cubicles have loaded the gun and pointed it at their own heads.

That it doesn’t go off is happy news for us all, as if they can consolidate and build on this deft debut they may end up the ones being copied a few years from now.

All words by Chris Lockie. You can read more of Chris’s writing for Louder Than War here or follow him on Twitter as @acynicalman.