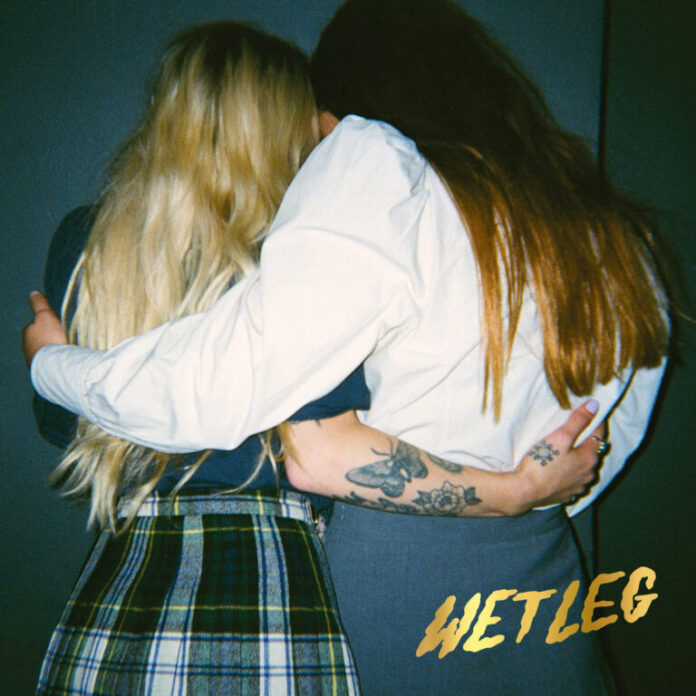 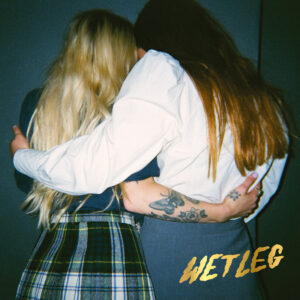 I was so excited to see the preview stream of Wet Leg’s debut album pop up in my inbox last week I had to play it straight away. I was at work, in a room full of my students, who were busy planning imaginary festivals. Heads bobbing, feet tapping, smiles all round. And some very weird and wonderful festival plans came out of that lesson.

Which is fitting, as it was apparently a love of festivals that brought the Isle of Wight’s Rhian Teasdale and Hester Chambers to the astute decision to form a band. “Initially, we started the band because we wanted to get free entry into festivals,” says Rhian. “Being at a festival and being a bit inebriated helps you come up with your best worst ideas – you get that sense of drunken clarity on things. I still have flashbacks of us earnestly declaring to our friends that we were gonna start a band and that the name would be ‘Wet Leg’. The general response being a slightly patronising pat on the back and a ‘Sure you are’”.

This confirms my first impression of Wet Leg: they are ‘doing it because it’s fun’. And it really is the best kind of fun – clever too. The album is a glorious selection of bright ideas, 20-something musings and in-jokes, set to highly accomplished riffs with just enough punk in their indie for my money.

If you like your reviews with some neat comparisons, have these: they do that Pixies quiet–loud thing, with Elastica Brit-pop vibes, and 21st century pop. Moreover, they are uniquely Wet Leggish. Which is, we hear, now a thing.

When I first heard Chaise Longue (shared in the group chat for my band I, Doris with the words “why didn’t we write this?”) I melted at the thought of Rhian and Hester rhyming ‘long’ with ‘longue’. They probably pissed themselves laughing about it, so they repeated it over and over, until it was an earworm embedded in skulls around the planet.

Chaise Longue was released in June 2021 and has 3.5m YouTube views and counting. It’s a silly, fun nonsense song about shagging on a posh sofa, with a self-directed cottagecore video. It captured a moment, and allowed a brand new band to sell out an entire tour on the strength of this one song. We live in an erratic online world now when overnight viral hits are becoming commonplace; what’s more noteworthy is for the viral hit to be backed up by sell-out shows, critical acclaim (ranked #2 in the BBC Sound of 2022) and an album full of solid, polished songs. Right proper tunes, right in the face of anyone who might have wondered if these Wet Legs were to be one-hit wonders.

Their humour is at once puerile and arch, but we’re invited in on the joke – see Chaise Longue’s Mean Girls reference “Would you like us to assign someone to butter your muffin?”. If music can have a fourth wall, Rhian breaks it; conspiratorially beckoning the listener – particularly the female listener ­– to join her in raising a sly eyebrow. Fleabag turns to camera and smiles; Rhian lets out her “longest and loudest scream”. I am so here for this. Girls grabbing guitars and making saucy songs that make women want to jump on stage with them, and enrage old guard musos.

The album opens not with ‘that song’, instead with Being In Love – a dreamy showcase of their simple, catchy verse to big, fuzzy, bouncy chorus template. It’s a winner and I’m unashamedly taking notes. ‘That song’, Chaise Longue, follows – have I heard it enough already? Turns out, no, it’s still a banger. If you get through this song without a wiggle or a smirk you need a word with yourself. I’d also recommend playing it to small children (who LOVE it, of course, because children always love good, fun things), and listening to their attempts to join in the chorus. “All ding dong on the sing song” are the alternative lyrics in this particular kitchen and we’re sticking with them.

Angelica takes us down a psychedelic path, on the theme of tragically disappointing parties. Have these bright young things already worked out that house parties and drugs are fucking awful? (Hats off to them, it took me until well into my thirties to get there.) This is born out by the following track, I Don’t Want to Go Out, which lays on the 90s grunge ennui so thick you can smell the Heather Shimmer lipstick.

And now I’m almost 28, still getting off my stupid face – a fucking nightmare
I know I should care. Right now I don’t care.

We all cheer right up for next track (because by this stage in the album, I am totally with Wet Leg. We are top pals, having a great time here thanks.) Wet Dream is a dancey riposte to “A pretentious ex-boyfriend who sends unwanted texts declaring he’s dreamt you were back together and happily married”; it’s like the opposite of an Adele song. I love it, and prescribe it to any recent singleton tempted to reply to a late night thirst text from an ex.

My new favourite song from the album is Ur Mum. I came for the title (so delighted that the youth still know how funny the ‘Ur Mum’ joke is, although of course in our day it was ‘your mum’, and fields for miles …) and stayed for the excellent handclaps in the chorus, potty mouth (You’re always so full of it / Yeah why don’t you just suck my dick), and full throat screaming finale. I’ve not seen Wet Leg live – yet – but want to mostly just to join in the screaming! What a brilliant, empowering, enthusing release.

Rhian wrote it one evening on a break from her old job as a wardrobe assistant, where she was working on a fast food commercial. “I snuck my guitar into my hotel room and wrote it at the end of a long, boring day,” she explains. “Sometimes it’s just good to have a big scream, isn’t it?”

More shamelessly ear wormy goodness with Oh No. The video’s screenshots of online comments the band has received are a stark reminder of why musicians need to step away from social media sometimes – a perfect storm of hyperbolic praise, vile insults, unsolicited advice, random thirst, and a thick side order of misogyny. Ugh, throw that phone in the sea babe. Then we catch some lush Violent Femmes vibes on Piece of Shit – the most melancholy song on the album. That guy who tells you what a good guy he is in one breath, while he’s calling you a slut in the next? Oh we know that guy, and fuck yes he is a piece of shit. Too Late Now closes the album with an atmospheric, experimental meander, complete with a Sprechstimme interlude drawing the album’s themes together neatly:

The song fades to feedback squeals, and peels of laughter – and that’s the album done. Simply, impactfully, joyfully. Rhian says, “We’re not virtuoso guitarists or anything but making music isn’t about that for us. It’s just: ‘Does it sound good?’ Often it’s the rough bits, the weird wonky melodies that you hold on to.” “Also, are we having fun?” adds Hester. We really are, cheers Wet Leg!

Wet Leg is available to pre-order on exclusive clear vinyl (with a 7” of two non-album tracks) via the band’s webstore, standard vinyl, cassette, CD and digitally. A variety of merch (T-shirt, print) is available as a pre-order bundle too.
Pre-order: Wet Leg Store | Digital