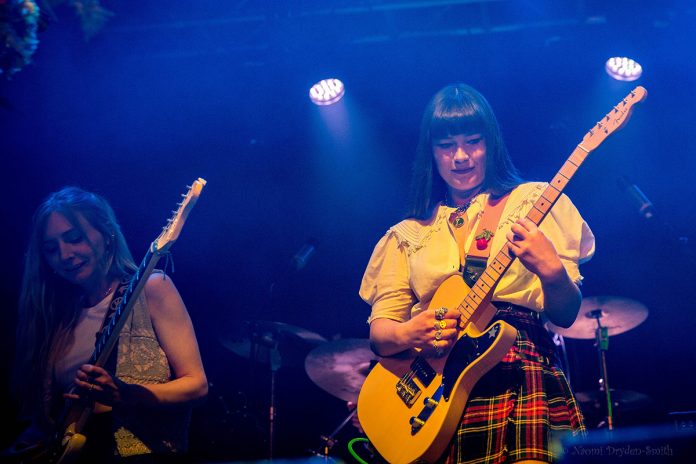 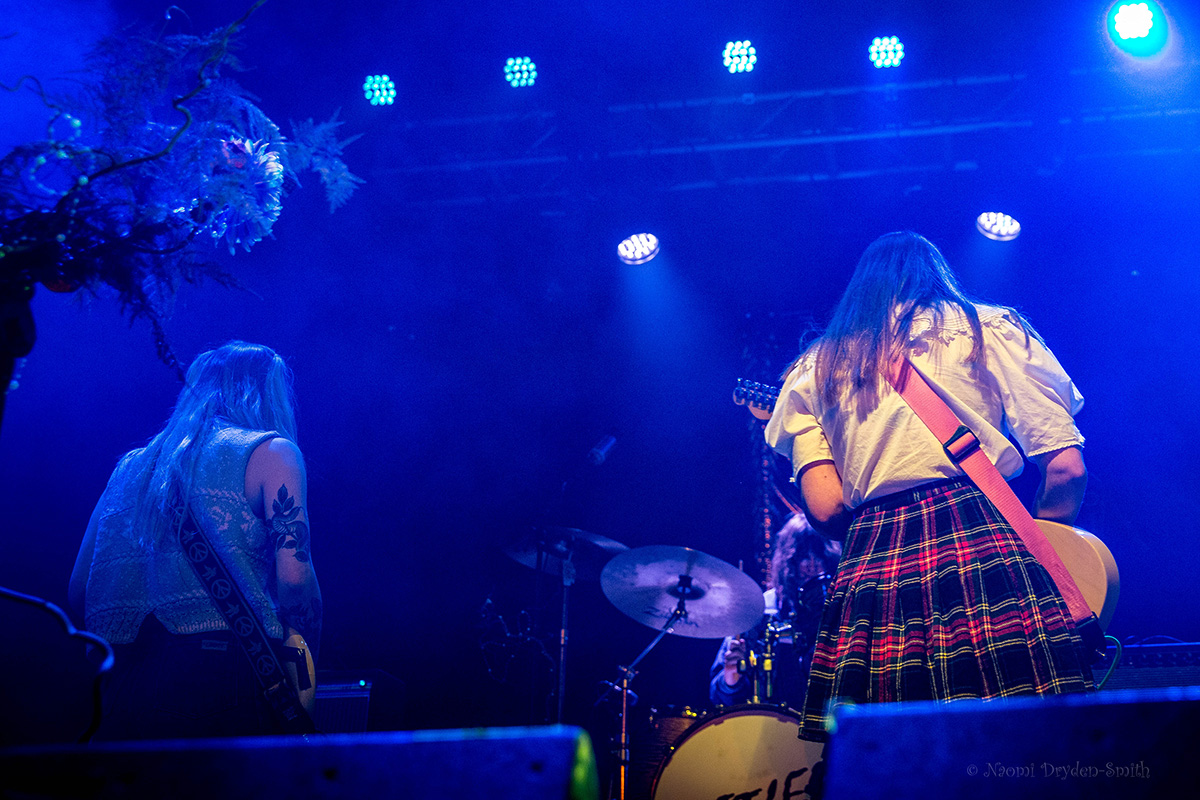 Once Wet Leg’s debut Chaise Longue started hitting the radio playlists it seemed as though everyone wanted to know who this band were and where they could be seen. Now the hit album has arrived it seems as though the band that started off as a bit of a laugh has managed to achieve a number one album, play gigs in far off places and receive mass adoration from music fans around the world. Keith Goldhanger goes to witness the live show, Naomi Dryden-Smith provides the photos.

The last time we bumped into Rhian Teasdale she was standing at the side of London’s Scala, watching on as her replacement took on the long introduction to Plastic Mermaids’ masterpiece we know as Saturn. We imagine this may have been around the time (October 2019) that, alongside Hester Chambers, the first foundations of Wet Leg’s songs we hear tonight were being laid down that resulted in their self-titled chart bound debut album.

What Rhian does is incredible – once you’ve seen this band you’ll recognise what we’re on about. (Louder Than War – October 2017).

What we were referring to at this time certainly wasn’t anything to do with ditching her cameo with IOW’s Plastic Mermaids to form a band of guitar-wielding Strokes/Belly/Elastica inspired, loveable, catchy, indie pop that the nation seems to love in 2022 (other opinions are available). We wanted more of the world to witness Rhian’s ability to achieve jaw-dropping reactions in front of the uninitiated whenever she appeared with the band whose albums and live shows we’ve covered here more than once over the years preceding tonight’s show. 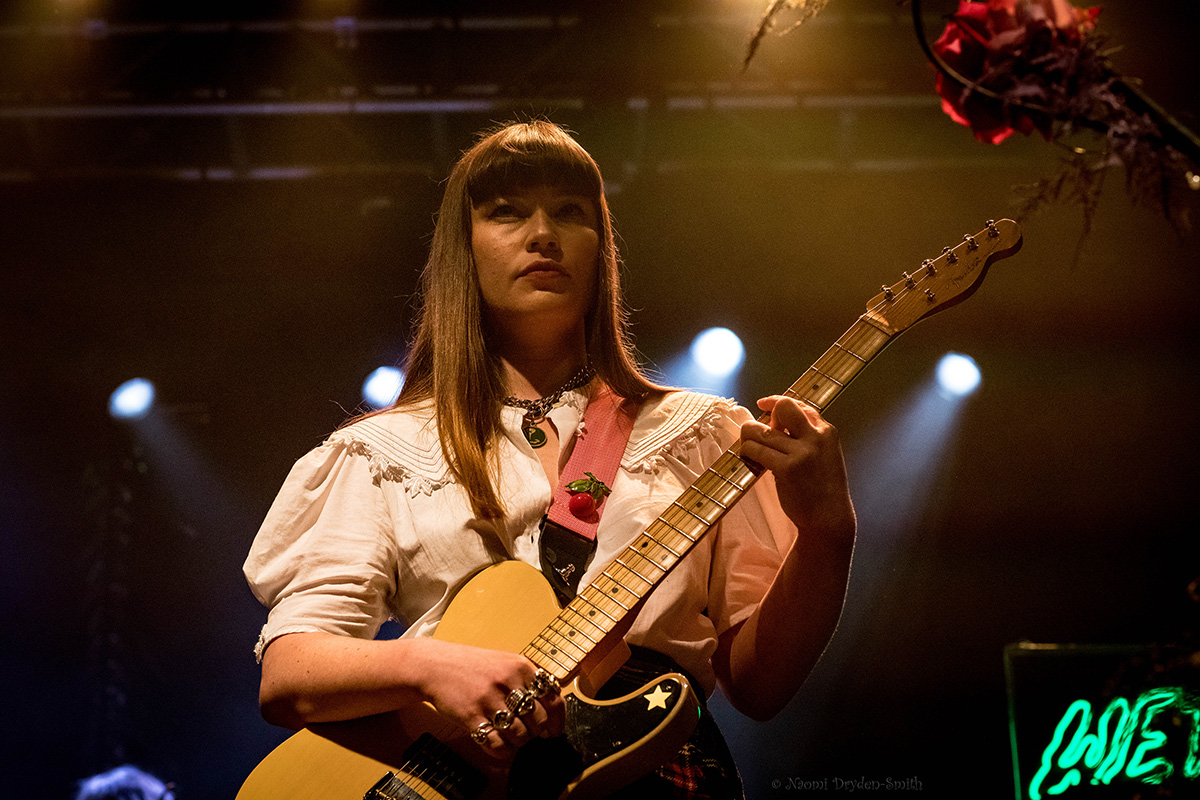 This Wet Leg stuff hasn’t gone too badly though.

Working our way backwards you already know how they end the show tonight. What we get leading up to (what is now) the most irritating song for decades (albeit one that forced many of us to investigate more once we’d heard it for the first time) is an hour or so featuring the rest of the album plus one or two new songs; a casual hug recreating their album cover; some spinning around on the spot; lots of laughter from the personnel involved; and an audience who know when to sing along to the catchy bits without ruining it by also singing the verses too.

Once or twice the band do acknowledge our existence. They’re having far too much of a great time to remember what they’re here for, we imagine. We’re halfway through before Rhian asks us how we are and if we’re OK. It’s as though she’s suddenly remembered to switch on the autocue and start behaving as a front person should. The band are still not used to having 1500 people standing in front of them lapping up every moment.  One new tune, Abducted By A UFO, we’re sure is a tune the band spoke about previously as an old song they may drag back out again one day. Tonight, it’s given an airing as Rhian discards her guitar to concentrate on dancing around, singing (about being abducted by aliens) and laughing along with her bandmates as the tune crashes around sounding very much like a song a band would write during their first few hours in a rehearsal room. It’s not their finest moment of the evening but an indication that the band are still in their infancy despite being under such scrutiny at the current time. The best moments are the other singles, Wet Dream, Ur Mum, Angelica and Oh No. Proof that the band are not going to be owners of the greatest one hit wonder since Electric Six’s Gay Bar. 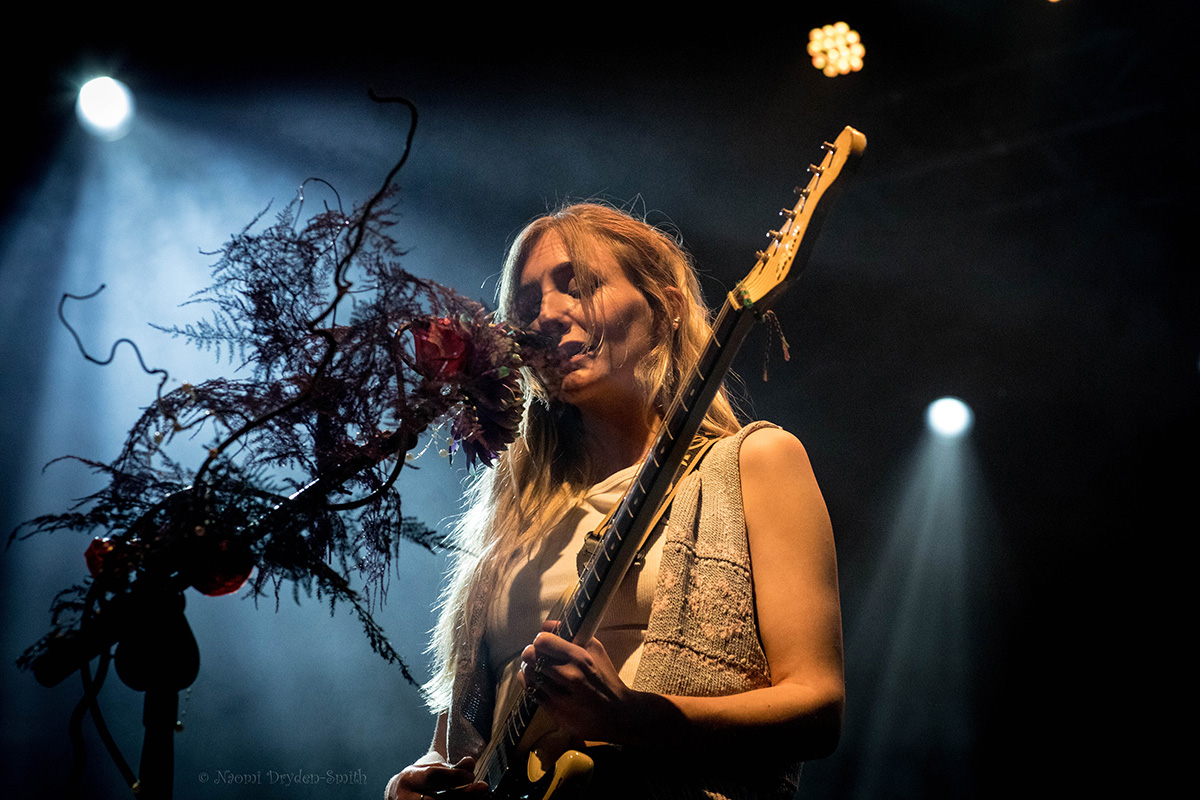 Rhian’s connection and partner in crime Hester seems to be a major factor in what makes this all work. We feel there may be a few private jokes going on in front of us and sometimes this may be irritating (because we all want to be in on the joke) but we can see that without these interactions they may not have managed to have reached this far. Wet Leg are obviously having the time of their lives, mates together in a band, having a beer, dancing around in front of more people they ever imagined was possible, and all after they appear to have ditched everything they ever knew previously and decided to start a party amongst themselves which is now taking them literally all over the world. Something every band we ever stand in the same room as would dream of at some stage in their lives.

We get a glimpse of how really great Rhian’s voice is during the un-released Obvious; a slow song she sings whilst gently strumming her axe before the gentle introduction of what sounds like a Theremin. It’s a great moment and allows everyone a little breather before the band hammer away at the rest of the set. When the big hit arrives at the end, its played with such gusto and speed you know they’re simply now running for the finishing line before unplugging everything and getting on the bus that’ll be heading for the next day of their lives. George Michael’s Careless Whispers merges through the speakers just as the feedback ends, before anyone a has had time to scream for an encore, and at the same time the security has decided to empty the room as though there’s a major fire in the building. 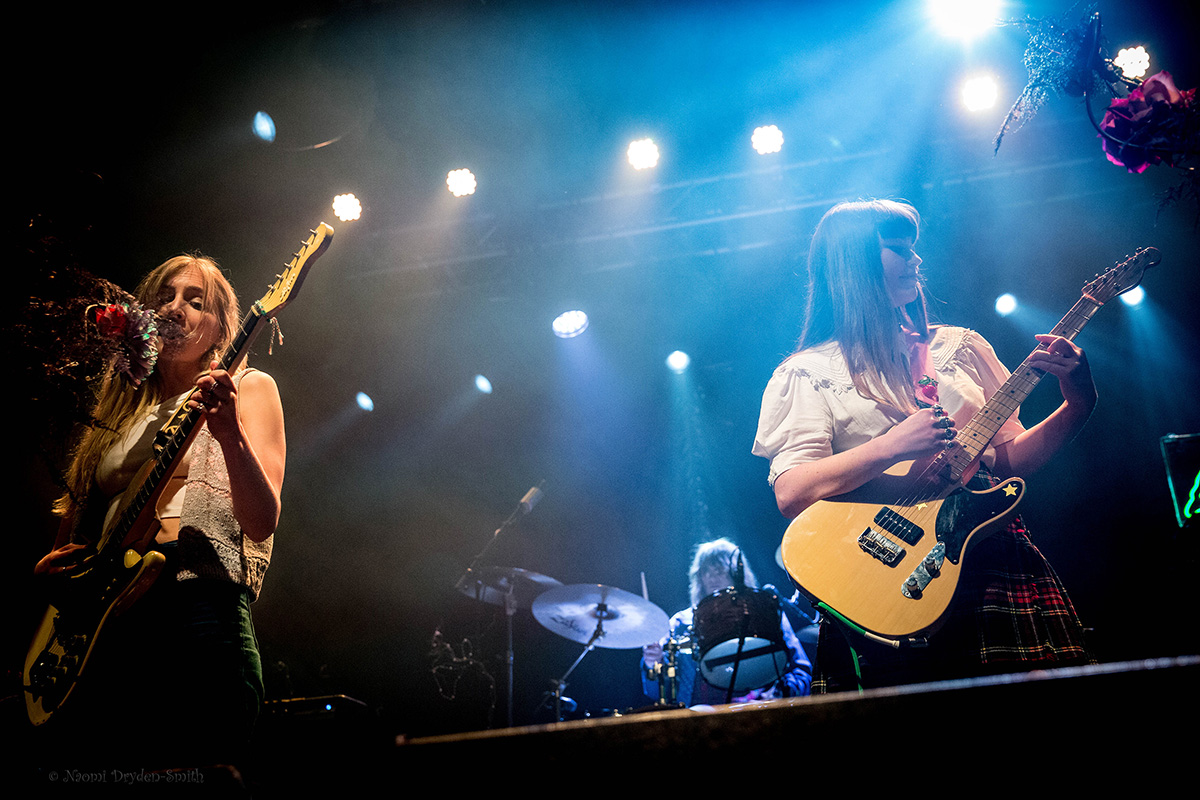 We learn tonight (if we hadn’t realised this already) that Wet Leg are not just ‘that band with only one song’. The debut album is a fabulous snapshot of where these people are at currently. It seems to have come fast but it also seems to have arrived just at the right time. Write them, record them and chuck them out as some bands might say. For many bands this wouldn’t work but for Wet Leg it does.

Next time we see them they may possibly have been around the world another time. This cannot occur without a few more stories sing about and provide us with even more catchy choruses for an even bigger audience to sing along to in the future. These five people must be on the biggest trip any band have been on in such a short time span and we’re still yet to hear Rhian getting all Pavarotti about stuff. You wait until that happens.

If it ever does.

Please respect our photographers: Ask permission before using images. If you wish to use/purchase or license any of these please contact Naomi Dryden-Smith at naomi@louderthanwar.com