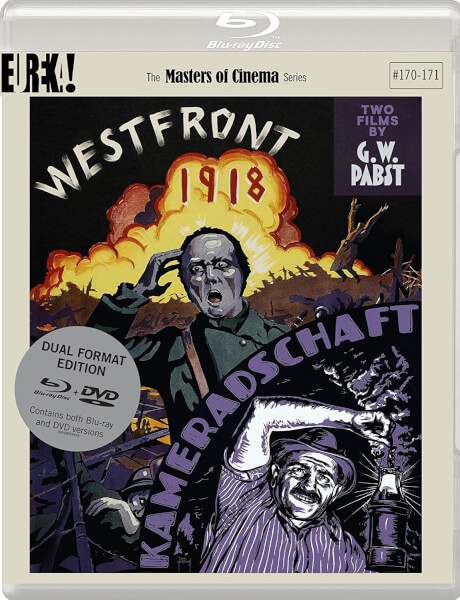 Jamie Havlin takes a look at two German classics from the 1930s by director G.W. Pabst.

Based on Ernst Johannsen’s novel Vier von der Infanterie, Westfront 1918 can be considered one of the greatest anti-war films of the twentieth century and when he was making it, Georg Wilhelm Pabst was thought of as one of the finest German language directors along with Fritz Lang, Ernst Lubitsch and F.W. Murnau.

A technical innovator in the early days of talkies, Pabst also played a vital part in making Greta Garbo and Louise Brooks worldwide icons and he also worked with Lotte Lenya in his adaptation of Brecht’s The Threepenny Opera.

Despite later showing us the futility of WWI and the painful physical and mental stress that the main characters must endure, Westfront 1918 opens on a relaxed note in a French inn where a group of German infantrymen are billeted. Here they sing, play cards, drink and enjoy some banter with a French girl Yvette, who is attracted to one of the soldiers, a shy young man known as The Student.

Before long, though, there’s a blackout. Sirens blare and bombs sound. Back in their dugout, the ceiling begins to give way with rubble seeping into their quarters at an alarming rate, the men having to save themselves from being buried alive by holding up the ceiling with their hands and heads. It’s a horribly claustrophobic scene and from this point on the director seldom skimps on the bleakness.

Life in the trenches is beyond grim and to make matters worse rumours abound about civilians almost dying of starvation back home – and when one of the soldiers Karl is given some brief leave he finds that his wife has cheated on him. As it turns out with a butcher’s assistant in order to gain some scraps of meat.

‘Why can’t you just make peace out there?’ she asks Karl shortly before he returns to the carnage of the Western Front. It’s a question that every sensible person should surely have been asking at this stage of the conflict.

Westfront 1918 does have a couple of moments that could be considered superfluous and the scene at the cabaret bar does overextend itself but on the whole it is a harrowing watch that despite being over eighty years old retains its power. One image involving a hand (I’ll say no more) really proves to be one of the most haunting in cinema history.

Kameradschaft (Comradeship, 1931) is another emotionally potent film. Again the setting is largely claustrophobic and the story is based loosely on a real incident from early in the century when over one thousand French miners died despite the help of a team of German miners.

Here a similar scenario takes place in the aftermath of the so-called Great War. A mine that straddles the new border between France and Germany has been divided. A fire breaks out in the French side and, despite attempts to contain it by speedily erecting a brick wall, it spirals out of control.

Germans rush to embark on a highly dangerous mission to rescue the trapped Frenchmen from their subterranean nightmare, well, as one of their leaders explains to his wife, if the situation was reversed he would hope the French would respond in the same way.

At this stage in his career, Pabst was seen as a progressive, an internationalist who despised war – perhaps influenced by the time he’d spent interned as an enemy alien in a French P.O.W. camp prisoner during WWI.

His reputation, though, inevitably declined after the start of World War II, when he was co-opted by the Nazis to make propaganda films on their behalf – even though, incidentally, Josef Goebbels had denounced Westfront 1918 on its release as ‘cowardly defeatism’, the film being suppressed in the years following Hitler’s seizure of power.

Pabst went on making movies after hostilities ended but his reputation was never rehabilitated.

The Masters of Cinema Series presents both these titles for the first time ever on Blu-ray in a special Dual Format edition.

Extras include optional English subtitles, introductions to both films by film scholar Jan-Christopher Horak and a booklet featuring a new essay by Philip

For more on the films check here.