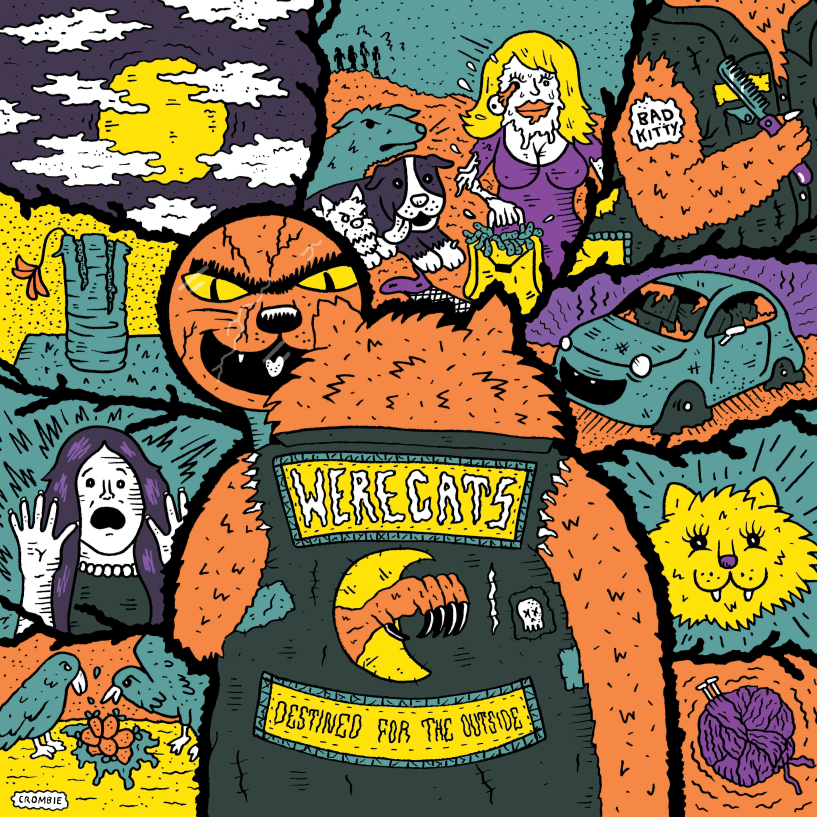 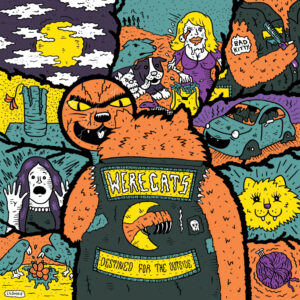 Coming some two years after the ‘My Boyfriend’s A Werewolf’ 7” we finally get ‘Destined For The Outside’ the long-awaited debut album from South London’s Werecats; they might have made us wait, but it was certainly worth it!

We get twelve tracks of fizzed up exuberant punk thrashings delivered on either vivid orange, or luscious purple vinyl wrapped up in a dayglo sleeve courtesy of the genius that is Dan Crombie.

Opener ‘Astbury’ lays out the ‘Cats stall; back to basics 3-chord insanely fast punk rock – no attempt to push musical boundaries, what’s the point when you can combine car crash beats, riffs and sweet harmonies whilst hollering “Astbury Castle is a really fucking awesome place / Astbury Castle’s where I shove cider in my face” which thankfully addresses any concerns that this may have been some sort of homage to The Cult frontman and Morrison stand-in.

It’s the purity of the Werecats that just brings a huge grin to your face; simple songs addressing everyday issues; everyone who has ever engaged in home improvements will immediately connect with ‘Builder’ and the refrain “He’s late again, got no sense of urgency” delivered over a sound that reminds me of the likes of The Spivs, and pretty much anything ever released by Damaged Goods Records, with also a generous nod to Shonen Knife which can never be a bad thing!

‘Dog’ kicks off with an obligatory bark, and is underpinned with a tasty bass groove, riding over the top are the sweet dual vocals of Pippa and CiCi, hidden within these harmonies however is a tale of man’s best friend ripping to death rabbits in the local park… which is perhaps were you might find ‘Zombie’s’ – at least zombie’s with handbags and fashion mags, and “plastic pneumatic tits” apparently… as befits the title it’s a lower tempo which then introduces the ‘slow zombie / fast zombie’ supremacy conundrum, but I digress.

‘Heroin’ might fuck you up, but Werecats still manage to carve a happy-go-lucky belter out of the subject that could/should be a single, ‘Toast’ is devoid of vocals and has a darker, ominous undercurrent, whilst ‘Snakes’ should see you hurling yourself around the room, a joyous headrush of neat guitar slashes and ascending vocals, similarly with ‘Mr Boring’ which comes complete with nailed on “tra-la-la” harmonies.

‘Destined For The Outside’ is crammed with energetic, melodic punk gems, it’s got a fun packed, party zing to it, that in days as dark as these is a very welcome distraction. 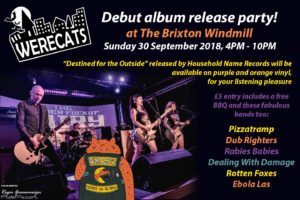 ‘Destined For The Outside’ will be released on Sunday 30th September at an album launch party at The Windmill, Brixton; The Werecats will be supported by Pizzatramp, Dub Righters, Rabies Babies, Dealing With Damage, Rotten Foxes, and Ebola Las.

Further details, times etc are available on the Event Page.

Pre-Order ‘Destined For The Outside’ at Werecats Bandcamp