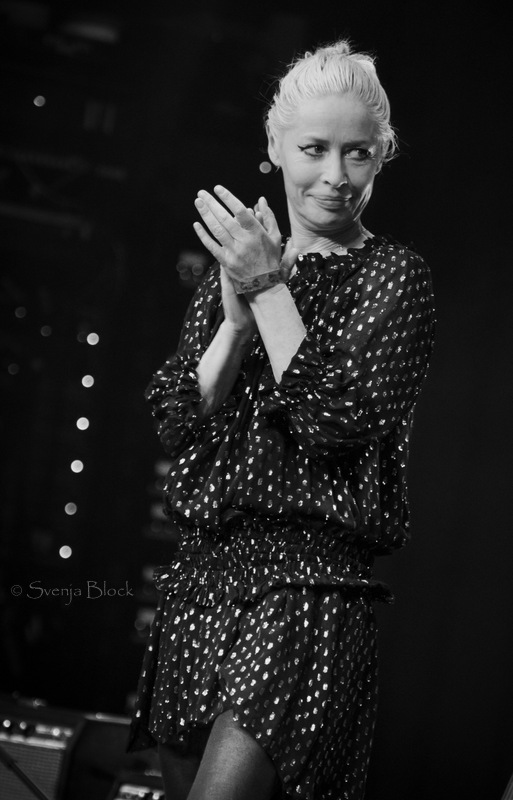 Wendy James is back in the UK promoting her recently released LP “The Price Of The Ticket”. Photos by Svenja Block and words by Craig Chaligne.

The former Transvision Vamp lead singer is in the middle of a UK your that sees her promote her (excellent) third solo LP “The Price of the Ticket”. Recorded in New York City with a rather stellar cast of musicians (Lenny Kaye on guitar, Glen Matlock on bass and James Sclavunos on drums), the album could best be described as being a mix between Nuggets era garage rock, 60’s girl group, New York seventies punk with a little bit of country rock tinge thrown in for good measure, probably her best work so far.

The band opened with “Paloma’s Down”, the opening track from the album followed by the grungy “Bad Intentions and a Bit of Cruelty”. “King Rat” with its repetitive guitar pattern sounded like a cross between Link Wray’s “Rumble” and The Shangri-La’s. Despite being centred round the new album, we were treated to generous helpings of Wendy’s back catalogue with “Tell That Girl To Shut Up”, a song covered by Transvision Vamp but written by Holly Beth Vincent in 1979 and recorded by her band Holly and the Italians. An urgent version of “I Want Your Love” was followed by “I’m Freaking Out” and the Jean-Genie-esque “You’re a Good Man Sister”, both from her days fronting Racine.

More highlights from the new LP followed with “You’re So Great” (written by MC5 guitarist Fred Sonic Smith), “Indigent Blues” (surely one of the best tracks on the album) and “Love From the 9th”. Backed excellently by James Scalvunos on drums, James Meynell on bass and Louis Elliott on Guitar, and playing a beautiful Fender Mustang on most of the songs, Wendy looked delighted to be back on a UK stage. More Transvision Vamp songs followed (“If Looks Could Kill”, “Baby I Don’t Care”). Stripped from the eighties sheen of the original recordings, they fitted nicely along “Speedball” and “Farewell to Love” (described by Wendy as her “June Carter Cash moment”). The encore finished with a glorious version of “You’re a Dirtbomb Lester” that prompted Wendy to promise she would be back soon.