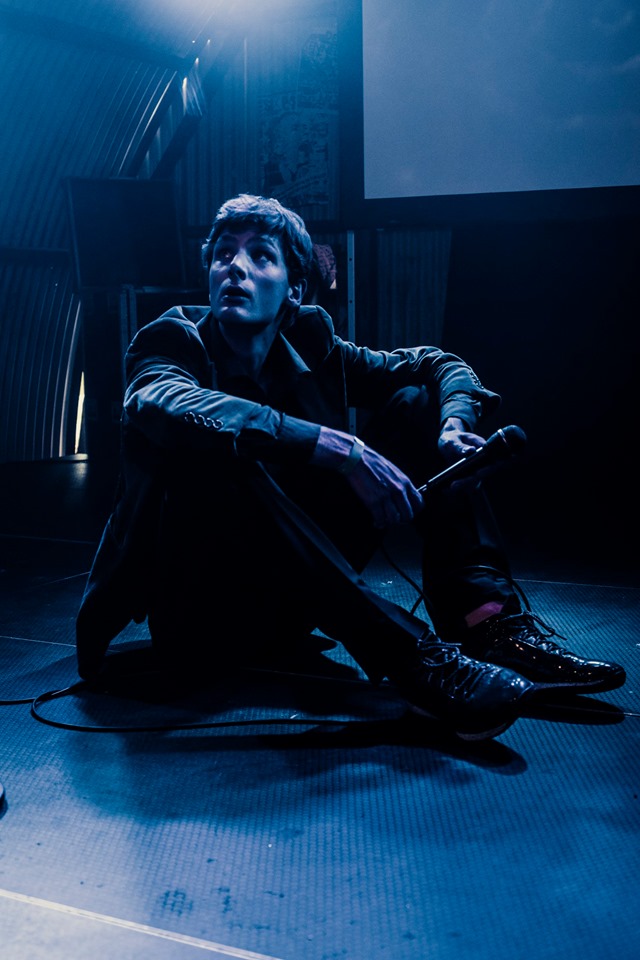 Is it right, or proper, to call a festival sensual? It depends on how you deploy the word, I suppose. Sensual was the first word that stuck when I tried to think of a narrative arc for the seventh edition of Welcome to the Village. For sure, Leeuwarden (the city which hosts it) isn’t the first city in the Netherlands I’d call sensual. And when the grounds fill up with day trippers from the city and suburbs and the booze begins to flow, the scene is closer to something from the elder Breughel than the works of Lee Bul. 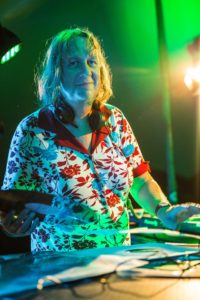 Regardless, Welcome to the Village *is* sensual in that it balances societal concerns and earthy fun in a manner that never feels you’re being preached to or taken for a mug. For sure the senses were stimulated by the music and the interesting grub and booze on offer. But many of the things that secretly concern us (the environment, waste, ageing societies and isolation), were dexterously and subtly woven into the fabric of the festival days without you really noticing it. To use another, depressingly utilitarian word bandied about by earnest marketing types, Welcome to the Village is “performative”. Performative in quietly forcing many a festival goer to see that new ways of thinking and behaving can be everyday actions. Take the ideas around taking home one of the site’s potted plants, or a tea cosy specially knitted by an elderly volunteer. These are generous initiatives that are more likely to make you stop and think about the story behind the item, or indeed why the gesture was needed in the first place.

Welcome to the Village is performative in other ways. There has always been a strong theatrical element to the festival’s programme. This year Christeene’s mighty review queered up many a Frisian headspace and Club Gewalt invoked the spirit of Nina Hagen in their festy show Wir Zind Amazone, which had to be seen to be believed… For their part, Ménage À Trois managed to beam in an emotional meltdown in De Grauwe Kat on the Sunday evening. Even if you hadn’t pencilled anything in, just wandering about during the daytime brought you into contact with actors, or stalls doing something weird. It could be a bunch of white coated loons experimenting with Heath-Robinson-style contraptions, or a stall asking for your faeces (to help fertilise the ingredients for your sandwich, of course, and why not?). Whether it all works, or is your thing isn’t the issue. It’s there, and you have to compute it in as part of the deal.

Back to the realm of the senses. Two brilliant solo performances that opened the Saturday and Sunday programmes in the Blessum mirror tent acted as an emotional rope bridge for those lucky enough to catch both. These two gigs, by artists from the Russian Federation and Iran (and though concerned with two different disciplines and socio-cultural headspaces), showed the value of music as soft power. In both music was used as a sonic emissary, making us realise that our own preconceptions around this art form are often just one grain of sand on a very big beach. Masha Vahdat’s extraordinary show on Sunday drew on Iranian poets and artists past and present to create a rich emotional hinterland that the audience could wander through in total safety, almost as the firstborn through Eden. That may sound like hyperbole but there is no way to adequately describe the extraordinary bond Vahdat’s music created between her and the audience. Accompanied only by a dampened mic and a frame drum (a Daf?), Vahdat’s skills were breathtaking. Holding and elaborating quarter tones – often in a mid range – is not an easy skill as any singer will tell you. That she managed to do this and other vocal tricks effortlessly, almost unnoticed, and then to make her songs emotional lodestars for to the crowd to use throughout the day was a testament to her shamanic powers. Blessum was rapt, and able to catch on to her spirit that soared over the elephantine thud of the kick drum being tested during Feng Suave’s sound check on the main stage outside.

Then we had Kate NV’s show, which was the perfect antidote to a damp and drab Saturday midday. La Shilonosova has changed her approach to her live sets markedly since we first saw her perform solo a few years back. There is a new focus; a more supple and subtle application of her powerful – and very warm – personality, and a sense that her seemingly never-ending work regime is paying off in unexpected ways. Her music is like a dayglow electronica kids birthday party, or a Nara painting set to music. And her live outings have always been fun and inventive. But in Blessum there was a new gravitas and surety on display. Kate NV’s repertoire has been stretched and dismantled, recreated to feel like it’s multidisciplinary music. Maybe she’s reinstated mnemonic elements of her old Moscow Scratch Orchestra days into her present set. Regardless; her approach is now all about looking backwards and forwards to create something very much of the now. Wine glasses and other objets trouvé were hit, and mixed in by a deft flick of a switch into a wider, more funky passages. Other, quizzical aural chop ups were redolent of 1970s Russian painters and high gloss 1980s pop. All the while this funny, driven personality cast her spell over the audience. 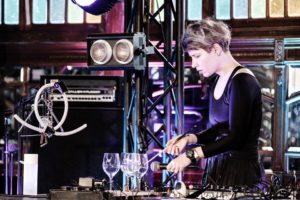 What else? Sadly deejay duties elsewhere on the Saturday meant we missed a killer one-two in the Anderson shelter-type structure known as De Grauwe Kat. The first real miss was undoubted pop talents of Vilnius’s ShiShi (though you can take our review of their MENT gig as bible). According to those who were there, ShiShi’s rambling yet charming explanations of their songs – nay, their entire lives to date – and chiming guitar pop went down a storm. We also heard that Rotterdam’s Sweet Release of Death made that stage’s metal walls vibrate like a proper wind tunnel. Trust us, you need to tune in to both. Tiredness meant we missed what sounded like a brilliant Saturday night in the Bongo tent, too; Afework Nigussi, Oscar Jan Hoogland Onno Govaerts and Terrie Ex apparently deconstructed space and time whilst the members of King Ayisoba’s retinue cranked up some hot acoustic Ghanaian trance. In retrospect we’re furious to have missed this.

Still we did get to see DJ Marcelle play one of the defining shows of the 2019 edition. Marcelle is an acknowledged wizz on the decks. Somewhere among her zillion records, there lies the information that will prove the Sphinx is 12 thousand years old and once had a female lion’s face. All her crowd knows this. What was truly great about her set at Welcome to the Village, though, was the window it opened up on this country’s recent past. The crowd, a sparky mix of 40-50 somethings and rebellious teens had that feeling of a normal Dutch night out from the 1990s and early noughties; that is to say people who were rude, open, brazenly independent, scruffily self-reliant, sometimes idiotically Utopian, but on the whole forgiving and funny. They danced maniacally around the Zuidereind peninsula, displaying the sort of openness that would have treated today’s righteous intolerance and prissiness with the same quizzical contempt as their former selves from 20 odd years ago. What Marcelle’s brilliant, mercurial set (involving 3 or 4 turntables, and hoovering up references like an ant-eater ploughing through an ant nest) highlighted was something more intangible. Namely, the realisation that this country has had far too many of its rough edges removed over recent years, making many of its creative and social initiatives bland and formulaic. And, most worryingly, in thrall to the balance sheet and an idea of an online neatness that borders on social exclusivity. The show somehow acted as an invocation to a long-lost and – to my mind at least – desperately needed time and headspace. 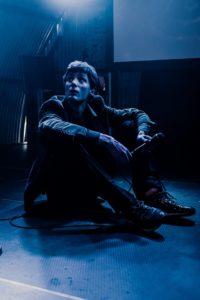 Time for three more gigs that happened on Sunday. King Ayisoba’s Bongo All Stars set on the Bontebok stage was a delight; the King indulging in a form of crowd banter that still sounded like a Regimental Sergeant Major screaming blue murder at a bunch of deloused squaddies.  The audience frugged in an African style as best they could, whilst the whirring, clattering, rumbling rhythms cooked up by the likes of Ayune Sule and Ayisoba (backed at one point by The Ex’s Arnold de Boer) set down a relentless pace. A superb show, with Wicked Leaders being a glorious highlight. Sadly Moscow’s Lucidvox sounded great only if you stood close to the monitors. Then you could hear Galla’s thunderous and inspiring guitar lines and the hard-soft interplay between Nadya’s powerhouse drumming and Anna’s supple bass lines. There, you could appreciate Alina’s Rusalka-like voice. The band knew they were giving a good performance, as did the first few rows who really dug it, but sadly PA issues beyond their control meant that their punch wasn’t fully felt amongst a largely sympathetic audience. They’re a great band who really need great sound to show off their apocalyptic talents.

Finally we turn to Mart Avi, who was wrapping up his first Dutch club tour proper in De Grauwe Kat and feeling slightly frayed after an intense week. Regardless of what you know, or expect, there is always the hint of the unexpected with Avi. Many miss this element of his creative psyche, being sucked up into the lush pop world he creates, whilst not really taking time to wonder why it’s all so moreish. And on this sunny Sunday evening any hint of weariness was cast aside and another glint from Spectrum Avi beamed through the venue. Groovers were witness to a visceral performance that highlighted his Gabriel Ernest side rather than his reputation as a C21st soulboy. The lush Bogus Mannerisms of tracks like ‘The Silent Trespasser’ and ‘Here the Future Smells Like Perfume’ bounced and bumped off the domed tin roof. And Avi, like the veritable cat himself, hopped and jived about, unable to find any space to get comfortable in, but trusting the last fragments of his larynx to deliver. Over time, an existential funk gloop formed, aided by crooner time-warps, flinging us back to 1930’s or 1950’s musicals. Avi’s red-toothed showmanship and the big C21st beat also trapped many a curious grazer at the venue entrance. All in all it was a fabulous way to end his week and this festival. So good in fact I didn’t even notice the replacement bus service. The power of music, don’t underestimate it.